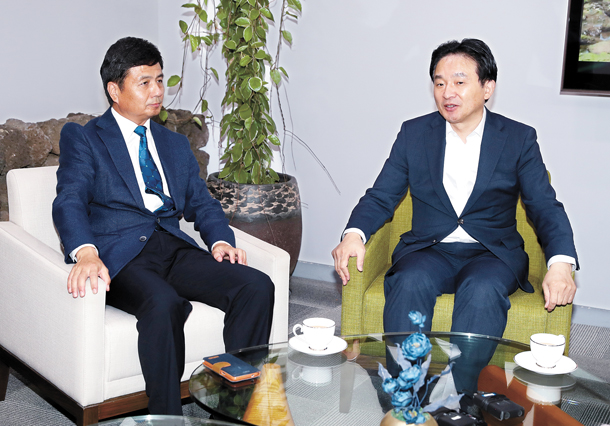 The Chinese deputy consul general on Jeju conveyed his regret for the incident in which a Chinese tourist stabbed to death a Korean woman on the island, as he met with the governor of Jeju Special Self-Governing Province on Monday.

“I convey my deepest regrets for what happened,” said Deputy Consul General Liu Zhifei. “I hereby send my condolences to the victim and the family of the deceased.”

A Chinese tourist, a 50-year-old man surnamed Chen, stabbed a Korean woman in her 60s while she was praying at a cathedral on Saturday. She was moved to a hospital but was pronounced dead the next day.

Chen had entered the island visa-free on Sept. 13 and was to stay until this Thursday. He was apprehended by authorities a few hours after the incident and faces charges of murder or attempted murder.

“The incident does not represent all Chinese tourists in Korea,” Liu added. “As many as three million Chinese tourists to Korea have been well received and welcomed and China has been educating all tourists who leave the country to keep up with the host country’s laws.”

Still, public criticism against the free-visa policy for Chinese tourists coming to Jeju Island has been mounting since the incident.

A petition titled “Abolish the free-visa policy on Chinese tourists visiting Jeju Island” surfaced in an online community on Sunday and received more than 12,000 votes within two days.

First established in 2002 on the island, the visa-free policy currently allows visitors from 189 countries to visit the island without a visa and stay for up to 30 days.

“To prevent such incidents from happening again and to ensure the continued development of Korea-China relations,” said Won Hee-ryong, governor of Jeju, “Korea and China will have to cooperate fully.”