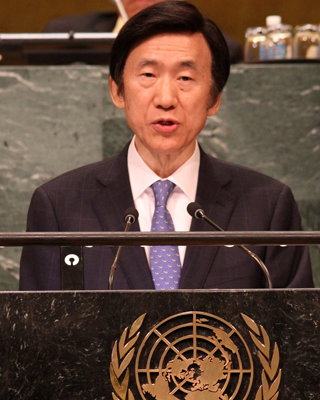 South Korean Foreign Minister Yun Byung-se questioned whether Pyongyang is qualified to be a member of the United Nations as he strongly condemned the regime’s continued nuclear and missile provocations in his address to the UN General Assembly.

Yun said that North Korea “has manifestly failed to uphold its pledge to abide by the obligations in the UN Charter, particularly to accept and carry out the decisions of the Security Council,” in his keynote speech at the ongoing 71st UN General Assembly session in New York Thursday evening.

“I believe that it is high time to seriously consider whether North Korea is qualified to be a peace-loving UN member,” he continued in the speech, which focused nearly entirely on how to strongly respond to Pyongyang in the wake of the regime’s fifth nuclear test earlier this month.

Calling Pyongyang’s fifth nuclear test on Sept. 9 “the strongest ever,” he warned that it showed that the regime’s “nuclear programs have neared the tipping point.”

Yun went on to call upon the UN Security Council to “adopt stronger, comprehensive sanction measures” that go beyond UNSC Resolution 2270, which in March implemented the toughest-ever sanctions on Pyongyang for its fourth nuclear test in January and long-range missile launch in February.

The South Korean envoy said that a new resolution “should close the loopholes” and “further expand and reinforce existing sanction measures.”

Both Koreas became members of the United Nations in 1991.

North Korea, Yun pointed out, is the only country that has conducted nuclear tests in this century and has conducted 22 ballistic missile tests this year alone.

He said such actions show that North Korea is “totally ridiculing the authority” of the United Nations and the Security Council.

Yun emphasized that North Korea, in contrast to the South, “has failed” because of its “fanatical and reckless pursuit of nuclear and missile programs.”

He pointed out that North Korea is estimated to have spent at least $200 million U.S. dollars for this year’s nuclear tests and missile firings, which could have been used for humanitarian causes within the country.

“North Korea’s human rights abuses should no longer be allowed any impunity,” he said. “Now is the time for action.”

But some legal experts pointed to the dangers of casually attacking North Korea’s qualifications as a member state of the United Nations, especially at a time when Pyongyang should be encouraged to adhere to international norms, calling Yun’s remark more rhetoric than realpolitik.

“While there are clear procedures to join the United Nations, the UN Charter does not specify how to withdraw,” said international law expert Lee Ki-beom, a research fellow with the Asan Institute for Policy Studies.

“Remarks calling for the reconsideration of North Korea’s qualification as a member of the United Nations can be dangerous because we should not be giving Pyongyang a pretext to walk away from its obligations to the UN.”

He continued, “What we need to be doing is encouraging North Korea to stay in the United Nations and abide by the UN Charter and Security Council resolutions and hold it accountable to its responsibilities.” Lee added, “Veto-wielding countries in the UN Security Council, China and Russia, would never allow the North to leave the United Nations, and the United States would not agree to this either, so I am not sure why Minister Yun made such a suggestion.”

“I would like to believe he made the remark rhetorically,” he added, “as a measure of putting pressure on North Korea.”

On Wednesday, 43 countries party to the Comprehensive Nuclear-Test-Ban Treaty, in a ministerial meeting on the sidelines of the General Assembly, also issued a joint statement condemning in the strongest terms Pyongyang’s nuclear tests.

The Korean Ministry of Foreign Affairs said in a statement, “The two sides shared the position that the international community has to take speedy and strong measures in order to make North Korea pay for such reckless provocations, starting out with a stronger, new resolution produced by the Security Council.”