Cellphones drag down ICT exports by 8.5%

Cellphones drag down ICT exports by 8.5% 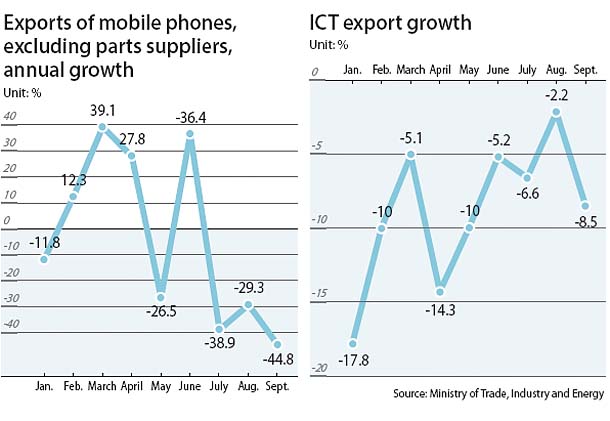 Exports of information and communications technology (ICT) fell for the 12th consecutive month as cellphones and televisions remained weak in foreign markets.

ICT exports declined 8.5 percent year-on-year in September to $14.5 billion, the Ministry of Trade, Industry and Energy said Thursday. After posting a year-on-year decline of 1.6 percent last October, exports have continued a downward slide.

Exports of cellphones fell 33.9 percent year-on-year to $1.87 billion, and those of semiconductor products fell 2.6 percent.

The ministry cited mid-priced smartphones produced by Chinese manufacturers, as well as the failure of the Galaxy Note7, as the biggest factors in the collapse of cellphone exports.

Mobile phones, when excluding parts suppliers, saw exports plummet 44.8 percent compared to a year ago. Mobile phone exports have been on a decline for the past four consecutive months, after a 27.8-percent year-on-year increase in April turned into a 26.5-percent drop in May.

The export of mobile phones has been shrinking in major markets, including China, where it plummeted 41 percent, the U.S., down 30.6 percent, and EU, free-falling 68.2 percent.

Vietnam was the only market that saw an increase, where Korean mobile phone sales were up 5.32 percent from a year ago.

Although Samsung Electronics still holds the largest market share of 22.7 percent as of the second quarter, according to Strategy Analytics, its market share has slightly dropped from 23.7 percent in the first quarter.

The release of its latest smartphone, the Galaxy Note7, was supposed to help regain its global market share and widen the gap with rival Apple, whose market share was at 11.8 percent. While Samsung and Apple’s market share in the second half retreated from the first three months, Chinese smartphone manufacturer Huawei has seen its share grow from 8.5 to 9.4 percent.

The debacle with the Galaxy Note7, which led to Samsung Electronics halting all sales earlier this week, is expected to further drag down the nation’s ICT export growth for this month.

Display panel exports also fell compared to a year ago but its drop was eased compared to previous months thanks to the price increase of LCD panels and growing demand for OLED panels.

Display panel exports were reporting a 20-percent year-on-year drop earlier this year. But in September, that drop eased to 3.9 percent, with exports of display panels amounting to $2.79 billion.

Exports to China reported the largest figure at $7.8 billion, but this is an 11-percent drop compared to a year ago - excluding Hong Kong, it’s a 16.4-percent drop.