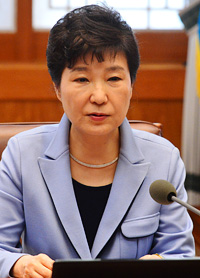 President Park Geun-hye said Thursday she does not condone any illegalities in her pet projects to promote Korea’s culture and sports, giving the green light to prosecutors to go after an influence-peddling scandal involving one of her longtime friends, two nonprofit foundations and conglomerates.

“Through the National Assembly audit, many suspicions were raised about two nonprofit foundations,” Park said in opening remark before a senior presidential secretariat meeting. “I feel heavyhearted as suspicions produce more suspicions amid the people’s hardships, while distrust is growing.”

She then denied that two nonprofit foundations were created to raise slush funds to be used after her presidential tenure. “There is no reason to do so, and that is also not true,” Park said.

Opposition lawmakers and media have raised a series of power abuse allegations involving Choi Soon-sil, a daughter of Park’s former mentor Choi Tae-min, and two nonprofit foundations. The longtime friend of the president was accused of using her influence in the creation of the cultural and sports promotion foundations and in their operations and fundraising.

In a separate but related scandal, Choi’s daughter Chung Yoo-ra, a dressage athlete, was accused of having enjoyed special status at Ewha Womans University. The school was accused of admitting Chung unfairly and changing school regulations to meet her needs. Ewha’s president Choi Kyung-hee resigned Wednesday over the scandal.

The K-Sports Foundation is also suspected of offering special treatment to Chung.

“If anyone committed illegal acts concerning the foundations, including misappropriation of funds, stern punishment will be handed down,” Park said. “I am saying this in order to stop any unnecessary controversy in the future.”

While Park made no mention of her friend Choi, the remark was interpreted as a signal to the prosecution to investigate her.

“Because Choi’s involvement was clearly revealed in media reports, Park decided that a thorough investigation into her is unavoidable,” a senior presidential aide told the JoongAng Ilbo. “Although there are various rumors about the relationship between Choi and Park, the president has no reason to shield Choi. The prosecution will soon summon Choi, who is currently out of the country, and question her.”

Until now, the prosecution has been lukewarm toward the case, even though a civic group filed a formal petition earlier this month to demand an investigation into Choi and An Chong-bum, presidential senior secretary for policy coordination, for strong-arming conglomerates to make massive donations to the foundations.

Opposition lawmakers have questioned the prosecution’s will to go after Choi, because the team has only three prosecutors including its chief, while more than 100 suspects and witnesses need to be questioned. They visited the prosecution on Thursday to demand a speedy and thorough probe.

The attitude of ruling party loyalists to the president also changed. They no longer dismiss the scandal as a groundless political attack by the opposition. “The prosecution must sternly investigate the Choi case,” Saenuri Chairman Lee Jung-hyun said Thursday. “She must be punished if the accusations are true. If not, political attacks must be stopped.”

Park issued a lengthy defense of the two foundations, explaining their history, goals and accomplishments. She also expressed her appreciation to the conglomerates for having sponsored the programs.

It remains to be seen if Park’s response will stop the scandal. JTBC, the TV network of the JoongAng Media Group, reported Wednesday night that Choi has edited Park’s speeches, fueling suspicions that she was more than a mere presidential friend and that she influenced state affairs.

“What she loves the most is editing the [president’s] speeches,” Choi’s close associate Ko Young-tae told JTBC. “When the speech she edited creates a problem, she yells at the wrong people.”