Evolution of computers is told in Seoul museum

Evolution of computers is told in Seoul museum 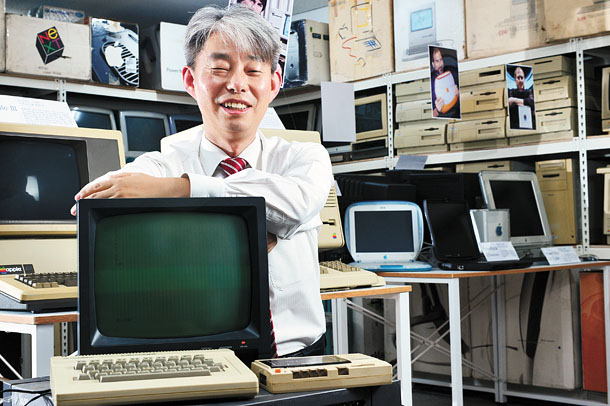 Kim Kwon-tae, head of the Korea Computer Museum, poses next to his first computer model, a Goldstar FC-30 equipped with an 8-bit CPU, manufactured in 1982. [JANG JIN-YOUNG]

Hundreds of vintage computers are showcased in the basement of a humble building located in Guri, Gyeonggi.

From the antique-ish Apple II series manufactured in 1977 to the breakthrough iMac lineup, the cramped space is home to as many as 10 models attributable to the late Steve Jobs — and many more non-Apple computers.

“There are many products Jobs created that are worth keeping,” said Kim Kwon-tae, operator of this one-of-a-kind warehouse known as the Korea Computer Museum.

The Korea Computer Museum just held an exhibition dedicated to Steve Jobs to commemorate the fifth anniversary of his death.

The museum owns 420 computers, including models manufactured as far back as the 1920s. That oldest machine, called a “comptometer,” does automatic calculations.

Carefully browsing through the collection, Kim announced that he had something interesting to show a reporter. He took out a floppy disk, one of the early storage devices for computers.

He slipped it into an Apple 2e, the third model of the Apple’s II series. After a few seconds of a familiar machine melody, Pac-Man popped up on the screen, an early computer game with flat graphics and rudimentary rules.

“I regularly turn them on and off to make sure they don’t go out of order,” Kim said. “It’s like feeding them with electricity.”

The 48-year-old Kim, who runs a webpage managing company, started collecting computers 10 years ago. He remembers the first computer he ever got his hands on.

“It was back in 1983 when I was a middle school student that I bought my first computer, called the FC-30, which had an 8-bit CPU by Goldstar [a former name of LG],” Kim said.

“I searched online tenaciously until I could finally get my hands on one.”

Kim said vintage computers will someday have the same value as other artifacts of the past.

“Just as celadons from the Goryeo era are on display at the National Museum of Korea, computer models and what programs they used will be valuable to the future generation, which is why I believe they should be preserved,” he said. One of his big motivations for running the museum is to “provoke the imagination of children.”

Kim relied mostly on the international e-commerce site eBay to obtain diverse types of computers. He traveled all the way to Japan to get his hands on a single rare model.

“Computers manufactured by foreign companies are pretty easy to find,” he said. “The ones developed in Korea are harder to find.” Koreans have been too focused on going forward with technology to preserve the past.

The Steve Jobs exhibition will run through Nov. 27 at the warehouse. Only people who make reservations online can get in.
Kim said he is going to hold a special exhibition every two months.

“It is my ultimate objective to get a larger space to establish a proper computer museum,” he said.