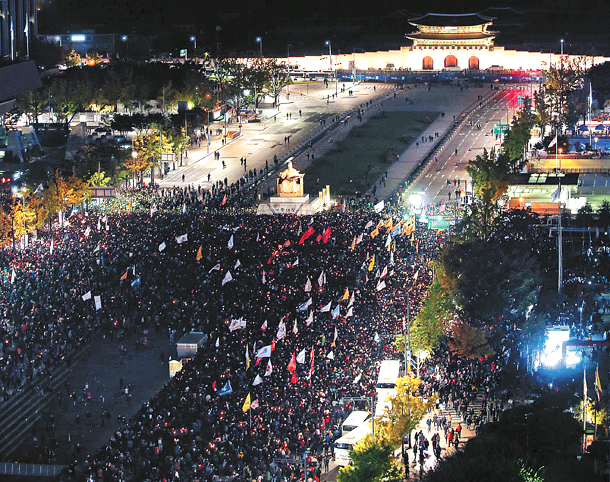 Tens of thousands of people stage a rally on the roads in front of Gwanghwamun, central Seoul, Saturday night, to urge President Park Geun-hye to step down over the influence wielded by her longtime confidante Choi Soon-sil. [OH JONG-TAEK]

An estimated 30,000 people gathered at the Cheonggye Square, just two kilometers (1.2 miles) from the Blue House, in protest of Choi’s alleged influence behind the scenes in swaying President Park. Saturday’s rally, organized by an association of civic and labor groups including the Korean Confederation of Trade Unions (KCTU), was the biggest demonstration since the so-called Choi-gate scandal erupted.

People who took part in the candlelight street rally varied in age, gender and background, and included many who said they voted for Park in 2012.

“I decided to join the candlelight rally today because this total nonsense involving President Park and Choi has reached well beyond its limit,” said Shin Sook-hee, 40, who came from Suwon with her 10-year-old daughter. “I came here with my daughter because I wanted her to know that participation in demonstrations like this can change her future,” said the mother.

Many came to the rally individually rather than in groups. Many political rallies in the past were driven by civic group and labor union members. But Saturday, many participants were college and high school students, some wearing their school uniforms.

Ewha Womans University has been implicated in one of the branches of the scandal, having been accused of giving special admission treatment for Chung Yoo-ra, Choi’s daughter. Ewha’s president was forced to quit two weeks ago over that part of the scandal. The university’s involvement has angered many Koreans in their teens and 20s.

Five high school students were seen holding a banner with a message to the president: “We are taking the college entrance exam in 20 days but have decided to go out to the streets because we are appalled by your incompetence and deception.”

“We are out in the streets today because we feel the basic tenants of democracy have been shattered by the president herself,” said Won Seung-jae, a high school senior from Incheon.

In mockery of President Park’s mysteriously deep relationship with Choi, one demonstrator held up a picket that read, “I thought I was paying taxes, but I was paying a fortune teller instead.” Choi’s father Choi Tae-min, who died in 1994, was the founder of his own cult, Yeongsegyo, literally “Eternal Life,” which combined elements of Buddhism, Christianity and Korea’s indigenous Confucian-shamanist movement, Cheondoism.

One picket held by a rally member read, “I came here to repent my voting for Park Geun-hye four years ago.”

Protestors walked toward the Blue House from the Cheonggye Square but were stopped by a police line near the Statue of King Sejong in Gwanghwamun Square.

The rally began at 6 p.m. and ended around 11 p.m. without injury or conflict with the police. The Seoul Metropolitan Police Agency issued a statement Sunday thanking rally participants for cooperating with the police in an orderly manner, a rare move by the authorities.

At the rally, Seongnam Mayor Lee Jae-myung demanded Park step down immediately, arguing the country would be better off without her in command. “Some say her resignation would bring about more chaos. But it can’t get any worse than what has become now,” said the mayor to cheers.