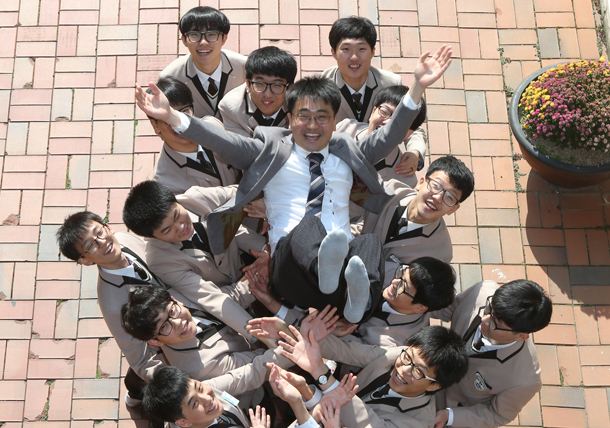 “I am thankful I was able to help my mom with the chores today by doing the laundry,” wrote Kim Yong-hyun, a senior at Ulsan Meister High School, on his “Thank You Note.” Below Kim’s writings were comments from his mother that read, “I know that you’re busy studying, but thank you for taking the time to help me out.” Kim’s teacher added, “Your energy might have come from your mother. Keep up the good work.”

Each day, students at Ulsan Meister High School write three things they’re thankful for, and parents and teachers also participate. The “Thank You Note” program was the idea of Kim Se-young, a teacher who headed character education at the school for the past four years. “Appreciation is a feeling that comes from positive thinking,” Kim said. “It wasn’t easy for students to get into the habit, but they’ve changed so much and now they look for the positive in everything.”

Kim was awarded for his efforts on Nov. 10 with the fourth grand award for Korea’s character education. The award is cosponsored by the Ministry of Education, the Ministry of Gender Equality and Family and the JoongAng Ilbo.

“Given the fact that high school is the last place where students can build their characters,” he says, “I can’t emphasize character education enough.”

Kim spent three years systemizing the school’s character education program, which now focuses on four sectors - character education, art, history and perseverance. One of the ways in which perseverance is taught is with an eight-hour hike that students and teachers take every month except November and December.

“Getting to know each other through conversation,” says Kim, “is great character education in itself.”

Song Baek-kyu, a teacher at Choji Middle School in Ansan, Gyeonggi, is also the winner of the grand award. Song directed a series of programs focusing on key relationships - friendships, family relationships and teacher-student relationships - that he believes are critical in character education. From 4 p.m. until the school finishes at 9 p.m., students carry out tasks to help them become closer to their classmates, family members and teachers. These tasks include writing letters on leaves and taking pictures together.

“When I first came to Choji in 2011, there were many students who didn’t fit in,” Song says, “but the school atmosphere changed so much after implementing a series of programs.” Three years into running the program, Choji was named an outstanding school for preventing school violence.

The third recipient of the grand award, Kim Soon-ja, is the principal of Eonyang Elementary School in Ulsan, where students’ singing can be heard every morning. Kim picked 12 important virtues for the school, such as rule-abiding and respect, and focuses on one of them each month. Students sing about the chosen virtue and change their greetings according to it. In November, cooperation was selected as a virtue, filling the school with the song “Tell me I can do it” and the greeting “I’ll cooperate with you.”

“The program helps students realize the meanings of virtues in their daily lives,” Kim explains.

When she was appointed to Eonyang, Kim built about 60 sports and entertainment facilities such as a basketball stand and a whack-a-mole machine, believing that such outlets help build character. Although parents were skeptical at first, they later said they were happy their children were learning how to balance between work and play.

“I once believed academics contribute to talent,” Kim says, “but now I know character is the key to true talent.”