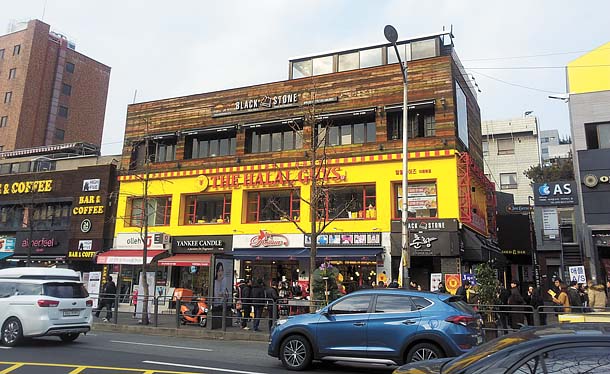 An estimated 900 customers dined at The Halal Guys, a fast-casual restaurant in Itaewon, central Seoul, on its first day in Korea. A crowd of about 140 was lined up outside when the doors opened. [MONICA WILLIAMS]

About 150 people were lined up on the cold sidewalk at 11 a.m. Saturday, when The Halal Guys opened for business for the first time in Itaewon, central Seoul.

Some came for a chance at one of the free meals that the restaurant was giving away; others were curious about the long lines. But most had been anxiously awaiting the arrival of the yellow-and-red storefront serving meat-and-rice platters.

Long lines have been common for more than 25 years at The Halal Guys food cart on 53rd Street and Sixth Avenue in Manhattan, New York. On any given day, crowds of tourists and native New Yorkers line up - sometimes for hours - for a $7 meal of chicken, beef, or both, served with yellow rice and a three-ingredient salad, all wrapped in a gyro or served on a round aluminum dish.

In 2007, a New York journalist credited The Halal Guys with reinventing the street-food scene. Hot dogs were just for tourists as true New Yorkers craved something more. When the three founders, all Egyptian immigrants, started serving from their then-no-name pushcart, they were largely targeting Muslim taxi drivers who were looking for inexpensive and convenient food.

But they soon found legions of fans among tourists, Manhattan workers and clubbers getting out at 2 a.m. Executives said this weekend that about 95 percent of the company’s current customers worldwide aren’t Muslim. In Itaewon, the crowd was widely international.

There are thousands of eateries in New York. What makes The Halal Guys stand out from all the others in New York is their white sauce. There’s also the almost equally legendary hot sauce, which makes gochujang (Korean red pepper paste) seem tame.

When the fast-casual company decided to franchise globally a couple of years ago, Lin Hwang, a Korean-American from New York who had experience in the food business, jumped at the chance. After all, he ate at the cart three times a week. Hwang, now the COO and executive director, called on his college buddy Yong Yi Shin, who was already working here for UBS Korea to serve as CEO.

The Korea brick-and-mortar location has a familiar look. The meat and sauce, too, taste the same, as franchisees are required to use the same ingredients as the flagship. Staff in Itaewon trained for four weeks in New York before the opening.

Manila was The Halal Guys’ first international location, and the founders are planning 50 in Southern California as the company seeks wider global growth on the level of Chipotle or Shake Shack.

On Saturday, Lee Hye-young waited for 30 minutes outside Saturday to buy a chicken and gyro combo. The Seoul attorney had never been to New York nor tried The Halal Guys.

Although there are few Muslims in Korea, halal, which is Arabic for permissible, isn’t new to Seoul or Itaewon. Since it’s food that adheres to Islamic law, it’s also seen as healthy and is attracting growing numbers of people of all faiths. In 2015, the Korea Tourism Organization even published an online “Restaurant Guide for Muslim Visitors.”

Hwang said The Halal Guys stands out because of their prices and fast-casual concept. The New York cart is hugely popular with Korean visitors to New York, he said.

Directly across the street, Pasha, a small halal restaurant which opened in Itaewon in 2001, was empty on Saturday save for two workers, while things were booming at The Halal Guys. Business was also slow at Pervan on the same strip.

Axmad Osama, a Muslim from Egypt who moved to Korea from Istanbul this year, lined up at noon for a 30-minute wait. He and his wife, Chelsey Dean, an American, saw the opening announcement on Facebook, where more than 1,100 people indicated they were “interested” in visiting on opening weekend.

The couple said the food was similar to what they’d had in Istanbul and were intrigued. “The name is also catchy,” Osama said.

U.S. franchises are increasingly making their way into Korea. Shake Shack, a New York burger franchise opened to a crowd of 1,000 in July.

On Saturday, the burger chain launched its second location in Korea, in Gangnam District’s Cheongdam-dong neighborhood in southern Seoul, after meteoric success, according to SPC Group, the franchise’s local operator. SPC Group said it is looking to open a third Shake Shack in northern Seoul, with plans for 25 branches in Korea by 2025.