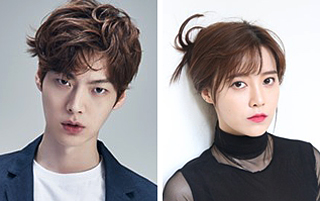 The show, set to air on tvN, will document the lives of the newly married celebrity couple. The program was touted as offering the lives of a real newlywed couple, rather than similar shows that feature make-believe marriage, such as MBC’s “We Got Married.”

Producers said they expect popular response from younger viewers and couples that dream of marriage, as the new show will not hold back in showing the lovey-dovey lives of the newlyweds.

Additionally, this would be the first time that the two are cast in the same show since their wedding, which took place on May 21. The two actors previously starred together in the KBS2 medical drama “Blood,” which aired last year, and were confirmed to be dating in March.

Relatedly, Ahn completed filming for the third season of producer Na’s other tvN variety show, “New Journey to the West,” which will air its first episode on Jan. 8. His wife is holding her latest month-long art exhibition “dark YELLOW” at the Seoul Arts Center from Jan. 5.

The first episode starring the couple will air on Feb. 3.