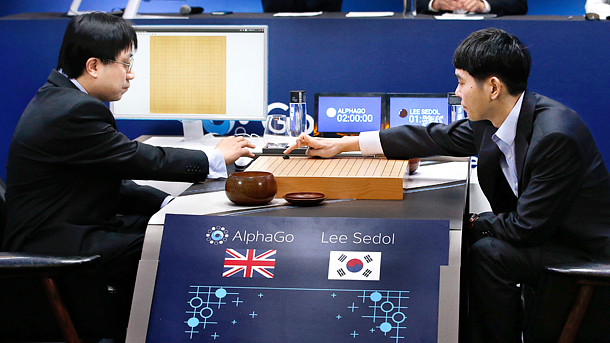 After becoming the first professional champion to lose in the ancient brain game to a machine in the historic match against Google’s artificial intelligence AlphaGo in March last year, Korea’s top-ranking Go player Lee Se-dol assured Go aficionados that it was just him that had lost, not the human race. As the year progressed, other champions have one by one been humbled.

Top players from Korea, China and Japan, including current world champion Ke Jie, all challenged the computer program, and by Jan. 4, the scoreboard was 60 wins and zero losses for the computer. By the end of December, it claimed “I am the master.” Except for one tie after the 52nd contestant went offline, no contestants took a win against AlphaGo. One contender was 29-year-old 9-dan Kim Ji-seok from Korea famous for his aggressive play despite his boyish looks. He had to give up in just 170 moves.

I asked what it had been like. “Frankly, I don’t think I can ever win against it. It (AlphaGo) will get only stronger.“

“What makes it so strong?”

“Even for the masters, the inner center is a realm of the clouds, murky and unfathomable. AlphaGo is so accurate in its learning ability that it can overwhelm the opponent even in the central stage as well as the corners. In just seven to eight seconds, it comes up with the outpacing moves.”

“Would humans have a better chance if the game was not fast-paced?”

“No way, I’ve studied all the matches. AlphaGo was consistently unwavering and confident every time.”

Many of the defeated champions observed that the program has advanced enough to give top human professionals a two-stone handicap. Legendary Japanese player Shuko Fujisawa claimed that he could challenge the God of the game only if given a three-stone handicap.

AlphaGo, backed by its power of an infinite number of algorithms, is capable of learning by itself without any programming, and mastered top players’ gaming strategies to evolve and become smarter after every game.

Its perfect algorithms have overwhelmed human intuition and creativity. Some even declare the history of Go game as BC (Before Computer) and AD (After DeepMind). (DeepMind is the creator of AlphGo).

AI shock should be the much-needed wake-up call to shake our society out of lethargy. In deep-learning computer, we are even behind China. Korea’s AI technology is said to have reached about 75 percent of the U.S. levels. Against China, it is on par, if not slightly lagging.

Kim Ji-seok saw the bright side. “Mathematicians were startled when calculators and computers came out. But since then, the science of math and statistics has expanded.”

“It is true that human professional players will lose much of their presence, but the realm of Go can expand through the introductions of machine players,” he said.

Some players already fret they could lose income and their rankings to smart AI computer programs. But at the same time, the surge of AI players has drawn interest in the game of Go beyond Asia, said Ajou University professor Kam Dong-gun. Chess became popular around the world after IBM’s super computer Deep Blue beat Russian world chess champion in 1997.

The upsurge of AI brings both fear and anticipation. The AlphaGo shockwave came hard on Koreans because there are about 7 million Go lovers in the country. Korean professional players joined up to form a task force to develop and field a Korean version of AlphaGo.

Our place in the fourth industrial revolution could be shaped by the way the Go community finds common ground with computer intelligence.