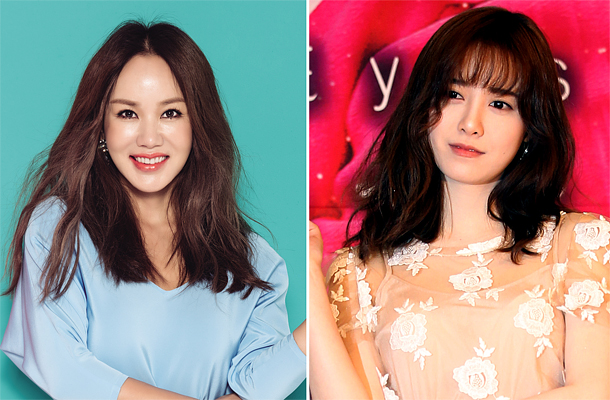 Actresses Ku Hye-sun and Uhm Jung-hwa have been confirmed in an unexpected casting of the upcoming MBC drama “You Are Too Much.”

The two stars are returning to television to take on the lead roles of the 50-episode production. The drama will be about the relationship between the superstar singer Yu Ji-na (played by Uhm), who faces inner turmoil due to the constant guilt of what she abandoned for her success, and her impersonator Jeong Hae-dang (played by Ku), who tries to be her family’s breadwinner by performing as Yu Jwi-na after her father loses his job.

A spokesperson from MBC said, “We are looking forward to the synergy provided by Uhm and Ku.”

Uhm is known for both her successful singing and acting careers, and is hot off the release of her latest record “The Cloud Dream of the Nine,” which was released last month. She previously starred in tvN drama “Witch’s Romance” in 2014.

Her co-star Ku is also known as a multi-talented actress. She is currently in the midst of her month-long art exhibition “dark YELLOW,” which is being held at the Seoul Arts Center until Jan. 29.