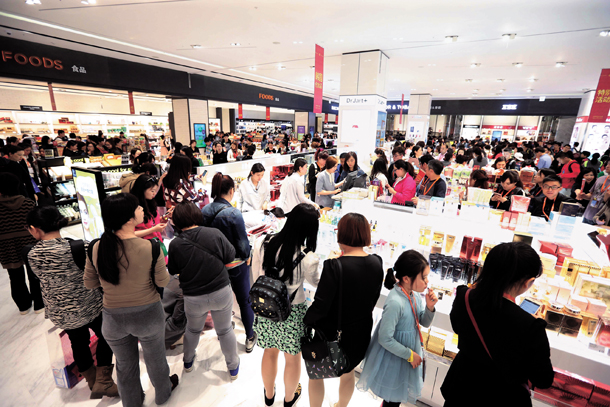 The duty-free shop at Shinsegae Centum City Department Store in Busan is packed with Chinese tourists purchasing Korean cosmetics in this file photo from April 9, 2016. In less than a year, China’s quarantine authority restricted 19 cosmetics products from entering the country, citing their failure to satisfy its import guidelines. [YONHAP]

Sour political relations between Korea and China over deployment of a U.S. missile defense system could deal a massive blow to one of the nation’s most lucrative exports: cosmetics.

China’s quarantine authority published a list last week of cosmetics that failed to satisfy the country’s import guidelines. Among the 28 products listed, 19 are made by Korean companies. That translates to roughly 11 tons of Korean-made cosmetics that might have to be spent back to Korea.

The list was based on quality inspections conducted by the Chinese government in November. They include a range of popular products made by Korean companies including creams, essences, cleansers and even toothpaste.

IASO’s lotion, revitalizing facial pack, essence and cleansing products were disqualified by Chinese authorities because there was no certificate proving the cosmetics products could be used before their expiration date. 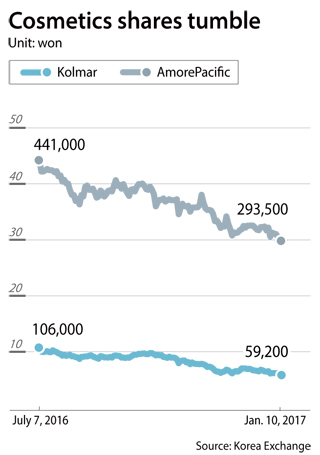 Kocostar’s sheet masks were axed because the registered product and actual product did not match. Others on the list failed to gain approval due to issues with product components.

Aekyung had a body wash on the list that was sold only to Chinese consumers. A spokesperson said the company had since made adjustments to the product to meet Chinese standards after the inspection in November.

“There are concerns this is part of a retaliation from China due to Korea’s deployment of Thaad [the controversial missile defense system], but we do not agree,” the spokesperson said. “China has actually tightened its quality guidelines every year apart from political issues.”

After the Korean government decided to install the United States’ Thaad missile defense system in July, China imposed more stringent regulations on travel packages to Korea and restricted the flow of Korean entertainment into the country. “China has delivered verbal instructions in the country to cut travelers to Korea by 20 percent as a form of retaliation against Korea” said Kim Hye-mi, an analyst at Baro Investment & Securities. “Subsequent bans on Korean media content and restrictions of Korean celebrity appearances on Chinese shows have pulled down investor sentiment on Korean cosmetics as well.”

On July 8, right after Korea confirmed plans to install Thaad, the stock market started reflecting tensions between Korea and China. The stock price of the nation’s largest cosmetics company, AmorePacific, fell to 293,500 won ($245) from 441,000 won. Shares of rival Kolmar Korea fell to 59,200 won from 106,000 won.

“Political risks visible in the market, through issues such as the Chinese government rejecting Korean airlines’ plans to operate chartered flights to China, continue to burden shares of Korea’s cosmetics players,” said Yang Ji-hye, a research fellow at Meritz Securities.