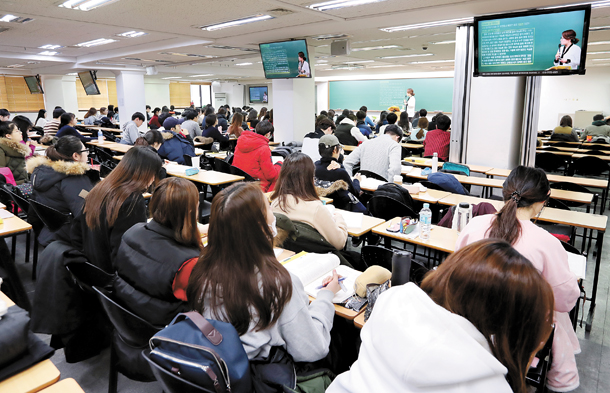 According to the Ministry of the Interior, the number of those aged younger than 19 who passed the level-nine civil service exam for employment in local government has been growing over the years.

The high school graduates who passed the civil service exam accounted for 0.03 percent of the total number who passed the exam in 2011. The number jumped to 0.1 percent in 2015.

“At least three out of 10 people signing up for consultations on the civil service exam at my cram school are high school seniors,” said Park Jung-hyuk, consulting director at a cram school in Noryangjin, southwestern Seoul, a region packed with cram schools, cheap cafeterias and one-room apartments all catering to civil service exam candidates.

A 19-year-old surnamed Kim, sitting among 150 students in a class at the cram school, is one of them.

“I tested lower than I expected in the College Scholastic Ability Test,” Kim said. “I can spend another year studying for it, but what difference will it make if I make it into a university?”

“Because after my years at a university, I will have to begin the whole process of looking for jobs, which everyone knows is not easy,” he added. “Instead of that, I chose to study for the civil service exam earlier on in my life.”

“You see, the reason why we’re trying to send our kids to good universities is to increase their employment prospects,” said the mother of another high school senior as they waited in line to consult Park. “Civil service is a top-notch job and I am proud of my son for trying to become one instead of trying another year for the CSAT.”

And more are opting to take the civil service exam even though they have won a spot in a university.

“I have been admitted to a well-to-do university in Seoul,” said a 19-year-old surnamed Oh, also waiting in line. “Your future is still so bleak while in college. I would rather find a stable job as soon as possible.”

Many high school graduates, having a good handle on sociology, math and science thanks to their high school education, could thus opt to take the exam out of school.

Cram schools for the civil service exam are also responding to the spike in the number of younger test-takers. Since 2014, Park’s cram school in Noryangjin has been running a special class comprised only of high school seniors. The class runs from 6 a.m. to 11 p.m. every day, and teachers even text and call parents when kids miss a class.

“I was relieved to find such a system at the cram school,” said a 50-year-old surnamed Park, “as my child is still young and needs a system like this to make sure he stays on track.”

“The exam allows anyone of any background to become a civil servant,” said Kim Gi-joong, an official of the Ministry of Personnel Management. “This will help reduce the gap between people of different financial and social backgrounds.”

But some experts advised the younger challengers to carefully consider what they may be getting into.

“It is difficult to test into the civil service unless your English skills are in the first and second levels of the CSAT,” said a lecturer of a cram school in Noryangjin. “Do not think that the civil service exam will be easier than the CSAT.”

“Some assignments of a level-nine civil servant are not for any high school student who has just graduated,” said Min Kee, a professor of public administration at Jeju National University. “A civil servant’s job is not that simple.”