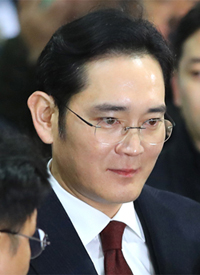 An independent counsel asked a local court on Monday to issue a warrant to detain Lee Jae-yong, the third-generation leader of Samsung Group, on charges of offering bribes to a longtime friend of President Park Geun-hye in return for the president’s influence to support a controversial merger at the country’s largest conglomerate.

Lee, vice chairman of Samsung Electronics, is a suspect in an alleged bribery scheme involving Park and her friend Choi Soon-sil. He was questioned by the team working for Independent Counsel Park Young-soo for 22 hours last week over allegations that Park put pressure on the state-run National Pension Service to support a merger of two Samsung units in 2015 in return for the conglomerate’s generous support of Choi and her family and donations to two foundations controlled by Choi.

The $8 billion merger between Samsung C&T and Cheil Industries in July 2015 played a key role in the third-generation transfer of control of Samsung by solidifying Lee’s grip on Samsung Electronics.

The scandal involving Park, Choi and some of Korea’s top conglomerates, which led to the impeachment of the president, was first investigated by the prosecution last year. Independent Counsel Park Young-soo launched a new probe. Park, impeached on Dec. 9, 2016, has immunity from criminal charges as long as she remains in office.

The independent counsel sought a detention warrant to hold Lee on charges of giving bribes, embezzlement and perjury at a National Assembly hearing investigating the same scandal. “Although the impact on the national economy will be significant, we believed that upholding justice is more important when we decided to seek the detention warrant,” Assistant Independent Counsel Lee Kyu-chul said Monday.

The independent counsel team will now go after President Park on charges of receiving bribes, he said.

“Profit-sharing between the president and Choi was proven through various records,” said Assistant Independent Counsel Lee. “We obtained objective physical evidence to prove their conspiracy.”

He also said his team will conduct further investigations and then question the president.

The 48-year-old de facto CEO of Samsung was accused of having paid and promised to pay a total of 43 billion won ($36.4 million) in bribes using Samsung’s money. Because the money given to Choi and her family were corporate funds of Samsung Electronics and Cheil Worldwide, the investigation team accused Lee of embezzlement.

The independent counsel said Lee perjured during a National Assembly hearing in December over the Choi-Park scandal. Lee testified that he did not know who Choi was and that Samsung never made any donations in return for favors. The independent counsel, however, said Samsung and Lee knew about Choi’s influence over the president when the conglomerate decided to chair the Korean Equestrian Association in March 2015. Choi’s daughter, Chung Yoo-ra, is an equestrian athlete, and Samsung was her financial patron.

The Seoul Central District Court will hold a warrant hearing for Lee on Wednesday.

Samsung Group issued a statement on Monday to object to the independent counsel’s plan to take its leader into custody.

“It is difficult to agree with the special prosecutor’s decision, because Samsung did not make contributions in order to receive favors,” it said. “In particular, we find it hard to accept the special prosecutor's argument that Samsung has made improper requests related to the merger of Samsung affiliates or the leadership transition. We believe the court will make the appropriate judgment on this matter.”

A Samsung official said the company will be stigmatized among global investors, and the damage it will suffer in the international market will be unimaginably high.

The independent counsel also made its first indictment on Monday of Moon Hyung-pyo, former health and welfare minister, over the controversial Samsung merger. Moon was accused of abusing his power as minister to pressure the National Pension Service to support the merger.

According to the independent counsel team, Moon received President Park’s orders at the end of June 2015 to “take good care of the Samsung merger” through Blue House aides. After receiving the orders, Moon commanded public servants in his ministry to influence the state fund to support the deal.

Although advisory firms in Korea and abroad recommended the National Pension Service to vote against the merger, it supported the deal, fueling suspicions of undue influence over the decision. The pension fund, Korea’s largest institutional investor, was the largest shareholder of Samsung C&T at the time.