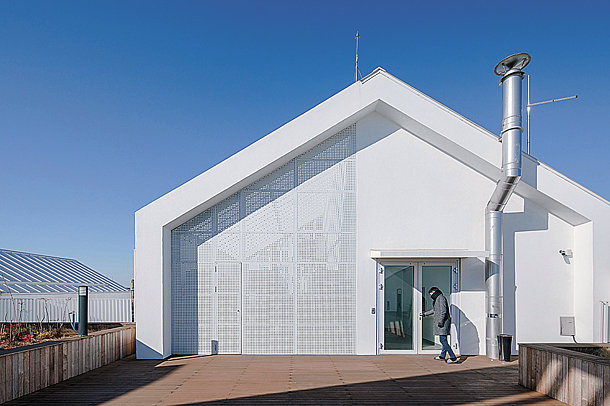 Injain Care Center’s triangular gable roof was designed to depict small houses in a bunch. The rooftop garden functions as the resident’s resting area and a vegetable garden. [NARSILION PHOTOGRAPHY]

Korea is rapidly becoming a superaged society. By 2026, it is expected that one out of five people in Korea will be over the age of 65. It’s even difficult to call those above 65 years of age elderly as many Koreans now live well over 90. Policies on aging population are urgently being drawn up. Then a realistic curiosity arises. Where will all the senior citizens live in the future?

There are numerous so-called silver towns sprouting up across the country. But decent housing facilities cost a bundle. What kind of space would be best for the elderly in Korea that keeps aging? That was the question that agonized two architects - Jang Yoon-gyoo 53, and Shin Chang-hoon, 47, of Unsangdong Architect Cooperation - for years. Then they came up with an answer of their own and constructed a care facility for elderly called “Injain Care Center” in Bucheon, Gyeonggi. The request of creating a new model for Korea’s care facilities for the elderly came from Joo Won-suk, 59, the president of media company Media Will that’s known for creating job sites like Byeorook Sijang, Alba Heaven and others. He asked the two architects to come up with a real home-like facility rather than one that resembles a prison. 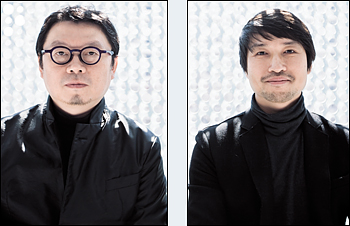 The Injain Care Center is located in the corner of a park in Goean-dong in Bucheon. Geographically, it’s in Gyeonggi, but it is a neighborhood right beside Hang-dong of Guro District in Seoul. The center, which is five stories high, stands out among other concrete buildings in the area, due to its unique European design. Since care centers across the globe are under great pressure to reduce costs to accommodate citizens, it would’ve been more efficient to construct a large rectangular building on this large plot measuring 1,367 square meters in size. But the architects decided to erect a jagged building with gable roofs on top. The architects explained that such sensual exterior design was not created for looks, but rather to create a home-like interior for the elderly. According to the architects, the Injain Care Center is one of few care facilities in Korea that have adopted the so-called “Unit Care system.”

The system regards one unit as a house. Instead of locating rooms along a long corridor like a hospital, it’s built to have one unit that resembles a common house with bedrooms and a living room. There’s one care taker per unit who looks after the elderly people residing in the unit. This system, according to the architects, is common in Japan.

There are four units on each floor from the second to the fourth. On the fifth floor, there are three units. In the middle of this gable-roofed building complex, there’s a 94-square-meter multi-purpose hall. The entrances to the units are located at the four corners of this hall, making a corridor unnecessary in this type of design.

In one unit, there are five bedrooms, a living room and a bathroom.

“To have windows in every room that’s not in a corridor style, we had no choice but to have uneven outer walls, creating many hollow spaces that can be seen as a waste” said Jang. “By using all the spaces available, we could fit more than 240 beds, but the building owner Joo wanted a spacious area with only about 180 beds so we designed it accordingly.”

“Bucheon is my hometown,” said Joo from Media Will. “That’s why I started the Byeorook Sijang and even establishing a company thanks to its massive popularity there.”

He decided to build a care center for elderly in Bucheon, to “give back” to the neighborhood Joo says he owes.

“There are so many care facilities that are poorly constructed in a bad environment,” he said. “Such centers end up being the final homes for the elderly so I wanted to create a center where they can live with dignity - a home-like center rather than a place that makes you feel like you’ve been locked away.”

“I really liked the beautiful design,” Joo explained why he decided to work with the two architects.

Joo didn’t ask much from the architects. He had two requests: one was to adopt the “Unit Care system” that was popular in Japan and the other to only have 180 beds. Right away, the two architects delved into researching about care facilities for elderly. Unsangdong designed many stylish buildings throughout Korea including Gallery The Hill in Seoul and Paju Kintergarten in Gyeonggi. But it was its first attempt at a care facility. While they were studying about care facilities in Europe, the architects came across the name of a welfare policy for the aged, “Aging in Place.” They were instantly charmed by the Aging in Place policy, which is a philosophy of helping elderly “grow older without having to move.”

“I realized that the reason why so many senior citizens in Loppukiri, a housing community for mid-life and elderly people in urban surroundings in Finland’s Helsinki, are happy is because they are still living among their familiar places and people,” said Shin, explaining where his idea came from. “It makes them stay happy which affects their health and well-being as well.”

According to Jang, it was crucial for them to “design the interior like an ordinary home while coming up with a polished exterior so the elderly feel like they just moved homes to a fancier place.”

Left: An exterior view of the Injain Care Center in Bucheon, Gyeonggi. Center: The care center adopted the so-called Unit Care system. Instead of having a long corridor like traditional hospitals or care facilities, Injain Care Center has a large hall in the center and about four units on each corner. Above right: One unit can be shared by about 12 senior citizens. They come out to the living room area during meal times. Bottom right: A room is shared by two people.

A park view and trot music

On the morning of Jan. 4, the view from a living room of a unit at Injain Care Center on the fifth floor seemed very ordinary. Six grandmothers were mingling in the area, sharing couches and sofas. They were watching a singing program on television in which a singer was singing their favorite music genre, trot (an old style of music that’s especially loved by the older generation). Each room has a wide window that looks out over a park. Among the five rooms in this unit, only one is shared by four people and the rest are shared between two. A total of 12 senior citizens were sharing the unit.

When it was time for lunch, 11 of them came out to the living room to eat.

“At other care centers that are not as spacious as ours, the elderly eat, sleep and watch TV in their tiny cubicle room,” said Cho Dong-jae, director of the center. “They hardly come out from their rooms. But here, they live like they are in their ordinary homes, just with more friends.”

The average age of the elderly who reside in the center is 84. Nearly 70 percent of the residents are female. It opened in November 2015, and last May, it became a full house.

“There are nearly 200 people on a waiting list,” said Joo.

Such a spacious and home-like facility sounds expensive, but an individual who shares a room with three others pays 600,000 won ($510) per month.

“The cheapest facility at the moment is priced around 500,000 won per month to share a four-person bedroom. For more luxury facilities operated by a conglomerate, it can cost up to 7 million won [a month] per person,” said Cho, emphasizing that Injain Care Center has appropriate pricing.

Pointing out that polarization exists even at care centers for the elderly, Joo complained that “society pays little attention to such facilities, where many of them would end up.”

“Discussions on what kind of services and spaces are needed for the elderly need to take place, but society seems to just toss senior citizens into a care center and try to forget about them,” he added.

The two architects said they tried very hard to make a better environment for the senior citizens who have difficulty moving around and may use wheelchairs. Doors without thresholds, bathrooms with safety bars and an outdoor garden to grow vegetables, according to the architects, were a must. There is also a sauna and foot bath equipment housed in a physical therapy room on the basement floor.

“We have all the basics similarly [found at] other care facilities for the elderly,” said Cho. “But what we prioritize and try to focus on is providing heartwarming services and care. The way caregivers look at the elderly and the way they talk to them - that whole attitude is the most important of any of the programs in the center.”