‘Your Name’ is also a crowdfunding hit

‘Your Name’ is also a crowdfunding hit 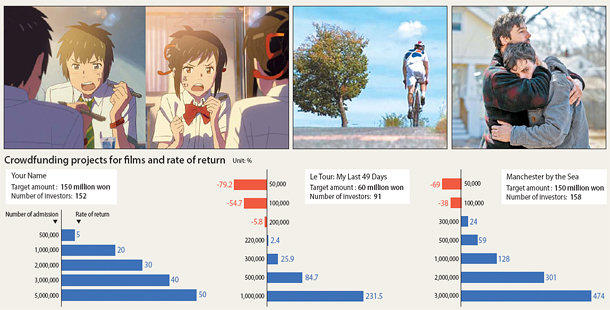 “Your Name,” a Japanese animated film directed by Makoto Shinkai, has sold more than 3.05 million tickets as of Sunday, to become the highest-selling Japanese anime in Korea. It even toppled the record set by Hayao Miyazaki’s “Howl’s Moving Castle” in 2004, which had 3.01 million viewers.

While the rare success of Japanese animation is welcoming news to anime enthusiasts in Korea, the main beneficiaries have turned out to be those who invested in the movie through a project launched by crowdfunding start-up Wadiz. Those who bet on the movie got to enjoy a 40 percent rate of return. After all, they have just successfully invested in the first foreign movie to attract investments through crowdfunding.

One of the factors that minimized the risk and stabilized investors’ sentiment was that the movie had already seen success in other markets including Japan, Taiwan and China. While funding for movies is normally completed before they are filmed to finance their production, the crowdfunding project by Media Castle was intended to raise money for distribution and marketing.

“We were confident about the movie before launching the project,” said Kang Sang-wook, a director at Media Castle. “We also had expectations that investors who commit to the project, no matter how little the amount, might advertise the movie enthusiastically and help it go viral.”

To relieve potential investors of the burden of principal loss, Media Castle issued corporate bonds, which allow holders to recover some of their principal in case of a default. “We didn’t want to disappoint those who had faith in this movie,” Kang said. “The reason we set our initial investment target at 50 million won was to minimize the burden on us in case the movie suffered losses.” Another element that attracted investors was the highly estimated yield despite the investment limit set at 2 million won.

Today marks exactly one year since investment crowdfunding was legalized in Korea.

The Financial Investment Services and Capital Markets Act, passed last year, was aimed at supporting start-ups to boost the economy and create jobs for young people. It also enabled start-ups to raise capital through crowdfunding, which also created opportunities for individuals to invest in these companies.

It took some trial and error until investment crowdfunding for films gained its ground. “Pandora,” a Korean disaster film, entered the spotlight after it met the limit of 700 million won set on the investment channel. However, since it premiered in December, it only brought in 4.75 million won in ticket sales, barely hitting the break-even point of 4.4 million won.

“The concept of crowdfunding is rather unfamiliar for Korean investors,” said Kim Eun-jeong, a director of communications at IBK Securities. “But if it goes with entertainment and cultural content that people are familiar with, producers can cover the production cost while securities companies can raise awareness of the new investment products. It’s a win-win situation.”