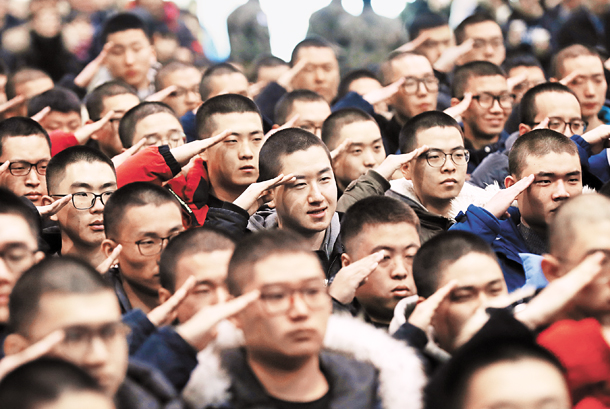 A batch of new military recruits salute their family members on Jan. 16 in Incheon before entering training camp. [YONHAP]

Mr. Oh, a 24-year-old college student, wanted to serve his mandatory military service sometime between January and March of 2013. Aware that he would have to return to school upon his completion of duty, he wanted to hit the books straight away, making no time for staying idle.

In Korea’s current draft system, Oh needed to be wise about which month he starts and ends his service. In the best-case scenario, he could return to school right after getting discharged from the military. In the worst-case scenario, he would have to wait for an entire semester.

In the end, it didn’t work out for Oh. The competition was high. Way too many men had the same thoughts as him and the lucky-draw didn’t play out to his advantage.

Oh eventually began in June 2013, one of the least-expected - and most unpopular - month of the entire year.

He was discharged in March 2015, after the spring semester began.

Korean men aged 18 or older are obligated to serve in the military, with the army requiring 21 months of service, the navy 23 months and the air force 24 months. Most of them being college students, the most coveted months - December through March - often require a lot of luck.

“I was able to succeed on my second try,” says Song Chi-eun, 19, a nursing student at KC University in Seoul, who will be drafted next month. “I was so desperate. It felt like I was applying for college.”

Kim Kyung-soo, 19, another nursing student at KC University, will also start next month.

“I failed twice before finally getting accepted,” said Kim. “I was really lucky.” Kim explained that he wanted to serve his military duty right after finishing his freshman year because when he returns to school, he will have to study his major courses in-depth, which generally are a lot harder than his first year courses.

“Since last October, I kept a keen eye for any vacancies for enrollment,” says Kim, who will be working at a general outpost. “Two people applied for every spot available for my position, which I think is another reason I got accepted, because the competition rate wasn’t as high as other places.”

According to a news article that ran in the Financial Times on Sept. 12, 2016, Rep. Kim Hack-yong, then a lawmaker in the ruling Saenuri Party and a member of the parliamentary National Defense Committee, said that 50,198 Korean men that year were denied at least twice to get drafted in the months they chose, up by nearly six-fold from the 8,481 men that were so in 2012.

The lawmaker, who is now an independent unaffiliated with any political party, referenced data from the Military Manpower Administration.

Whether the government will undertake any measures to address the issue and the problems it is causing Korean men remains to be seen.