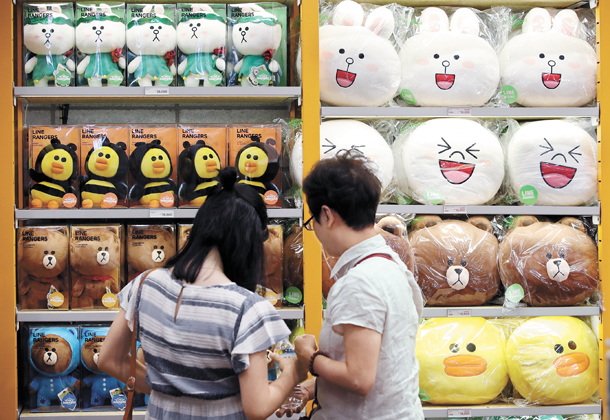 The achievement owed a lot to continuous growth in advertising and overseas sales including the success of its messenger app affiliate Line, which successfully listed on the New York and Tokyo stock exchanges last year.

The company also reaffirmed an earlier announcement Thursday that it would double its investment to 500 billion won in the next five years to develop new revenue sources, including artificial intelligence (AI) based robotics and autonomous vehicles. Shift away from a heavy dependency on advertising has become Naver’s biggest challenge.

Revenue from overseas - including from Tokyo-based Line - grew 31.8 percent, faster than revenue from the domestic market, which grew 19.5 percent.

The record-breaking performance was largely due to advertising, which accounted for 74 percent of total revenue at 2.97 trillion won. This was up 27.8 percent from a year earlier, which is also faster than the 9 percent increase in revenue made from content sales, 924.9 billion won. Content sales include news services, videos and Web-based TV shows and Web-based cartoons.

In a conference call, the company said it expects advertising to increase more than 10 percent this year.

Naver is facing challenges in advertising as Google, which only had a market share of 6 percent in the IT advertisement market, expanded sharply last year to threaten the Korean Web portal’s dominance. In the last decade Naver dominated the search engine market with 80 percent market share. But according to Search Monitor, Naver’s market share among search engines has dropped to 50 percent whereas Google’s has surged to 37 percent largely on the wide use of smartphones that runs on the Android operating system. This is expected to affect the company’s advertisement revenue.

In fact, even the performance of its app messenger affiliate Line, which reported a turnaround from red to black in two years, was below market expectations as the company also heavily rely on revenues from advertising.

According to Line, which announced its results on Wednesday, the posted annual revenue for 2016 was 140.7 billion yen, which was a 17 percent increase from the previous year and an all-time record.

However, while other businesses, including “stickers,” which are cartoons used in messenger apps while chatting, and games were up, they didn’t grow as fast as advertising revenues.

“The fundamental deceleration of revenue growth is concerning,” said Jung Ho-yoon, a Eugene Securities analyst. “We expect the sticker and game revenue, which accounts for 46 percent, to show slow growth throughout 2017 and Line will have difficulties in increasing its revenue only through advertisement.”

The analyst added that although it is positive that Line will continue to launch new services and expand its presence in Southeast Asia, it is still too early for those businesses to generate profits.

Other analysts have shared similar concerns. In fact Morgan Stanley downgraded the company’s rating from “overweight” to “equal weight” on Wednesday, which means analysts are recommending investors to hold the stock. An overweight rating is a recommendation to buy as its value is expected to rise.

Line made history last year when it became the biggest tech IPO to be listed back-to-back on the New York and Tokyo stock exchanges.

In hopes of securing new revenue, Naver reaffirmed an announcement made in November that it will invest 500 billion won through 2022 in new revenue sources as part of its efforts from shifting from a Web-based company to a technology platform provider like global rival Google.

That planned investment is twice the size of the 200 billion won the company has made in the last five years.

“Naver has made the biggest investments on research and development among internet companies in Korea,” said Park Sang-jin, Naver’s chief financial officer, in a conference call on Thursday. “Since last year, we have been focusing on transforming into a technology platform company and we will continue to invest so that we can lead the market.”

The CFO said Naver is currently working on a joint project with Line called J, which is an AI-based virtual secretary catering to owners’ needs anytime and anywhere.

The first AI secretary service in the form of a smart speaker is supposed to launch in the first half of this year.

This year will be especially significant for the incoming CEO of Naver, Han Seong-sook, who is not only the first female CEO of the Web giant but also the first non-engineer to lead the company.

Han, who joined Naver in 2007 from rival search engine company Cityscape, will be taking up her role in March.

During a conference call on Wednesday, the CEO nominee said Naver will increase its efforts on content development including Naver TV, which will offer customers access to various high-quality videos on both personal computers and mobile apps including Web dramas and entertainment shows, games and children-related services.

“By changing into a technology platform, we will continue to increase our support for small and midsize businesses and creators while seeking expansion in the global market,” Han said.