At home in a creative village: In Busan, artists find inspiration in unique live-in workshops

At home in a creative village: In Busan, artists find inspiration in unique live-in workshops 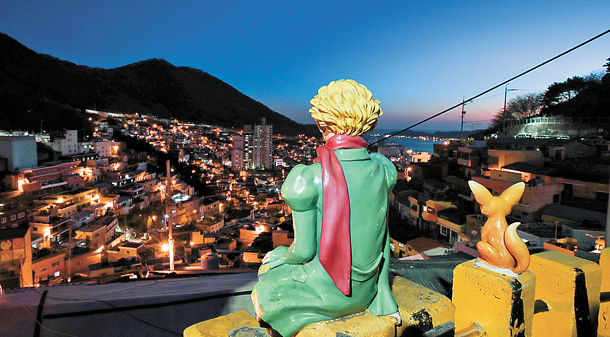 “Young Prince and the Desert Fox” is one of many art works on display at the colorful Gamcheon Culture Village in Busan. [LIM HYUN-DONG]

The town now known as Gamcheon Culture Village located in Saha District, Busan, used to be a haven for refugees who fled from the Korean War, and was more or less just a poor hillside village. The area was formerly referred to as the Taegeukdo Village before a major renovation in 2009, and was known for its dull and gloomy atmosphere due in part to the high number of abandoned houses.

In order for the village to be reborn as a cultural hub, the Saha District received funding from various government offices for the purpose of urban regeneration. After painting its walls with a fresh coat of paint and placing works of arts throughout the area, the village was given its new name. The renovation efforts reached their peak with the success of the “Empty House Residency Preservation Project.” The district offices contacted famous architects such as Seung Hyo-sang, Jo Seong-ryong, Kim In-cheol and Francisco Sanin among others to enlist their help in converting the abandoned structures into workshops for artists.

In November 2015, artists entered their new workshops and began creating. Today, the work of the artists are up for display as an art gallery that tourists and villagers can visit for free.

The village that used to hold memories of hardship has shed its former identity and has been reborn as Busan’s most colorful and artistic spot.

1. The roof of the “Tower of Doknak” is shaped like a tetrahedron. 2. The “Public Room” designed by Francisco Sanin is located at the top of a staircase.

Two of the most eye-catching attractions in the village are the “Tower of Doknak” and “Saekjeuksigong,” which were designed by architects Seung Hyo-sang and Kim In-cheol. The two constructed the designs with the theme of an inviting open yard in mind as a place for residents to mingle and relax.

The Tower of Doknak which stands near the entrance of the village is a very popular attraction with a constant crowd of visitors. Since the structure was created using two existing houses, the shape of the tower changes depending on which angle it is viewed from. When looking at it from the main road, it appears to be just a simple two-story construction, but looking at it from behind at a lower viewpoint reveals a staircase connecting the tower to the below building.

Located in front of the tower is an open yard that used to be the lower building’s rooftop.

“Because the village is located at the foot of a mountain, it would have been difficult to find an open area for public use,” said Seung. “Thus, we flattened the rooftop and connected it to the main road to emphasize its accessibility.”

The results of Seung’s efforts have made it so that the tower has become one of the village’s standout landmarks.

3. The open yard in front of the “Saekjeuksigong.” 4. The main road leading into the village is where the “Tower of Doknak” is located. 5. A gallery designed by the architect Kim In-cheol. [LIM HYUN-DONG]

The village’s other attraction, the Saekjeuksigong, is placed at the highest point of the village. Past the Haneul Maru Observatory and up a separate road that leads to a long staircase, visitors will be able the find the building. This place is also a former house which was renovated into a workshop for artists to use for up to a year. Currently, it is occupied by the Armenian painter and writer Tigran Akopyan and his wife Choi Hye-jeong, a museum planner, who moved in last November.

“The Gamcheon Culture Village was similar to my ideal utopia,” said Akopyan, who settled down in Busan with his wife four years ago. “I’m currently working on some pieces inspired by my time in the village.”

Saekjeuksigong is shaped like a sideways milk carton. Seventy percent of the space is reserved as a gallery while the remainder is used by the artist as their living quarters. The formerly flat rooftop was remodeled into a pointy one, and sunlight fills the rooms, which gives the illusion of a bigger space despite it actually being somewhat small.

Like the Tower of Doknak, next to Saekjeuksigong is an open yard that was designed by Kim In-cheol, its architect.

If the previously mentioned attractions represent the more outdoor and extroverted side of the village, then the opposites would be the “Public Room” and “Star Stairs House.” Rather than being easily seen or accessible, these attractions are hidden deep within the village. Visitors must seek out these places on foot as they cannot be reached by car. 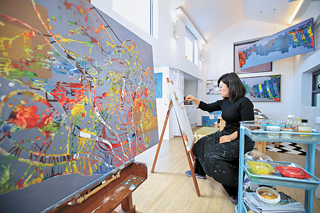 Coming out of the Tower of Doknak and past the “Young Prince and Desert Fox” sculpture, visitors must walk down 20 to 30 meters (65 to 98 feet) of steps to find the Public Room.

Designed by American architect Francisco Sanin, the location of the building was selected by Sanin due both to its reclusion as well as its availability. Looking at the building from the ground floor gives a view of its large glass window, which remains open during warmer weather. Residents prefer using this window as the entrance into the gallery rather than using the main entrance.

“This is a magical house that provides a completely different scenery depending on where you look,” said writer Na In-ju, who currently occupies the house. “You can see the tranquil picture-like village from the terrace, or even the passing of people from the glass window which reflects an image like a video.”

The Star Stairs House designed by architect Jo Seong-ryong is in the most remote location of the residencies in the village.

“The stairway next to the house is called the ‘Stairs That Lead to the Stars,’” said Jeong Seung-gyo, an official of the Saha district office. “The stairway is so steep that you can get dizzy enough to see stars while climbing, which is why it is called as such.”

Different from the previous houses which combined the artist’s workspace and living quarters, this house separates the two. This house also has many windows.

“With time, even the reflective windows themselves change,” said writer and current resident Kim Ryang-gyeong. “The light is so strong that the art on display actually changes its colors.”

Commenting on the scenes seen from the windows, Kim said, “This house is very mysterious. It gives the illusion of the outdoors seen from the windows as being one with the house itself. I felt awakened when I moved in. I noticed how capricious the skies were, and how diverse human expressions and movement are.”