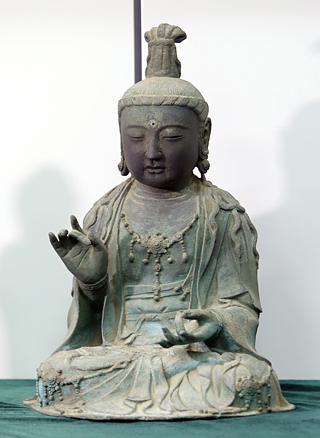 A seated Bodhisattva created in the 14th century during Korea’s Goryeo Dynasty (918-1392) was going to be taken to its place of origin, Buseok Temple in Seosan, South Chungcheong, but a court ruling on Wednesday said it should be kept in the government’s custody for now. The statue was stolen from Japan’s Kannonji Temple by Korean thieves in 2012. [YONHAP]

Recent court decisions regarding a 14th-century Buddhist statue that Korean thieves took from a Japanese temple give an insight into the complexity of determining who is the rightful owner of displaced artifacts.

The decisions - made just six days apart - contradict each other.

The statue is of Korean origin. A record inside the statue says that it was made by Korea’s Buseok Temple in Seosan, South Chungcheong in the 1330s, and managed by the temple until the 1370s.

The big question is just how it ended up in Japan’s Kannonji Temple in Tsushima, from which a ring of Korean bandits stole it in October 2012.

Did the Japanese loot it during its numerous invasion attempts or during the colonial era (1910-45)? Or was it a gift from Korea to Japan? Or did Korea sell it to Japan?

The inability to fully answer this - or to be more exact, answer this with proof - is exactly why this issue has found no solution over the past four years or so.

On Jan. 26, the Daejeon District Court ruled in favor of Buseok Temple, which filed a lawsuit against the Korean government in April to take back the statue, saying the statue is indeed the possession of the Korean temple and it seems that it was moved to Japan through theft or looting and not given as a gift or sold.

As a result, on Tuesday after the Lunar New Year holiday, monks of the temple visited the Cultural Heritage Administration in Daejeon, where the statue is currently kept, to discuss just how and when the statue will be moved to the Buseok Temple.

But on Wednesday, another justice department within the same court accepted the injunction that Korea prosecution filed, banning the statue from being moved to the Korean temple. Immediately after the Jan. 26 ruling, the prosecution appealed the ruling and sought an injunction to temporarily suspend the execution of the ruling to hand over the statue to Buseok Temple.

The prosecution said, “handing over the statue raises concerns on possible damages to the statue.”

According to Yonhap News, a source within the prosecution asked “can we say an artifact we stole is ours?” adding that “for the sake of patriotism, we certainly don’t want to return the statue [to Japan], but there are some elements that could work against Buseok temple from a legal perspective.”

It’s easy to assume that the statue must have been stolen or looted by Japan. Nearly 150,000 Korean cultural properties are kept overseas, 44 percent of which are in Japan.

Those who claim that Japan must have taken the statue from Korea by force argue that the record specifically states that the statue was to be permanently kept at the Buseok Temple and that there is no record that it was donated.

However, it’s also true that there is no hard evidence, for now, that the statue was illegally taken to Japan.

That is why how this saga will end - or unfold - remains extremely unclear, as is the statue’s destiny.