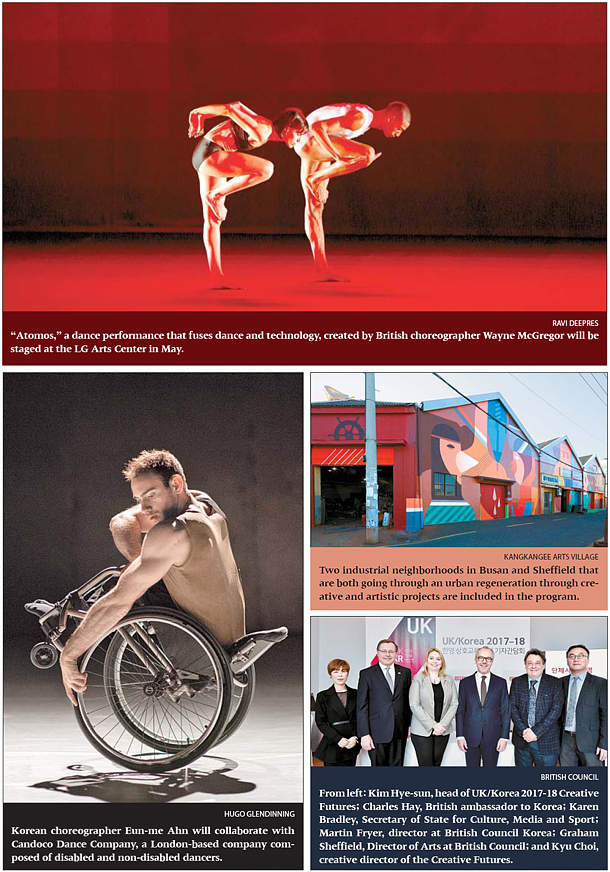 This year, Koreans can get a taste of Britain thanks to the series of cultural events organized for “2017-18 Creative Futures,” which was designated between Korea and the U.K. last year to engage in a more active cultural exchange by the two countries. The kick-off program was held Monday evening at the Seoul Arts Center with a concert by the prestigious London Symphony Orchestra under the baton of Daniel Harding. There’s been a number of collaboration projects and cultural activities between Korea and the U.K., but according to the British Council, “this will be the first official event to more professionally support the exchanges.”

“I am delighted officially to open the UK/Korea 2017-18 Creative Futures. The bonds between our countries are already strong, and this will strengthen them further,” said Karen Bradley, Secretary of State for Culture, Media and Sport, during the press conference in Seoul on Monday. “The Creative Futures season will also help develop new approaches to creativity, through collaborations between artists and arts organizations from both our countries.”

Until next March, there will be about 31 cultural programs involving dance, theater, film, visual arts, literature, music, architecture and design in Seoul as well as other cities including Busan, Cheongju, Jeonju and Tongyeong. The programs will feature five key themes: City to City; Transformation and Innovation through Digital Technology; Diversity and Inclusion; Creative Entrepreneurship; and Creative Learning.

Martin Fryer, director at British Council Korea, said Koreans “generally are familiar with the U.K.’s cultural heritage, and less with our contemporary artistic achievements. We have therefore, designated a program that aims to give an up-to-date look at arts from the U.K.”

Among 31 programs of diverse genres, performing arts and visual arts programs are dominant.

Under the theme of “Diversity and Inclusion,” there will be several dance performances by disabled dancers and dance troupes from both countries. Korea’s leading modern dance choreographer Eun-me Ahn will collaborate with the Candoco Dance Company, a London-based company composed of disabled and non-disabled dancers. After working together for six weeks, the performance will be held next March. There will also be a Disability Arts Leadership Development Workshop, where U.K. professionals in the field of disability arts will be invited to Korea to do a leadership workshop program as well as an inclusive art workshop for disabled and non-disabled artists.

There’s also going to be a film screening in November to touch on the issues involving the human rights of sexual minorities. In partnership with the Seoul Pride Film Festival, British films that offer audiences an opportunity to improve their understanding of LGBT issues will be held, according to the British Council.

More and more performing arts troupes are fusing technology into their performances. Under the theme “Transformation and Innovation through Digital Technology,” there will be an opportunity for Korean audiences to see “Atomos,” a work created by the multi-award-winning British choreographer Wayne McGregor in May at the LG Arts Center. According to the British Council, McGregor, “who is renowned for his unique, tenacious questioning across the interface of art and science and through the body and mind, remained at the forefront of contemporary arts for the past 20 years.”

Under the “City to City” theme, there will be a project titled “Connected City” which will take place in October. By collaborating with the upcoming Seoul Biennale of Architecture and Urbanism and the urban regeneration centers near Seoul Station, the project will carry out activities such as creating public space arts events where audiences and local communities connect and have special experiences, explore and reimagine their own city.

“Through the project, we will introduce the innovative practices of city projects of the U.K. to Korea and explore the opportunities for the collaboration of artists and creators from both countries,” said Choi Kyu, creative director of “Creative Futures.”

Meanwhile, there have been criticisms concerning the programs under the “Creative Futures” year, as many of the programs were organized well before the designation of this year of cultural exchange, as well as the lack of programs compared to the recent 2015-2016 Korea-France Year that featured more than 300 cultural programs in both countries.

“Unlike previous events [between Korea and other countries], this year-long event has been organized not by the government, but by private arts and culture organizations in two countries,” said Choi. “I believe, we have to avoid having government take the lead in organizing cultural events.

There will also be a year full of programs for British citizens as well, starting from July to June next year. Details of the events in the U.K. will be announced next month.