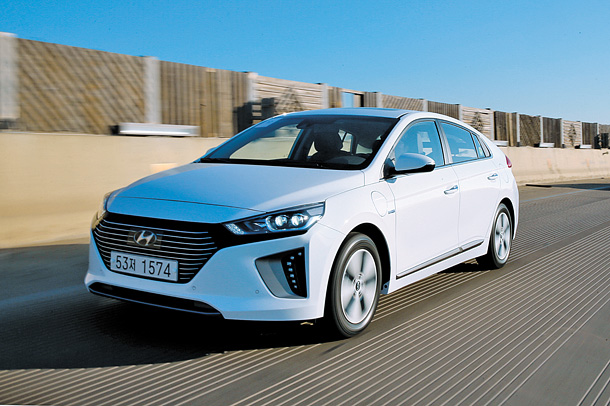 Hyundai Motor launched the last version of its three Ioniq models on Monday. The plug-in hybrid can travel up to 900 kilometers (560 miles) on a full charge of its battery and a full fuel tank. [HYUNDAI MOTOR]

Hyundai Motor completed its green-car initiative by launching a plug-in hybrid version of its flagship electric car Ioniq in Korea on Monday.

The automaker introduced the hybrid version of Ioniq in January 2016, followed by an electric version in March.

The plug-in hybrid version, which can run both on gasoline and an electric battery, will satisfy those who have shunned battery-run cars out of concern they would stall while driving.

The car is equipped with a Kappa 1.6 GDi engine, the same one in the hybrid version, and can travel as far as 900 kilometers (560 miles) on a full charge and full tank of gas. 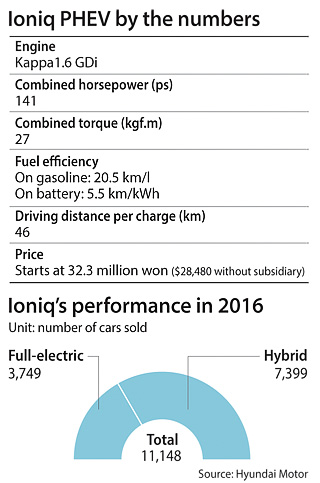 On battery alone, which takes 2 hours and 15 minutes to fully charge, the car can travel for 46 kilometers.

Hyundai Motor said drivers can save up to 1.64 million won ($1,447) a year with the latest Ioniq compared to a gasoline model in the same segment.

“The plug-in hybrid version of the Ioniq is an apt car for those who commute in urban areas during the weekdays but want to go outside the Seoul area during the weekend,” said Cho Sung-kyun, general manager of Hyundai Motor’s domestic product marketing.

“Ordinary driving within the metropolitan area is possible with only the electric battery.”

The latest version of the Ioniq has also reflected customers’ opinions about its two previous models, mostly dealing with services.

The automaker will provide a one-stop consulting service to drivers of the electric version who want to install a battery charger at their houses for free.

Batteries in the hybrid, electric and plug-in hybrid versions come with a lifetime guarantee. The resale price for used cars will also be temporarily guaranteed by Hyundai Motor. All versions of the Ioniq less than one year old will be guaranteed for 75 percent of its purchasing price on the used-car market, under the condition the driver buys another Hyundai within three years.

Hyundai Motor said Ioniq will not only be a platform for its eco-friendly cars but will act as a quintessential part of Hyundai Motor’s future mobility strategy.

The plug-in hybrid has been equipped with a number of smart-car technologies which acknowledge car lanes and control the steering wheels to help the driver stay inside the lanes. It is also equipped with Auto Emergency Braking, which helps the driver stop the car to avoid a collision with other cars or pedestrians.

Hyundai Motor hopes to sell 30,000 units of three Ioniq models this year. Last year, it sold 11,148 vehicles, 7,399 of which were hybrid and 3,749 electric. The electric Ioniq alone accounted for 63.9 percent of the electric car market in Korea last year.

The auto company estimated the global market for plug-in hybrids will grow to 2.2 million units by 2020. Hyundai said it will expand the green car lineup to 14 models by the year of 2020.

Prices of the Ioniq plug-in hybrid start at 32.3 million won without government subsidy.