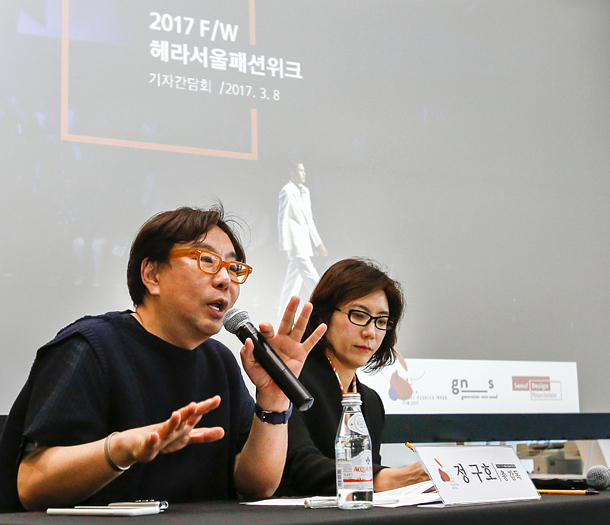 Seoul is preparing to kick off 2017 Hera Seoul Fashion Week to show off what the top brands in Korean fashion have to offer for the upcoming fall and winter seasons. Starting March 27 at Dongdaemun Design Plaza, central Seoul, the week-long event will showcase new collections from 65 designer brands and six fashion companies.

The event’s executive director Jung Ku-ho, who is also a designer of his brand KUHO, revealed his ambitions to make the upcoming event “a true fashion festival that thousands of regular visitors can come and enjoy,” during the press conference held at DDP on Wednesday.

Jung said that Seoul Fashion Week differs from other fashion weeks, as the core theme of this event is sharing and sympathizing with the public.

Unlike in the past where the event had a hard time getting sponsors, many big conglomerates such as Hyundai Motors and Line Friends are supporting the event, helping the event gain recognition globally.

To allow more public engagement, the runways will be streamed live via Naver V-Live. A large screen will also be installed in the DDP square, to allow visitors outside the opportunity to watch the show live.

Meanwhile, Jung emphasized that Korean fashion still has a long way to go to secure its position internationally “as it is about 30 years behind Japan while still relying heavily on Chinese buyers.”

According to Jung, more than 60 percent of the buyers who will visit Seoul Fashion Week come from China.

During the week-long festivities, a trade show dubbed Generation Next will run concurrently on the third basement level of DDP.

Here, domestic and international buyers can freely interact and sign contracts with the fashion brands who are putting the new collections on display. About 140 buyers will attend, including senior buyers from big department stores such as Lane Crawford, Harvey Nichols Hong Kong, and Barney’s New York. Approximately 70 fashion brands are expected to visit the trade show.