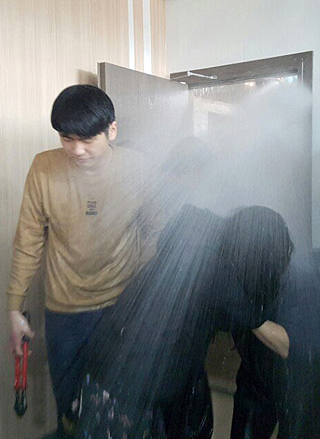 Students get soaked by a fire hose in the main building of Seoul National University in southern Seoul on Saturday. [YONHAP]

The 153-day sit-in at the main building of Seoul National University came to an end on Saturday after a violent scuffle between students and faculty members, who emerged from the building either covered in fire extinguishing agents or soaking wet after being blasted with water from a fire hose.

But the student-university conflict seems far from over.

“We demand the resignation of President Sung Nak-in over the violence,” a student engaged in the movement said at a press conference on campus on Monday.

Earlier that day, the university’s newspaper, Daehak Sinmun, published a blank front page with an explanation that read, “We are publishing the front page blank in protest of the meddling of a former chief editor and professor and the university.”

The main building of the university campus in Gwanak District, southern Seoul, was occupied by students from October over a university plan to build a campus in Siheung, Gyeonggi. Students demanded the university scrap the plan, which they called a scheme to turn the academic sanctuary into a business.

“According to the university administration document, the new campus in Siheung will have commercial facilities like a kids’ cafe, hotel and commercial and residential complex for the elderly,” a student group engaged in the sit-in posted on their Facebook page last month. “The university says it needs extra funding to run as a globally renowned institution, and so is planning on running the campus like a business and increasing tuition. This is the worrisome reality of the commercialization of universities. The campus in Siheung has no academic vision, but a clear business plan.”

The president told students in a meeting in October that the Siheung campus plan had been “ongoing for the past 10 years and therefore cannot be scrapped on a whim,” according to Seoul National University Journal, an independent student-run paper of the university.

But the students did not budge, and on March 6, the university sent a warning to them to not meddle with its attempts to move furniture into the main building that week. Some 20 students engaged in the sit-in called for back-up and the number grew to about 50, according to the student council. They locked the entrance to the building with chains.

The remaining students continued to occupy the fourth floor of the building until around 3 p.m. At that time, students who had been dragged out of the building tried to re-enter. They broke down a wooden door on the side of the building, but after they got in, they were stopped by faculty members who blocked an inner doorway with a large bookcase.

A student sprayed a fire extinguisher into a gap of the doorway, and afterwards they were met by jets of water from a fire hose, used by a faculty member on the other side of the bookcase.

The scuffle ended around 6:30 p.m. after a fire alarm was sounded. All students and faculty members left the building.

“This is the 21st century, yet some members of the faculty used a water hose on students,” said Lim Soo-bin, vice president of the student council. “This is no democracy.”

“The students used a fire extinguisher on us, so we were trying to clean that off by using a water hose,” the university said in a statement. “We used the hose on the students when they tried to climb over the bookcase.”

“Those who were engaged in the sit-in said they started it with the consensus of the student body, but I don’t think all of us students agree with what they’re trying to do,” said a 23-year-old surnamed Kim, a senior at the university. “Their fight is being led by a few hardliners who are not necessarily wholly justified, and it seems to reflect a bit of Korean society.”

“It is unfortunate that these issues are taking place on a university campus,” said a professor under the condition of anonymity, “where human rights and freedom of the press must be upheld and protected.”