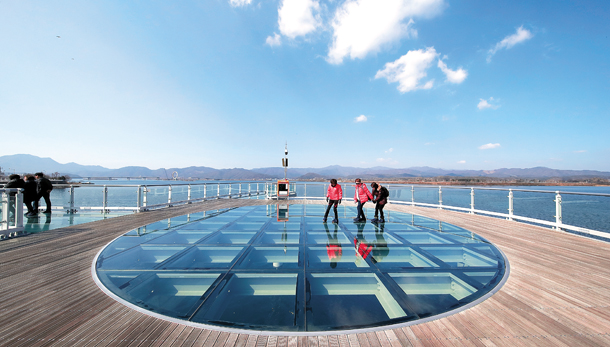 The Soyang River Skywalk, which has become a landmark of Chuncheon, Gangwon. Underneath the four-centimeter thick glass floors lies the Soyang River. [LOCAL GOVERNMENTS, LIM HYUN-DONG]

More and more, people are traveling across the country looking for new sights, and some of the nation’s most appealing attractions are right under their feet. Looking down, one can see a bottomless cliff, crashing waves or a raging river. These are just some of the things seen at observation decks with transparent floors - otherwise known as skywalks.

Skywalks are being introduced throughout the nation. Local governments that were busy installing wooden decks when walking tours were popular, and installing bicycle lanes when the nation saw increases in riders a couple of years ago, are now going out of their way to construct skywalks.

The Soyang River Skywalk in Chuncheon, Gangwon, is an example of a successful skywalk. “Since the opening of the skywalk in July, we have seen over 600,000 visitors,” said Oh Myeong-gyu, head of tourism development of Chuncheon. “Even in December, which is regarded as [part of the] off-season, more than 2,500 people came each weekend, with a number of foreigners also visiting as well. The business district is also booming.”

This phenomenon isn’t limited only to Chuncheon. Byeongbangchi Skywalk in Jeongseon, Gangwon, and the Songdo Beach Skywalk and Oryukdo Skywalk in Busan have all become landmarks of their respective cities.

Two skywalks will be opened to the public during the first half of this year. The bridge that connected Bandong road in Changwon, South Gyeongsang, with the small island of Jeodo, will be reborn as a skywalk on March 28, while on the riverside of Namhan River of Danyang, South Chungcheong, an observatory with a zip line named the Mancheonha Skywalk is expected to be completed sometime in May. Ulju county in Ulsan is also preparing for the longest skywalk in the nation, which will stretch up to 400 meters (0.25 miles), in Ganjeolgot. The bridge is slated to open at the end of 2018.

The Grand Canyon in the United States is home to the original skywalk. The attraction is in Grand Canyon West - 300 kilometers (186 miles) west of Grand Canyon National Park. Unfortunately, a sad story comes with the skywalk - when the US government designated the famous canyon as a national park, the government kicked out Native Americans that resided in the South Rim and North Rim regions to the west, which are known for their beautiful scenic views of the gorge. The evicted Hualapai, who had no source of profit, created the skywalk in 2007 after much deliberation. The number of tourists skyrocketed, with more than a million visiting in 2016 alone. There was an issue of visitors damaging nature, but a yearly income of more than ten million dollars improved the living standards for the struggling Hualapai. Locations all around world are creating observatories modeled after the one at the Grand Canyon.

While lacking the sad backstory of the skywalk at the Grand Canyon, many local governments’ situations are not much different. Many existing tourist attractions are not enough to lure tourists to the region. “For years Ganjeolgot has been a landmark for watching the sunrise, enjoying many visitors to the area. However, many felt that the area lacked other attractions,” said Roh Ok-hee, head of the parks team of Ulju County, “Viewing the sunrise on the skywalk extended to the sea will differentiate Ganjeolgot from other locations.”

Like the phrase “the view is different from where you stand,” the skywalk provides beautiful scenery.

The JoongAng Ilbo, an affiliate of the Korea JoongAng Daily, visited a number of skywalks across the country. We introduce eight skywalks in Korea. Their names may be similar, but all of them have distinct characteristics to appeal to visitors. With spring just around the corner, these eight skywalks provide a breathtaking walk amongst the clouds. 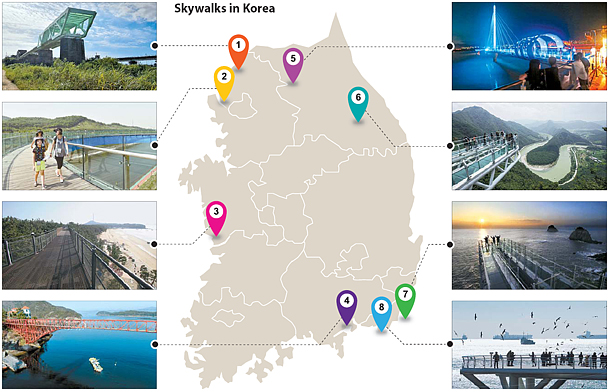 The world’s only skywalk inside a demilitarized zone

This skywalk is inside the famous DMZ. It was completed in December of last year after connecting five railroad bridges in the northbound lane of Gyeongui Line, which was destroyed in the Korean War (1950-53). The name “Whistle for Tomorrow” was given by poet Ko Un. As it is a symbol of the nation’s divide, it focused on promoting its historical meaning.

From the entrance to the second floor observatory, the path is designed to have visitors time travel from the past to the future. The entrance is a reconstruction of the railroad from before the Korean War.

The interior is reminiscent of a steam locomotive, and also exhibits old photographs. A portion of the floor is glass, but doesn’t give much of a thrill due to it being only ten meters high. The scars of the war remains, with bullet marks and old tracks and railroad ties used in its original state. On the second floor observatory, a scenic view of the Imjin River is spread out in front of visitors.

The highlight of the Gyeong-in Ara Waterway

On the Gyeong-in Ara Waterway, an 18 kilometer-long waterway connecting Seoul and Incheon, lies the Ara Waterway Observation Deck, located just a kilometer away from the Sicheon Bridge in Incheon. The observatory is on the second-highest mountain in Incheon, Gyeyang Mountain. The semi-circle shaped observatory stands 45 meters above water, and is modeled after the skywalk of Grand Canyon, according to the guidebook. For people with a fear of heights, even placing a foot on the glass is a daunting task. Out of the 45-meter length, half of the floor is made of glass. On the other side of the Observation deck is Maehwa Garden, a perfect place for spring outings. The observation deck is also amazing at night with its excellent lighting system. It also has a cafe near the entrance.No admission fees

Become a Taoist hermit that walks the pine forest

Janghang Pine Forest Park is an artificial windbreak forest formed by Janghang residents to block the sandstorms coming from the west. This project started 50 years ago, and has become a forest that holds 25,000 pine trees in an area of 120,000 square meters. In this pine forest, the Janghang Skywalk was constructed in March 2015, and recorded 330,000 visitors in 2016 alone. Atop the spiral staircase is a deck suspended in midair, with a length of 236 meters and a height of 15 meters. It was Seocheon county’s intention to make the height of the skywalk similar to the height of the pine trees. “People who enjoyed a stroll through the woods looking up at the pines can now experience the pines from a higher viewpoint,” said Park Hyeon-wook, action officer of Seocheon County. Walking along the deck, you’ll find yourself out of the forest and facing the Yellow Sea. When there’s fog, you might just be able to experience walking on the clouds.
2,000 won, free for Seocheon residents.

Changwon’s Bridge on the River Kwai

Jeodo Bridge in Changwon will be the first glass bridge to connect land and island when it opens on March 28. Before the renovation, the bridge was dubbed Changwon’s Bridge on the River Kwai, due to the similar design with the one featured in the 1957 movie “Bridge on the River Kwai.” The city invested seven hundred million won to transform it into a skywalk.

The 170 meter-long bridge is popular amongst couples, with many young couples of Changwon proposing to their loved ones on this bridge. Also in Jeodo is a trail called Beach Road. Like its name, it’s a trail by the beach, lined with pine trees planted near the trail. No admission fees

The thrill of walking above a transparent river

Near the Soyang riverside in Geunhwa-dong, Chuncheon, is a statue commemorating the famous song “Soyang River Lady,” dubbed the Soyang River Girl Statue. Look left from there and one can see an observatory which seems like an unfinished bridge. This is the Soyang River Skywalk that opened last July, recording more than 600,000 visitors until late February.

The 156-meter walk features transparent floors and railings. Visitors need to put covers on their shoes to prevent damaging the glass floors. “To maintain the feeling of walking on water, we have to keep the glass floors transparent,” said Ma Deuk-hwa, administrator of facility of Soyang River Skywalk. “We are also replacing film placed on the glass floors bimonthly.”

The success case of domestic skywalks

In the middle of Byeongbang Mountain, 816 meters above sea level, is a peak called Byeongbangchi. It’s a pass that residents of a small town of Gyulamri had to go over to reach the town of Jeongseon before the road was paved. At the peak that’s filled with joys and sorrows of former residents, the Byeongbangchi Skywalk, a U-shaped observatory with glass floors, opened in June of 2012.

The Byeongbangchi Skywalk is regarded as a success, garnering young visitors in their twenties and thirties to an otherwise hard-to-reach county deep in the mountains. Young visitors are often seen willingly stepping out onto the furthest glass platform to take selfies. The scenic view of the flowing Dong River and Bam Island, which resembles the shape of the Korean peninsula, helped add to the site’s reputation. It also features a zip line that starts from a height of 607 meters, zipping above the beautiful Bam Island to ground level.

Float atop a dizzy cliff

The Oryukdo Skywalk in Yongho-dong in Busan is an observatory made on top of a seashore cliff, standing at 37 meters above sea level. The name Oryuk comes from the Korean words for five and six, as the island has six rock-isles, but appears to have only five during low tide.

Since it’s opening in 2013, the skywalk has been a landmark of Busan, with an average of more than five thousand visitors daily during the weekends. The U-shaped skywalk protrudes from the cliff towards the sea, and is fitted with tempered glass. Underneath the skywalk, the cliff is visible, while the vast South Sea and Oryukdo is visible as well. To walk along the skywalk, one needs to cover their shoes to prevent damaging the glass. Umbrellas and walking sticks are banned as well. When the weather is clear, Park Marina Tower at Haeundae Beach, is visible as well. Entrance is limited to 120 people at one time and the wait usually lasts about 10 to 15 minutes to get in due to its popularity. Entrance is closed during windy and rainy days. No admission fees

Walk above the ocean

Songdo Beach, located in Amnam-dong in Busan, was the first beach to open to the public in Korea, opening in 1913. Once regarded as one of the best vacation spots in Busan, the beach has seen a decrease in visitors since the 1970s, as the sandy beach area was damaged due to development. A decade later, the beach was stripped of the title of being the best beach in Busan by both Haeundae Beach and Gwangan Beach.

To reclaim its past glories, Seo District has worked hard to repair the beach since 2000. The pinnacle of that effort is the Songdo Beach Skywalk, a 365-meter bridge that is solely built above the ocean. The skywalk starts from the east end of the Songdo Beach, passes Turtle Island and ends at a lighthouse standing in the middle of the ocean. It’s made up of a section of tempered glass, a section deck road and grated flooring, giving a different view of the ocean below. No admission fees.