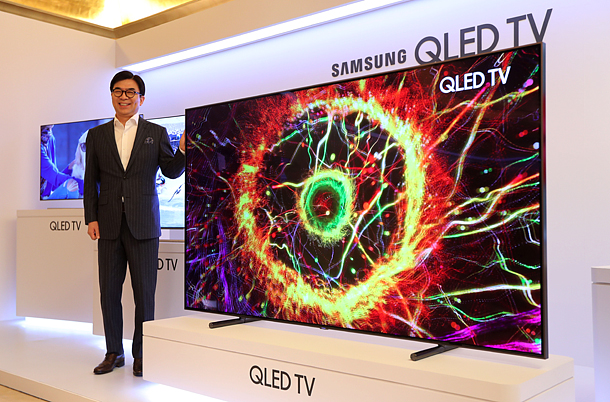 Korea’s two leading television producers, Samsung Electronics and LG Electronics, are in for a fierce battle in the liquid crystal display (LCD) TV market, each claiming they have higher-quality definition.

Samsung on Tuesday released its latest lineup of TVs based on the upgraded version of its quantum dot technology, dubbed QLED TVs, to the local market following the nano cell TVs LG unveiled last month.

Quantum dot technology uses film of semiconductor nanocrystals to enhance TV color definition while the nano cell technology applies light-absorbing nanometer materials directly to part of the LCD panel for a similar effect. For new QLED TVs, metal was applied to the nanocrystal material to enhance color and brightness.

Both companies say their latest technology outpaces their rival’s.

“Based on the new quantum dot technology we can produce 100 percent color volume, which is a new standard for color expression,” Samsung said in a statement Tuesday. “Generally, a TV’s color-rendering capabilities diminish as brightness levels go up, leading to color distortion on-screen. The Samsung QLED TV overcomes the trade-off between brightness level and color.”

According to the company, expanded color volume results in more realistic, accurate and vibrant images regardless of how light or dark the scene is or whether the content is played in a brightly lit or dark room.

“The QLED TV will put an end to ongoing debates surrounding TV’s image quality,” said Kim Hyun-suk, head of Samsung’s display business at a press briefing on Tuesday. “There has been no other TV that can deliver the details and color of QLED TV and it will completely reshape traditional concept of TVs.”

LG Electronics however, said Samsung’s QLED is not much more developed than current LCD TVs and is far from what the naming of QLED should be representing: self light-emitting quantum dot displays.

“Samsung would like to compare its QLED TVs with our OLED TVs, which are based on organic light-emitting diodes, but the two actually aren’t comparable as unlike OLED TV, the QLED TV still requires an additional backlight unit,” said Kang Kyung-jin, a research fellow at LG Electronics.

LG claimed the QLED TV should be compared with its nano cell TV, its new premium LCD product that significantly enhances color definition and addresses viewing angle problems through the special nanometer material it applied directly to the panel instead of adding in an additional film like the quantum dot film.

“Enhancing color reproduction capability by adding a film between backlight unit and display panel is a second-generation method while enhancing the panel itself is a third-generation method,” said Lee Hee-young, a leader of TV product planning team at LG Electronics. “Nano cell technology is ahead of quantum dot technology as it improves the panel itself by directly applying special nanometer materials.”

WitsView, a division of market intelligence firm TrendForce also pointed that the current form of Samsung’s QLED is not much different from LCD in its report released Monday.

The self-emitting quantum dot display is expected to arrive after 2020.