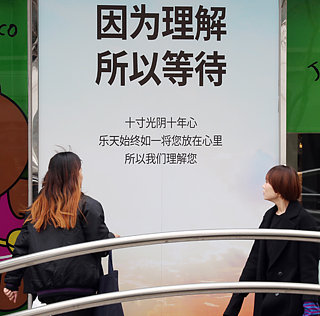 People walk past a poster appealing to Chinese consumers at Lotte Department Store in Myeong-dong, central Seoul, on Sunday. [YONHAP]

Lotte Group, the largest Korean retailer affected by Chinese trade restrictions after Seoul approved deployment of a controversial U.S. missile shield in Korea, has stepped up efforts to assuage Chinese consumers, going as far as telling them that the company will “wait” for them to return.

Over the weekend, a large sign was posted on one of the windows at Lotte Department Store in Myeong-dong, central Seoul, with the words, “Because we understand you, we will wait,” in Chinese. Several others were posted at Lotte Young Plaza across the street.

The Myeong-dong area was a prime shopping destination for many Chinese tourists, and Lotte’s duty-free shop there made 80 percent of its revenue from Chinese visitors.

But ever since the Chinese government banned group tourism to Korea on March 15, ostensibly in response to the missile shield deployment, the department store and the Myeong-dong area in general saw a steep decline in Chinese customers.

Across the street at Lotte’s convenience store 7-Eleven, the same poster appealing to Chinese consumers was posted by the entrance.

“Ten minutes of time is 10 years of heart,” the sign said, referring to the 10 years that Lotte has done business in China and riffing off a Chinese metaphor that roughly translates to time is precious. “Lotte has consistently held you in our heart, so we understand you.”

A similar banner adorned the main gate, escalator and client lounge at the Jamsil branch of Lotte Department Store in southern Seoul. Lotte plans to feature such messages at other locations and operations in China.

The conciliatory efforts come as China intensifies apparent consumer retaliation against Lotte for giving up land at its golf course in Korea to host the missile shield. Over 20 Lotte Mart locations in China have been shuttered, and a Lotte Confectionery factory has been suspended by Chinese authorities.

Apparently feeling the pinch, Lotte has fostered a series of friendly moves designed to assuage China.

Lotte Shopping on Friday announced it would issue new shares worth 230 billion won ($206 million) and borrow 130 billion won in order to maintain its Chinese Lotte Mart locations. The combined fund worth 360 billion won will be directly funneled to Lotte’s Chinese operations.

Even Lotte Group Chairman Shin Dong-bin has set out to make appeasing remarks to the Chinese people. “We definitely want to continue our business in China,” he said in an interview with The Wall Street Journal on Thursday.

Shin added that he “loves” China and believes there has been a “misunderstanding.”