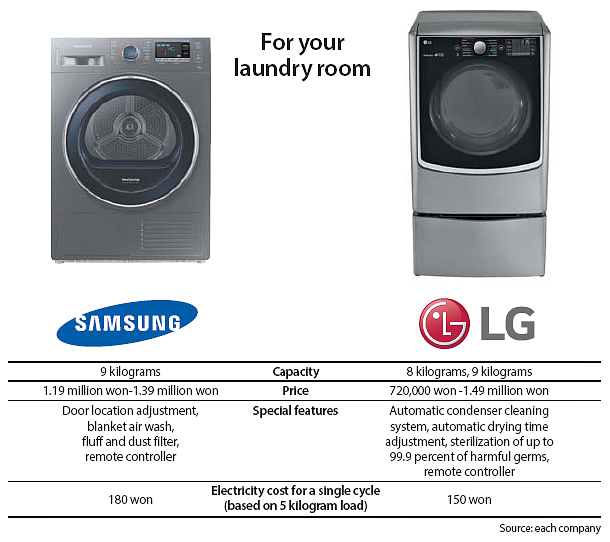 Electric clothes dryers have been part of the daily washing routine in American and European homes for years. Now Koreans are catching onto them, helped by a rise in fine dust air pollution.

Samsung Electronics has jumped on a bandwagon pioneered by rivals LG Electronics and Rinnai, a leader in gas dryers.

On March 13, Samsung launched three models with 9 kilogram (20 pound) capacities, eight months after LG came up with a series of dryers in two sizes: 8 kilograms and 9 kilograms.

Samsung was selling dryers to corporate clients in Europe and the United States, where the markets were already established. Its entry into the market for Korean homes is somewhat belated.

“We decided to enter the consumer clothes dryer business after reaching the conclusion that market has matured to a sufficient level in Korea,” said a Samsung spokesman.

According to Lotte Hi Mart, Korea’s biggest electric appliance retailer, sales of clothes dryers in the first two months soared 13 times compared to the same period a year earlier. Some 100,000 units were sold last year, double the figure from 2015. For all of 2017, sales are expected to almost quadruple, producers forecast. Some predict the market could surge to as many as 1 million units a year in 10 years.

Korean households are increasingly concerned about the quality of the air. Dryers also ease reliance on weather conditions for drying of laundry outdoors.

Drying laundry indoors may pose health risks to people prone to allergies and asthma and contribute to growth of dust mites, some research has shown. Another factor is that producers have concentrated on the cost of running the machines, a key barrier to their adoption earlier.

Heat pump technology, prevalent in Europe for over a decade, uses less energy than conventional dryers that release hot air to dry to clothes. Heat pump dryers operate at 50 degrees Celsius (122 degrees Fahrenheit), lower than the 80 degrees of older dryers.

It costs about 150 won (13 cents) for LG’s Tromm electric dryer to run a single 5 kilogram load. Samsung’s models use 180 won worth of electricity. The cost to run an electric dryer is about one fifth the level for gas dryers.

The latest electric dryers from both LG and Samsung also boast special features such as fluff and dust filters.

Gas dryers, the most popular type before LG came up with its electric dryer, power a fan that blows hot air through the machine using natural gas or propane. They take less time - typically less than an hour for a load. They also sterilize clothes, given their high temperatures.

Rinnai’s Dry-Soft is a household name for gas dryers in Korea. Coming in two sizes - 4 and 6 kilograms - Rinnai models boast powerful sterilizing ability and wrinkle reduction. But users have to have a gas line professionally installed.