Chef Kim Dae-chun of restaurant TocToc in Gangnam District, southern Seoul, is plating in his restaurant’s kitchen. At right is some of the dishes Kim serves at TocToc. [PARK SANG-MOON]

Going beyond K-pop and TV dramas, Seoul has been developing its name as a food destination for international diners recently with many talented chefs showing their creativity on plates. With many restaurants rated and introduced by global organizations like the Michelin Guide, or the World’s 50 Best Restaurant and Asia’s 50 Best Restaurant lists, the names of local restaurants have been spreading by words of mouth. However, there is still not so much information available on the chefs behind the kitchen who serve local and international diners, and that makes it harder for foodies to get to know more about the ideology each chef has before deciding where to go during their limited time in Seoul. Hence, the Korea JoongAng Daily now tells the world the in and outs of up and coming young chefs that are under 40 and that are shaping up the culinary scene in the peninsula. Meet these talented chefs every other week.

Ingredients dictate what is served at a restaurant named TocToc run by chef Kim Dae-chun, which was recently named as “One to Watch” by Asia’s 50 Best Restaurant list. Instead of chef Kim deciding what ingredients he will use to cook for his guests, his daily menu is set based on what quality ingredients are delivered to the hands of the chef.

This elastic approach to cook up what is available each day has trained him over the past four years how to make very detailed adjustments based on the conditions of the ingredients for more pleasant dining experience for his guests. When an eggplant is too moist, he fries them with the skin, then peels off the skin, waits for it to cool and then cooks it further. If he finds the eggplant to be too stiff, he cuts them first, fries it and then adds some sauce to soften the texture, before grilling it. 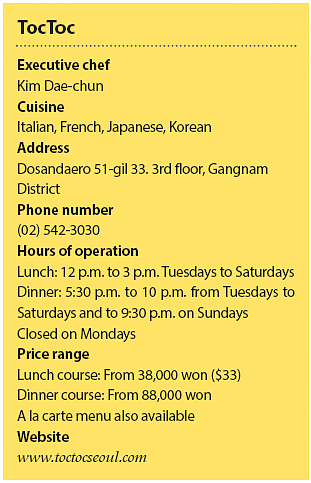 “I have made and tasted over 300 different dishes in the past four years, so I have adjusted myself to respond to ingredients available in Korea and figure out how to properly cook them,” said Kim.

His approach to cooking only what is available to him dates back to his childhood. His parents were busy so he had to often cook for himself. Cooking became one of his hobbies. The first time he made rice was soon after he entered elementary school, and he made his first donkatsu in third grade.

What ignited his passion for cooking was the oven he had at home. Without the Internet, what guided him to master his skills was a free recipe book that came with the oven.

“I believe all of the food that I ate when I was young still influences my current self,” said Kim.

He also had access to an abundance of seafood as his grandparents are from Wan Island in South Jeolla. “The memory of trying out different seafoods may have inspired me to use dasima, a type of seaweed used often in my dishes, including making dasima butter,” the chef said. “The ingredient is very independent but also works very well with others to create umami.”

The accessibility to fresh seafood has made his tolerance for mediocre seafood very low. He doesn’t eat any seafood that smells funny, and he only buys the top quality seafood regardless of the cost. A grouper captured in the morning arrives at his restaurant at around 5 p.m., just before dinner begins.

“I don’t serve things that I don’t or can’t eat to customers,” said the chef.

As his creed is to use what’s fresh, around 90 percent of ingredients used to cook at his restaurants are grown or found locally. He even works with farmers to plant new seeds to see if what’s not yet available in Korea can be successfully grown. About three years ago he brought in 40 different types of radish seeds and a local farmer planted them, but only a few types grew successfully. But he continues trying to show local farmers that a market for premium produce exists and to raise the overall quality of what’s grown in Korea to a higher level.

“I’ve had to endure a lot,” said Kim as he seemed to be shaking away the heavy weight he had to carry from one subway station to another when he was researching ingredients overseas. Now what used to be rare, such as truffles or foie gras, is more easy to find without much trouble for chefs to test them out.

Last year, he started a menu called Tocnomy that highlights the identity of TocToc. The restaurant hasn’t really defined itself with one cuisine, as the chef first learned cooking Western-style food in Japan in early 2000s. He also would not attempt to label his cuisine one thing, like Italian, French, Japanese or Korean. To provide an in-depth opportunity to understand what he does, he started Tocnomy that is comprised of dishes that change daily. To help interested diners understand what he does to make each dish, he makes 10- to 15-minute videos to show how ingredients become dishes to post online.