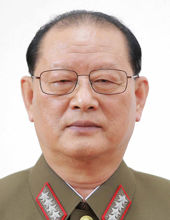 While reporting the event earlier this week, the state-run Korean Central News Agency did not mention that Kim Won-hong attended the 5th session of the 13th Supreme People’s Assembly, but it was unclear whether or not he was actually there.

The official’s statement adds weight to previous claims by local intelligence authorities saying that the spy chief was purged earlier this year for giving false reports to North Korean leader Kim Jong-un. The government source, who requested anonymity, said Kim Won-hong appears to be undergoing “political reeducation” in a prison camp, which could take several years.

The fact that he was absent from a crucial political meeting presided over by Kim Jong-un meant Kim Won-hong was “unqualified to be there,” continued the source.

But the official in Seoul downplayed any chance that Kim Jong-un will find a replacement for the former minister because the leader left the spot vacant in the parliamentary meeting, where personnel matters are normally discussed.

In other words, Kim Won-hong could be reinstated.

“Kim Won-hong was the only chief of North Korea’s top authority groups who wasn’t replaced after Kim Jong-un took the helm,” said the official, “and he played a pivotal role in the execution of Jang Song-thaek, Kim Jong-un’s uncle.

“It appears that [Kim Jong-un] is trying to use [the purge] as an opportunity to solidify his control over the State Security Ministry.”

Several South Korean government officials told the JoongAng Ilbo last month that the State Security Ministry, the equivalent to the South’s National Intelligence Service, has recently got on the wrong side of Kim Jong-un and is struggling to redeem itself.

The row began late last year, when the ministry arrested a senior official in the leadership of the North’s ruling Workers’ Party. The party official, who was questioned for a transgression, was said to have died in the hands of ministry interrogators who tortured him during the probe.

The State Security Ministry falsely reported this to Kim Jong-un, only to be caught when the Workers’ Party gave true accounts. Infuriated, Kim Jong-un ordered the firing of Minister Kim Won-hong and execution of five deputy minister-level workers, according to the South Korean sources.