Korea turns to Muslims for next big tourism boom

Korea turns to Muslims for next big tourism boom

Employees of Indonesian cosmetics company MCI on a trip to Korea in February. More than 1,100 employees were part of the trip, making it the largest group tour from Indonesia, where more than 85 percent of the population is Muslim. [KOREA TOURISM ORGANIZATION]

Lee Kyung-hee, a 41-year-old resident of Gangseo District, western Seoul, was pulling her car out of the Lotte Mall at Gimpo International Airport one Saturday afternoon when she spotted a man hunched over at a corner of the parking lot.

At first, she thought the man might have been intoxicated. He was facing the wall, completely silent, and it looked to Lee as he was trying to urinate in the parking lot.

After some observation, she realized the man was a practicing Muslim abiding by his prayer time.

“I feel sorry for Muslim visitors who have to search here and there for a place to pray,” Lee said. “I’m not sure if there were no prayer rooms nearby or if they were just not being promoted, but one sure thing is that Korea should be well aware of the situation and start making changes.”

The Korean government has been keen on attracting Muslim tourists to the country to fill a void left by dwindling Chinese visitors. After the Chinese government banned its travel agencies from organizing group tours to Korea in March, the number of Chinese travelers declined by 22.5 percent that month compared to last year, according to data from the Ministry of Land, Infrastructure and Transport.

The group travel ban is believed to be Beijing’s expression of disapproval with Seoul’s decision to deploy a U.S. missile shield that China says threatens its security.

Muslims have been considered an attractive alternative to make up for the decline in tourism. The number of Muslims visiting Korea has been increasing over the years, from 202,000 in 2001 to 980,000 last year, according to data from the government-run Korea Tourism Organization. Many of them are from majority-Muslim Southeast Asian countries like Indonesia and Malaysia and the Middle East.

The influx of Muslim visitors coming to Korea is outpacing the overall growth of tourism from abroad. Last year, the number of Muslim tourists was 33 percent higher than the previous year, compared to 30.3 percent for foreign tourists overall. And considering the 1.7 billion Muslims around the world make up about nearly a quarter of the earth’s population, the market also possesses great potential for the future.

In Korea, though, basic infrastructure for Muslim visitors remains an obstacle. Basic accommodations like prayer rooms and halal-certified restaurants that prepare food based on Islamic law fall far short of demand. 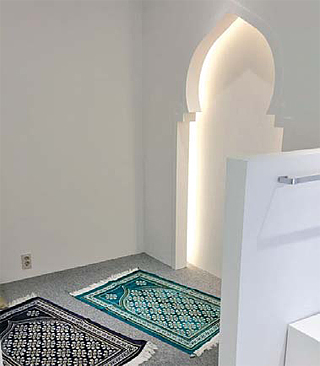 A Muslim prayer room at the offices of the Korea Tourism Organization in Jung District, central Seoul. [KOREA TOURISM ORGANIZATION]

Few places to eat and pray

Prayer rooms are considered especially important for the population. Islamic law requires Muslims to pray five times a day in the direction of Mecca after thoroughly washing their hands and face. In countries with significant Muslim populations, prayer rooms are ubiquitous.

But in Korea, there are only roughly 40 prayer rooms nationwide, mostly located in mosques, universities and hospitals. In commercial areas of Seoul frequented by tourists, there are only three prayer rooms: one in the COEX shopping mall and convention center, another in the Lotte World amusement park and a third in the offices of the Korea Tourism Organization.

A spokesperson from Incheon Airport said this was because there was not yet a “significant number of Muslim tourists or staff that work at the airport.”

It can also be difficult for Muslim visitors to find halal food in Korea, where pork is a staple part of the cuisine. Halal means “permissible” in Arabic, and restaurants with the certification do not use pork or ingredients from factories that process pork.

Currently there are only 13 restaurants in Korea officially approved by the Korea Muslim Federation, the only group in Korea authorized to certify halal food producers. Of them, nine are located in Seoul, with seven of them concentrated in the ethnic enclave of Itaewon.

The four restaurants outside Seoul are scattered in Gyeonggi and Gangwon provinces, making it difficult for Muslims to travel outside the capital.

“Eating here is so limited,” said a 29-year-old Muslim tourist from Malaysia who asked to go by Ida. “We usually go to restaurants that don’t serve pork in general, or seafood.” In the case of seafood, it is important that no alcohol is used during the cooking process.

“There should be more halal restaurants in all of Seoul,” said Hassan Mahmoud, a 30-year-old tourist from Dubai who was dining at a halal-certified restaurant in Itaewon.

Muslim tourists still have relatively low satisfaction with food provided in Korea, according to a survey released in March by the Korea Tourism Organization. There are few restaurants that serve halal food, and those that do are heavily concentrated in Itaewon. The price is also usually high compared to other cuisines. As a result, nearly 21 percent of Muslim tourists choose to bring food from their own country or cook while traveling in Korea, according to the survey.

Building up the infrastructure

The Korean government has an ambitious plan to attract 1.2 million Muslim tourists this year, which would be over 20 percent more than the number that came to Korea last year. To do that, it has acknowledged the infrastructure problem and announced plans to expand services for Muslim visitors.

On April 12, the Korea Tourism Organization said it would boost the number of restaurants for Muslims from 135 to 170 within this year. The current 135 restaurants include the 13 halal restaurants certified by the Korea Muslim Federation and 13 other self-certified locations where the owners and chefs are Muslim.

Another certification is pork-free, in which the dishes served are not necessarily halal but do avoid the use of pork. The other restaurants are so-called Muslim-friendly establishments designated by the Korea Tourism Organization. The approved restaurants offer halal menus but still sell alcoholic beverages as well. The designation went into place in 2015 to let Muslims know they can go there to eat, but it will not be a fully halal restaurant. The new restaurants will fall into one of these four categories.

The Korea Tourism Organization plans to promote these restaurants more heavily by extending a “Halal Restaurant Week” event that it started running last year from one month to two months. During the event, which will run from September, restaurants will offer special discounts and samples of halal food, both traditional and Korean fusion.

As for prayer rooms, the tourism organization said it would support local governments and public institutions in adding 15 more prayer rooms at tourist sites nationwide. The rooms will come with prayer rugs and a compass indicating the direction of Mecca.

Local governments are eager to attract Muslim visitors and ramp up tourism in their areas. Yongsan District, of which Itaewon is a part, will release its own map of halal restaurants and prayer rooms located in the district. The maps will likely be out in June.

Three metropolitan areas in the southeastern end of Korea - Ulsan, Busan and South Gyeongsang - have teamed up with the Jakarta office of the Korea Tourism Organization to attract more Muslim visitors to the area. Indonesia has the world’s largest Muslim majority: roughly 85 percent of its population, about 210 million people, is Muslim.

However, Seo Jeong-min, a professor of Middle Eastern and African studies at Hankuk University of Foreign Studies, believes a more profound and fundamental shift in mind-set is needed to address Korea’s lack of Muslim-friendly infrastructure.

“The root of the problem is our mentality toward Islamic culture,” he said. “In Korea, public debate and media coverage of halal overly highlights its religious aspect. However, halal is just another way of life simply different from ours. For Muslims, it means the food was prepared in a cleaner way.”

Seo added even with certifications for restaurants, Korea still lacks proper halal slaughterhouses, and the problem could easily be solved by hiring more Muslim workers. “It’s sad to see why people think of it as such a difficult task,” he said.

“Muslims are a growing population in the world, and their economic power is rising, too,” Seo said. “Korean companies hesitate to shift their manufacturing facilities to halal due to cost issues, but my opinion is that if they want to expand business to a global level in the future, going halal-friendly is not a choice but a must.”

“Korean companies and service providers consider halal difficult and complicated because they identify halal as a certification that differs by country and requires going through certain procedures to obtain,” said Yoon Yeo-doo, chairman of the Halal-Biz Forum under the Korea Federation of SMEs. “However if Korean companies consider halal as simply something that is ‘permissible’ for Muslims, as is the literal meaning, they can easily approach the industry by offering what Muslims can eat, wear and use.”