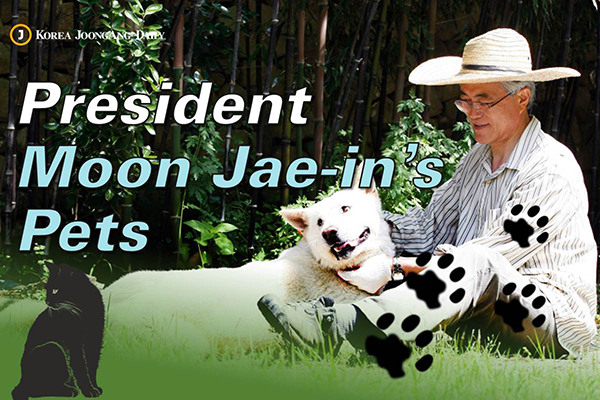 President Moon Jae-in and his wife moved to the Blue House last Saturday with their pets Jjing-Jjing and Maru. Tory, an abandoned dog that Moon is in the process of adopting, will join them soon, becoming the first abandoned dog in the world to become a so-called first pet.

2) But Moon and his wife Kim Jung-sook were not the only new occupants. Their pets, first cat Jjing-Jjing and first dog Maru, also moved in.

3) So-called first pets have often lived with presidents at the Blue House, representing the animals of the nation.

4) People’s awareness of the first pets increased after Park left her dogs in the Blue House following her impeachment. Some people criticized her for abandoning the dogs and being irresponsible.

5) But it seems different this time. Moon’s cat Jjing-Jjing already lived with him. He even tweeted about his concern for his cat and the birds residing in the Blue House.

“Jjing-Jjing moved in, but I have a concern. There are five baby redstarts living in a nest between the cracks of the windows. Jjing-Jjing used to surprise me bringing the dead birds to our house in Yangsan [in Gyeonggi].”

6) Jjing-Jjing was once a stray but was adopted by Moon’s daughter Da-hye. After she got married, President Moon has been raising him.

7) The cat was already well-known to the public from the 2012 presidential election, which Moon failed to clinch, as he vowed that he would bring the cat to the Blue House if elected. Five years later, Jjing-Jjing became the first ever first cat.
Jjing-Jjing is also very loyal to Moon. The cat used to catch mice and birds and gift them to him in their house in Yangsan.

8) Maru, the new first dog, is a Pungsan, a breed of hunting dogs native to Korea. It is said that Pungsans are so brave they can even catch tigers.
Besides Jjing-Jjing and Maru, there is another soon-to-be first pet ― Tory.

9) Tory was abused by an old man. The dog was rescued by an animal protecting organization Care, but no one has been willing to adopt him due to his color.

10) Animal protection organizations, including Care, carried out a campaign named “Abandoned dogs to be Korea’s first dogs!” during the election. The organizations suggested the presidential candidates should adopt abandoned dogs and Moon announced that he will adopt Tory if elected.

“By determining to adopt Tory, I want to show my belief and philosophy that both humans and animals have the right to be free from discrimination.” — Moon

11) And Moon kept his promise. The Blue House officially announced yesterday that they are undergoing the process to adopt Tory.

12) In fact, Moon’s love for animals is well known. He made promises on enhancing animal rights, named “Five Major Commitments for South Korea where Pets are Happy”.

13) No abandoned pet has ever become a first pet. If Tory moves to the Blue House, the dog will be the world’s first abandoned dog to be a first pet. The animal lovers’ hopes are rising to see Jjing-Jjing, Maru and Tory’s new life in President Moon’s care.

14) In addition, people are also looking forward to seeing a better nation where both humans and animals can happily live together. In five years, will this nation be the “South Korea where Pets are Happy”?


Written and Designed by Son Min-young
Edited by Jim Bulley