Mr. Sung, a 34-year-old office worker, lives by himself in Mapo District, western Seoul. In the past, he would visit a large discount store once or twice a month to stock up on groceries and daily necessities.

Lately though, he hasn’t been shopping there much because he gets all his groceries at a nearby 24-hour convenience store.

“I used to think goods sold at convenience stores were more expensive, but they offer various promotions like buy one, get one and private-brand goods that they produce themselves,” he said. “I only bought stuff like water at convenience stores in the past, but now I do most of my grocery shopping there.” 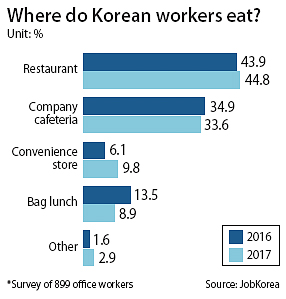 Recently, convenience stores have added fresh fruits and vegetables to their panoply of offerings, which already included items unconventional for a convenience store, such as precooked meals and hot coffee. The average convenience store now carries about 5,000 products, and a number of them have surpassed 10 million sales annually.

Coffee, samgak gimbap (triangle-shaped rice balls wrapped in seaweed) and instant noodle cups were some of the most popular items last year.

One of the biggest reasons why more products saw their sales skyrocket is because more of them are being made under private brands.

About three years ago, popular items like energy drinks and banana-flavored milk produced by big-name companies had more than 10 million sales.

But now, the same goods produced by private brands are also achieving 10 million sales. CU’s private brand sales rose 7.6 percent year on year in 2013, but that figure increased dramatically to 28.9 percent in 2015 and 35.3 percent by 2016.

At 7-Eleven, its Seven Cafe coffee sold 27 million last year. This means about 30 cups of coffee were sold each day at 4,200 stores across the country.

A tepid economy might also explain the spike in products achieving more than 10 million sales a year at convenience stores. These items tend to see more demand from people who want to save on food and drink costs during slow times.

According to a survey by employment website Job Korea, Korean workers spent an average 6,100 won ($5.44) on lunch, down 4.2 percent from a year ago. This was the first time that the cost had dropped compared to the previous year since the company began compiling the data in 2009.

More workers are opting to eat lunch alone, which helps them save money but also represents a shift away from traditional Korean work culture where communal dining has generally been preferred. About 12 percent of respondents in Job Korea’s survey said they eat lunch alone.

“Demand for meals and coffee sold at convenience stores is rising as there are more single-person households and those who prefer eating alone,” said Lee Gang-chul, a marketing manager at GS25.

Convenience stores are now also working hard to diversify their private brand products because it allows them to earn more profit and can be a good marketing tool.

“About 20 to 25 percent of goods sold in our stores are made by us, and I expect the private brand market to grow further from now on,” said Oh Jae-yong, a manager at 7-Eleven.

Still, some products like soju and banana milk made by big companies remained very popular in the country.