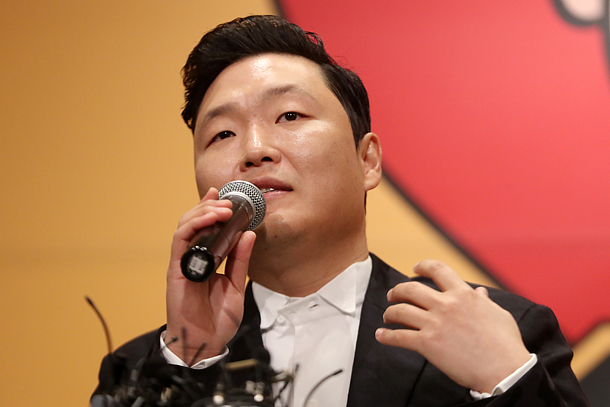 Four songs from Psy’s recent album, “4X2=8” have been deemed unfit for broadcast by KBS regulations.

According to the most recent music consideration results regarding new music published every Wednesday by the channel, the two singles “New Face” and “I Luv it” along with “Bomb” and rapper Tablo featured “Auto Reverse” have been banned from the national public broadcaster.

For “New Face,” KBS said the lyrics were “too vulgar for television.” For “I Luv It,” the broadcaster had problems with the bridge to the chorus, where the lyrics aren’t explicitly curse words but sounds similar when read out loud. The broadcaster banned it on the same reasoning with the former song.

Lyrics to the song “Bomb” also was an issue for use of vulgar expressions, while “Auto Reverse” was banned on the grounds of its repetitive mentions of a particular brand.

However, this ruling won’t be a big hit to the rapper, as many of his songs are performing well on domestic music and international charts. The music videos for the newly-released songs have been performing well also, garnering a huge amount views on YouTube since its release.