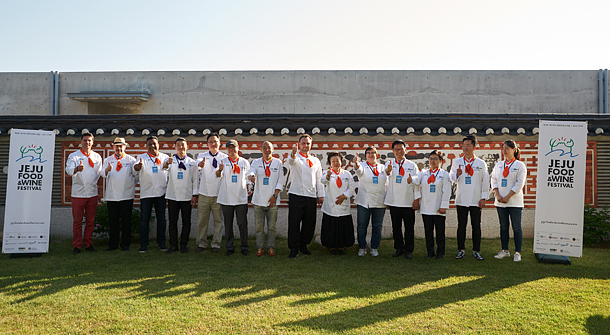 Chefs from Korea and overseas pose to celebrate the second edition of the Jeju Food and Wine Festival at Bonte Museum in Jeju Island. The three-day festival ends today. [JEJU FOOD AND WINE FESTIVAL]

JEJU - There’s always a reason to go to Jeju Island, whether you’ve already been or it’s your first time. For many, this year’s reason was the Jeju Food and Wine Festival, which began Thursday and ends today. It’s the second edition of the annual festival. Organizers hope the enthusiastic word of mouth will spread not only on island but around the world, drawing foodies and chefs from overseas to an entirely new culinary destination. It’s happy to host local visitors too, of course, who come for food and drink they have not yet tried.

“The festival is a type of platform where people living on the island and people from outside can share information so that each of the individuals visiting Jeju can become an ambassador to promote the island as a travel destination to people in their home cities once they go back,” said Chung Moon-sun, president of the Jeju Food and Wine Festival Incorporated Association.

The first trip to Jeju for chef Aleksander Baron of Solec 44 in Poland matches those goals of the festival. He has been constantly updating his own kimchi recipes and serving this most Korean of dishes in his restaurant on the opposite side of the globe. As many people in Poland enjoy fermented vegetables, he wanted to differentiate his dishes by getting inspiration from Korea, which has put the fermented vegetable dish up front to promote its food culture.

People line up at booths to get food prepared by different chefs at the Jeju Food and Wine Festival’s Garden Dinner event Friday at Maison Glad Hotel in Jeju. Cheju Halla University students cook in a competition judged by participating chefs at their school. [JEJU FOOD AND WINE FESTIVAL]

Baron got first-hand Korean food experience at local markets and in kitchens, which he has brought back to his own country. College students who have yet to learn much about the international food scene and the most recent trends are getting second-hand experience from the chefs visiting Jeju by talking to them during cooking demonstrations. They can watch chefs cook, ask questions and taste the food prepared by the chefs at the Garden Dinner at the Maison Glad Hotel in Jeju. To diversify the experiences for locals, the festival invited chefs from many countries in Europe and Asia, which was slightly different from last year when chefs from the United States dominated.

“Inviting chefs from different cultures each year will diversify what the festival can offer, and it will be one of the factors differentiating this festival,” said Chung.

For those who couldn’t make it to any of the events at the three-day festival, the organizing committee also ran Jeju Gourmet Week. Fifty local restaurants that serve food highlighting ingredients found on the island offered discounts or special menus created only for the event until today. It is still not too late to head out and get your fill of Jeju specialties. For more information about the 50 restaurants participating in Jeju Gourmet Week, go to http://jejufoodandwinefestival.com The website is available in English, Chinese, Japanese and Korean.

Dosun Dawon in Seogwipo in Jeju Island is a tea farm where visitors can walk around smelling the scent from tea bushes. Since Jeju is known for its tea farms, many pastry chefs made green-tea-flavored desserts for the festival. Pictured at the right is an eclair made by chef Lee Hyun-hee of dessert cafe Dessertree in Sinsa-dong, southern Seoul. [LEE SUN-MIN, JEJU FOOD AND WINE FESTIVAL]

The fact that Jeju is an island inspires visitors to beeline for seafood restaurants when they come to the island. However, Jeju has other unique specialties that have nothing to do with the sea.

“The environment here on Jeju Island is quite different, with strong winds blown from the ocean,” said Chung Yang-gi, founder of Song Kang Farm, who has been farming for 30 years on Jeju Island, and before that, for over 50 years in Gangwon and Gyeonggi. Chung still has farms in all those provinces.

“The strong winds seem to contribute a lot to making crops and vegetables with stronger scents,” he says.

Among the many plants and vegetables available on Jeju, chefs focus on using gosari, a type of fern available across Jeju. Pastry chefs pay a lot of attention to Jeju’s green tea. As Chung suggests, unique conditions and the volcanic soil improves the flavor of Jeju’s tea.

“The volcanic ash has a lot of organic creatures in it, which offers a strong foundation for the tea trees,” says tea company Osulloc in a research document. “Also, strong wind throughout the year stimulates air circulation, which helps leaves take in more nutrients.”

Two pastry chefs contributing their talents to the festival used green tea for color. Chef Lee Hyun-hee of Dessertree in Sinsa-dong, southern Seoul, made a green-tea-flavored French eclair to serve to visitors to the festival’s outdoor Garden Dinner. Chef Seong Hyun-ah of dessert cafe Sona in Sinsa-dong, southern Seoul, collaborated with chef Park Jin-sun of dessert cafe The Simple in Seogwipo, southern Jeju, and created millefeuille made with vanilla beans and green tea. The dish is available until today at The Simple for 8,000 won ($7.11), as part of the Jeju Gourmet Week promotion. A set with a cup of coffee is 10,000 won.

If you are getting worried about the extra pounds you might get after eating such desserts, head out to tea farms on the island. While the most visited is the Osulloc Tea Museum, where one can try out different drinks made with tea leaves and buy souvenirs, there are quieter, less visited farms. Dosun Dawon, a farm located in Seogwipo, is a good option for a walk of about an hour. Each time the wind blows, visitors can smell the raw green tea. Sometimes pheasants, which were once abundant on the island, can be spotted on the farm.

Fostering the next generation

The Jeju festival stands out with its programs for aspiring chefs and restaurant management experts. The organizing committee allotted a full-day to cooking seminars by local and global chefs for college students majoring in fields related to the food industry.

Students at Cheju Halla University on Thursday got to see live cooking shows by some Korean talents including chef Tony Yoo of Dooreyoo, Edward Kwon of Lab XXIV and Cho Hee-sook, as well as some international culinary experts including chef Baron of Solec 44 in Poland and Maria Grazia Soncin of La Capanna Di Eraclio in Italy, a third generation chef. Students helped prep ingredients for the show in advance to learn how chefs manage in the kitchen. They also got to chat with them between each session to ask questions, or have a quick taste of what’s cooked on stage.

The festival offered more this year than last. It had students compete with their own creations prior to the start of the festival, and the dishes by the two top contending groups were cooked on stage after live shows by professional chefs. The winning team made steamed and then fried octopus along with a risotto made with potatoes, shiitake mushrooms and onions. It took home a two million won prize.

“There isn’t much opportunity to enter a cooking competition in Jeju and this was my first one,” said Kim Hyeon-su , sophomore at Cheju Halla University. “The most memorable part was when chef Edward Kwon commented that the taste of main ingredients were distinctively expressed in the dish.”

Such a program is why the festival can go on for years in the future, said Chung, president of the festival’s organizing association.

“The partnership made by the festival with a local university can help Jeju’s resources in the tourism sector be developed further by the next generation of chefs and service managers currently in school,” said Chung.

Wine as a bridge

Some may question whether it would be better to try to promote local drinks rather than wine as companions to food featured at the festival. But chef Cho Hee-sook disagrees.

Many restaurants on Jeju offer wine by the glass at an affordable price, like 5,000 won at Italian restaurant The Spoon. Some restaurants and bars have taken the lead to introduce so-called natural wine, a type of wine that’s been getting a lot of international attention for its environmentally-friendly manufacturing process, at places like French Turtle. Luxury hotels like Hidden Cliff Hotel and Nature have hosted wine markets to give locals on the island a chance to buy various wines, as what’s available in shops is limited.

Encouraged by such changes on the island, Keumyang International, which participated in providing wine for the event last year, decided to join again. Another importer called The Vin CSR also joined hands this year.

“With more resorts and hotels developing [promotions], not only do wine sales go up, but also the types of wine sold are more diverse in Jeju,” said Kim Joon-goo, a marketing and public relations manager of wine importer Keumyang International, adding that the company is seeing about 10 percent growth in Jeju sales compared to last year.

“Thanks to consumers who are looking for wines that suit their taste buds, overall wine consumption is going up.”

Meanwhile, international chefs are bringing Korean liquors out of the country. Some of the chefs from nearby countries including Japanese chef Koizumi Koj of the restaurant Kohaku, the youngest Japanese chefs to win three Michelin stars, and his Chinese counterpart Albert K.K. Au of the restaurant The Eight at the Macao Grand Lisboa, also the youngest Chinese chef to earn a star, participated in making a traditional drink from Jeju called Noggo’s Tear.

“I think Korean liquors go especially well with Chinese food, as they work well before, in the middle of, and after a meal,” said Au.

It is often hard to find non-Chinese drinks that go well with Chinese food as the dishes use so many different types of sauces.

“Since knowing the exact taste of liquor is important to pair it with food, I’m delighted that I got to learn more about the drinks this time, and hope I can come up with some creative Chinese dishes that can be paired with Korean drinks.”