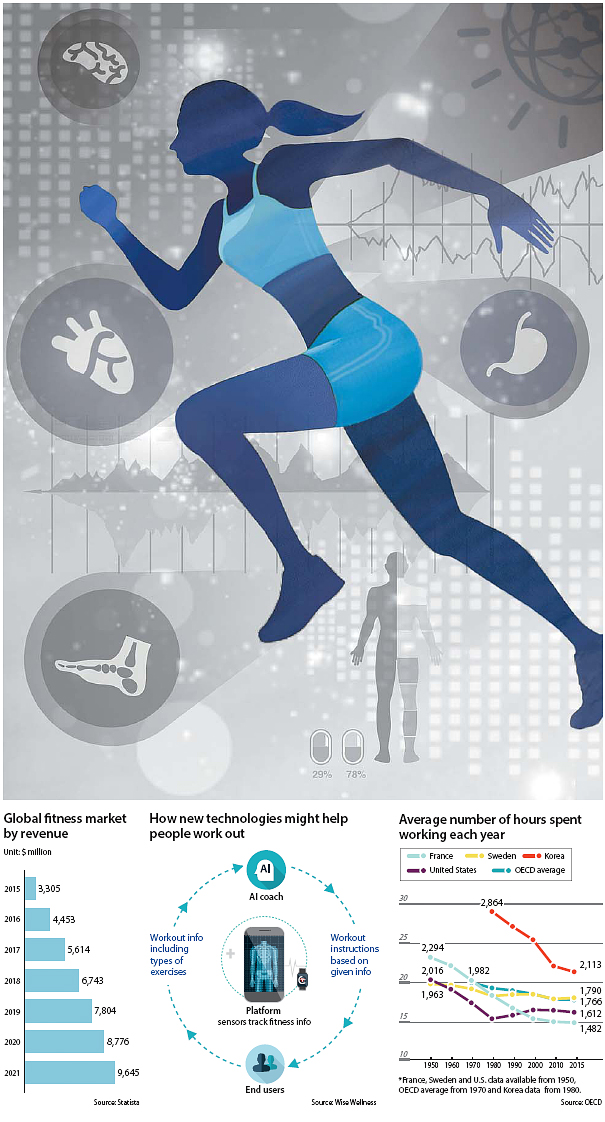 Kang Byung-kyu, the CEO and founder of health care startup Genoplan, distinctively recalls the day that he officially started his company - January 29, 2015. He had one clear goal in mind as he signed a lease for his office in Gangnam, southern Seoul: to provide an affordable, fast, and practical DNA testing service to the public.

A 30-year-old office worker in Seoul and fitness enthusiast surnamed Lee recently became a beneficiary of Kang’s dream. He had been wondering what type of exercise would be best for him, and after hearing about Genoplan he decided to try the service himself.

The test revealed that Lee’s genetic code suggests he has excellent muscle recovery time but a weak cardiovascular system.

“I have been wondering why I get more tired than others and am unable to get the most out of my workout sessions when I run or swim,” said Lee. “Now, I know that my cardiovascular system is innately weaker than others.” Lee was advised to concentrate on increasing his muscular endurance.

The convergence of emerging technologies and fitness has the potential to offer bespoke programs, based on personal data such as DNA, for dieting and exercise at affordable prices.

“We are living in interesting times,” wrote Vittal Devarajan, head of marketing and strategy at HCL Technologies, India, and Bejoy Joseph George, global sales head at HCL Technologies, Germany, in a report on the World Economic Forum website. “The trends that underpin Industry 4.0 mean consumers are now on the cusp of a hyper-personalized era with fundamental changes in terms of choice, consumption, ownership and our overall experience of products and services.”

The fitness industry, which is projected to grow from $3.3 billion in 2015 to $9.6 billion by 2021 in terms of revenue according to Statista, a market research and statistics portal, will also be at the mercy of such a trend.

Kang, the Genoplan CEO and a former gene researcher, believes that “A person’s DNA holds the key to the personalization of their fitness and diet.”

Research by Stanford University Medical School indicated that using genetic data in a person’s diet increases the chance of success by as much as five times. Out of 500 subjects, those who went on a personalized diet program based on their genetics lost an average of 5.98 kilograms (13 pounds) while those who did not shed an average of 2.08 kilograms.

Genoplan analyzes a person’s genes from his or her saliva and pinpoints any variations. Comparing variations to a pool of genetic data, Genoplan’s analysis provides detailed information on various elements including body mass index, triglyceride levels and adiponectin levels.

Based on this data, Genoplan connects customers with hospitals, fitness trainers and health care experts based on their needs. It has also launched a service where companies can recommend products catering to customers’ specific lifestyles and genetics.

The company has received 5 billion won from major investment companies such as SoftBank Ventures Korea and Samsung Venture Investment.

While Genoplan utilizes genetic data, Welt Corp, a start-up that spun off from Samsung Electronics’ incubator C-Lab last July, decided to track data measurable from a person’s waist by utilizing a “smart belt.”

The Welt belt, which targets regular office workers and is sold by Beanpole, a Korean fashion brand by Samsung C&T, measures a person’s waist size as well as the number of steps they take. The attached sensors send information to an application and can even detect whether a person overate depending on the changes in waist size, which also can be used to estimate calorie input and output.

The company received 90 million won in funding from crowdfunding platform Kickstarter last year and was well received at this year’s Consumer Electronics Show.

Dr. Kang Sung-jee, the founder of Welt, said “Once enough data is accumulated, certain patterns will emerge, which could be used to point out any anomalies on certain users’ data and prevent diseases in advance.”

The scanner measures body composition such as lean and fat mass and creates a full 360-degree image of a person’s body with measurement accuracy down to the nearest millimeter.

The device is already in use at major U.S. hospitals and on sale at various locations of Equinox, one of the biggest fitness chains in the United States. It can be used to identify diseases such as osteoporosis, in which posture is a key part of diagnosis.

All the accumulated data and personalized fitness programs, however, will be worthless unless people actually do the exercise. Experts say that the reason why 80 percent of people who flood into local gyms at New Year leave by February is because motivation runs out quickly.

For Michael Schmidt, the co-founder of Icaros, a virtual reality exercise machine developer under German company HYVE, the elements of fun and competition using VR technology are key to encourage people to exercise.

An Icaros user gets to glide through a virtual canyon while wearing VR goggles on a steel machine. The body frame is designed in such a way that it requires tremendous core and abdominal strengths to be able to control the movement.

The exercise itself is akin to doing a plank, but according to the pilot test result by the company, the amount of muscle stimulation on abdominal areas is more than doubled when using Icaros in comparison to a traditional plank.

“We will offer communities the chance to work out together and compete against each other,” said Schmidt in an interview with the Korea JoongAng Daily. “Personalization, virtual team events, perfect monitoring, health-oriented, full-body workout and very entertaining [are key aspects of how fitness would look like in the near future].”

Other firms, however, decided to turn their eyes to simpler workout routines that do not involve machines.

According to the U.S. Centers for Disease Control and Prevention, adults from 18 to 64 years old should do two hours and 30 minutes of “moderate-intensity aerobic activity” every week and muscle-strengthening activities more than twice a week “that work all major muscle groups” to stay healthy and fit.

FitMoney, a smartphone app that Wise Wellness released in February this year, tracks the five movements and provides various rewards to motivate users so they can meet the CDC’s recommendations.

The personal training that comes with the application may soon be handled by artificial intelligence. “Given we track only simple body movements that do not require weights or machines, data can be easily patternized, enabling machine learning for AI to eventually increase the level of complexity of service,” Kim said. The company is currently in the negotiation process with potential investors for funding which could amount to more than 3 billion won.

Wise Wellness is a member of a project led by Hanmi Pharm that aims to improve the health of office workers in Korea. The project aims to investigate how to prevent insulin resistance syndrome, also known as metabolic syndrome, a serious health condition which could lead to diabetes and cancer. Lack of physical exercise is one of the key causes of the disease, which is likely to be exacerbated in the fourth industrial revolution.

“People will become physically less active due to the penetration of smart technologies into their daily lives,” said Kim Do-kyun, a professor of sports marketing at Kyung Hee University, referencing emerging technologies such as self-driving vehicles as examples. “Life may become more convenient but people need pleasure stemming from physical activities in order to maximize their quality of life.”

Kim added that with the fall of working hours, there will more be more opportunities for leisure, which should be used to compensate for the lack of physical activity.

Estimates by the OECD show that average yearly working hours have been falling across the globe, especially in advanced countries.

“Throughout the past industrial revolutions, the average daily working hours have gone steadily down,” explained Kim. “It went from 12 hours to less and less with the advent of advanced information technologies and automation of production by the machines. This will be more apparent in the era of the fourth industrial revolution.”