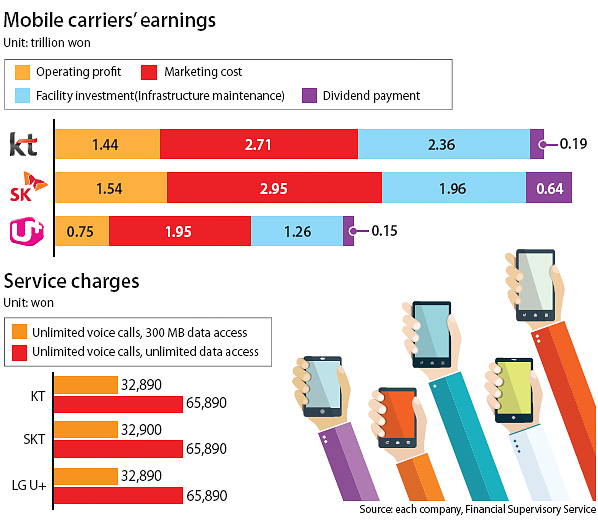 The monthly bill for unlimited LTE data services with voice calls is 65,890 won ($58.65) with all three Korean mobile carriers. Given that service charges for the providers are the same, civic group People’s Solidarity for Participatory Democracy (PSPD), has raised suspicion of collusion.

The civic group reported its suspicions to the Fair Trade Commission on May 18.

The mobile carriers are brushing off any allegations, stating that the charges are similar because the quality of the service isn’t much different.

The basic service charge on unlimited voice calls and access to 300-megabytes of LTE data service was the same for KT and LG U+, 32,890 won a month. SK Telecom’s charge was just 10 won more for the service, according to PSPD.

KT, the second-largest service provider, was the first to add a service charge in May 2015. The two other companies came up with similar plans soon after.

As the No.1 carrier, SK Telecom received government approval for the service charge plan; KT and LG U+ needed only to report it to the government without additional approval.

“It’s easy to see other mobile companies coming up with similar service charge plans when one of the mobile carriers comes up with a new plan,” said Shin Hyun-deuk, a PSPD official. “It’s hard to understand the situation unless it’s a collusion.”

Some analysts say price competition should be natural especially considering the nature of the industry of fierce competition in attracting new subscribers. But the current service bill plan raises suspicions of a silent cease-fire between market players.

“It’s not a collusion when everyone unfolds their umbrella when it rains but when everyone is holding up a black umbrella, one could suspect collusion,” said Lee Joon-gil, former FTC official and senior adviser at the law firm Jipyong. “When all of the three mobile carrier’s service plans are similar, it is unnatural as holding up a black umbrella.”

The mobile companies say that in meeting consumers’ demand for cheaper smartphones, price competition is focused mostly on the device subsidy rather than on the service charges.

“The phone, text messaging and data services are all similar among the three mobile carriers, and that’s why the services charges are similar,” said an industry official. “[People] don’t see soju, whose prices are similar [among different brands] as a collusion.”

The antitrust agency conducted a similar investigation in 2011 but after two years it said that the evidence was insufficient.

The civic group also reported to the FTC that the mobile carriers charging 11,000 won as a basic fee was a manipulation of the mobile carriers’ dominance of the market. The PSPD argues that since the network infrastructure is already installed, burdening subscribers with 11,000 won on installing telecommunication network continuously is an unfair practice imposed on the consumer.

But mobile carriers say that even when the infrastructure is installed, it still costs to maintain the network infrastructure and therefore charging customers basic fees is fair. They say abolishing the 11,000 won charge will lead to massive losses on maintenance costs.