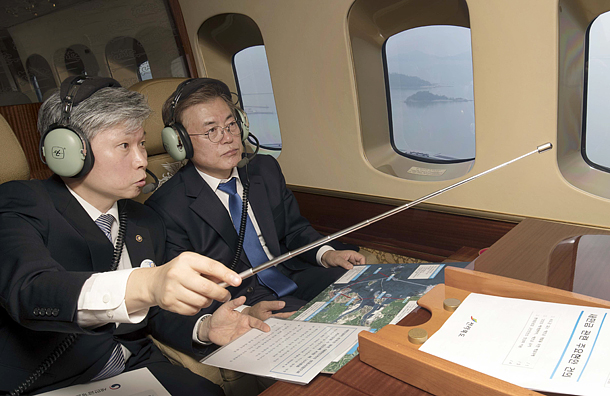 President Moon Jae-in, right, views the Saemangeum land reclamation project from a helicopter with Lee Byoung-gook, head of the Saemangeum Development and Investment Agency, on Korea’s west coast Wednesday. Moon said his administration would give full support to developing the region. [YONHAP]

President Moon Jae-in on Wednesday pledged his administration’s full support for Korea’s flagging shipping and shipbuilding industries, promising a litany of policies including higher government spending on R&D and acceleration of infrastructure projects.

“The shipping and shipbuilding industries are key parts of the nation’s economy,” Moon said at an event celebrating Marine Day in Gunsan, South Jeolla. “Such industries are also very important for national security during wartime. Korea has the world’s best competitiveness when it comes to shipping and shipbuilding, and I will help them find that competitiveness again through financial support.”

Moon promised to help local shipyards secure orders and steer focus to building environmentally-friendly ships. Action items include replacing old ships with new ones and having the government order more vessels from local builders for public use.

Moon also pledged to raise the government’s budget for research and development in ocean-related projects from the current 3 percent of GDP to 5 percent, which he believes will put Korea on par with other developed countries.

The president also announced plans to continue the Saemangeum land reclamation project on Korea’s west coast, which has been ongoing since the early 1990s. Moon pointed to the development of new harbors and roads as vital to Korea’s role in East Asian shipping.

The shipping and shipbuilding industries have long been credited for Korea’s rapid progression from underdeveloped backwater to Asia’s fourth largest economy. However, oversupply and fierce competition have taken their toll on the local industry, and this has reverberated to other manufacturing sectors, too.

Government data released Wednesday by the Ministry of Employment and Labor showed the average monthly income at large companies with more than 300 employees had dropped 0.7 percent year on year to 5.41 million won ($4,830) in April.

“The negative impacts from the sluggish shipbuilding industry have started to affect the local labor market and spread to other manufacturing sectors as well,” the Labor Ministry said in a press release.

Moon offered a more upbeat message. “I have decided to give new hope to people after looking at shipbuilding factories with no work, seaports with a lack of people working and ports with no jobs,” he said. “I will give new life to our ocean, including the shipbuilding and shipping industries.”