Sharing the joy of reading with others : Former Microsoft executive John Wood shows how books can change the world

Sharing the joy of reading with others : Former Microsoft executive John Wood shows how books can change the world 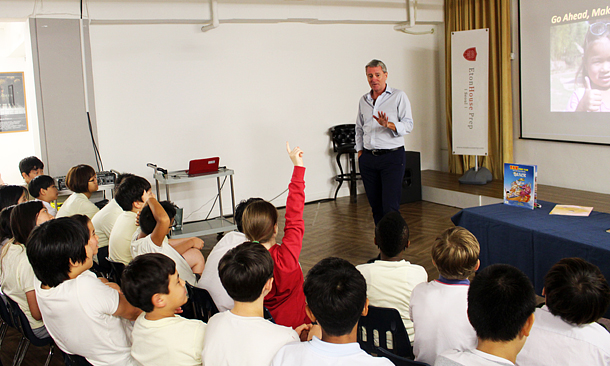 Children at EtonHouse Prep ask questions to John Wood, founder of Room to Read, about how he made his choices and what books he had written. [ETONHOUSE PREP]

Koreans often use the word “luxury” to describe expensive goods made by prestigious foreign companies, but seldom use it to describe books. But in some less developed countries, reading materials are the epitome of a luxury.

Social entrepreneur John Wood sees the chance to speak to Koreans as an opportunity to encourage a new audience to give a helping hand to “Room to Read,” a nonprofit organization he founded after serving as an executive for Microsoft’s business in China. He wants people in Korea, who are known for their immense interest in education, to think more about sharing books with those in need in other countries. The organization, which is headquartered in San Francisco, aims to reach out to 15 million children by 2020 and currently provides education to about one million children every year.

To speak to people of all ages in Korea during this visit, Wood spoke at EtonHouse Prep, a private academy for preschoolers in Hannam-dong, central Seoul, as well as at a networking event put together by start up accelerator SparkLabs at COEX, southern Seoul, on Wednesday.

Eliminating “the lottery of life” is what Wood ultimately wants to do by building libraries, making children’s books in the native tongues of kids who need more books, and running educational programs where young people can learn how to work with these books. 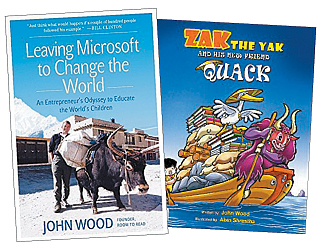 Some of the books John Wood wrote after he founded Room to Read. “Leaving Microsoft to Change the World,” left, tells the story about Wood taking on a new challenge and the other is a children’s book. [SCREEN CAPTURE]

“I think where you are born and to whom you are born are two most important factors in determining what your life will be like as a young person and it ultimately decides whether you get a good education,” said Wood to the Korea JoongAng Daily, “yet it’s completely randomized.”

“My goal is to take the randomization out of the system so that no matter where you are born, groups like Room to Read can reach you at young age and get you better educated.”

As he was once part of the tech industry looking for chances to succeed and make more money, he often finds his speeches on giving back work better to those in the tech community, one of the largest donor demographics to his organization. Wood considers the educational opportunities afforded to him gave him the chance to work for big companies and he sees how important early childhood education is to inspire people and get them started on their career path.

When he visited Nepal and met young children who were in a school that had a library with no books, the students ask him to bring books if he ever came back. He did return with yaks carrying books after he quit his job.

“I think the tech community likes what we do because we realize that technology is very competitive, so unless you have a great education, you can’t possibly do well in tech,” said Wood. “So my message to them is that this is your chance to get to a child who might not otherwise ever get literate.”

The medium to inspire locals here to give were his books. For techies, he used “Leaving Microsoft to Change the World,” which describes what inspired him to do what he does now. To the young kids and their mothers at EtonHouse Prep, it was a children’s book he wrote titled “Zak the Yak and His New Friend Quack,” to encourage young kids at the EtonHouse Prep to read more, while their parents can provide education to kids besides their own children. The academy is considering doing a read-a-thon with its students as a way to raise awareness on the importance of reading.

“It really is a win-win as a read-a-thon implicates the value of reading to kids as opposed to them just spending all their time doing something else,” said Wood.

The EtonHouse Prep plans to be the leading group to spread the words on “Room to Read” in Korea and aims to raise 35 million won ($30,630). It plans to hold a gala and a read-a-thon to encourage children to read more and to learn about sharing. The exact dates are not yet decided.