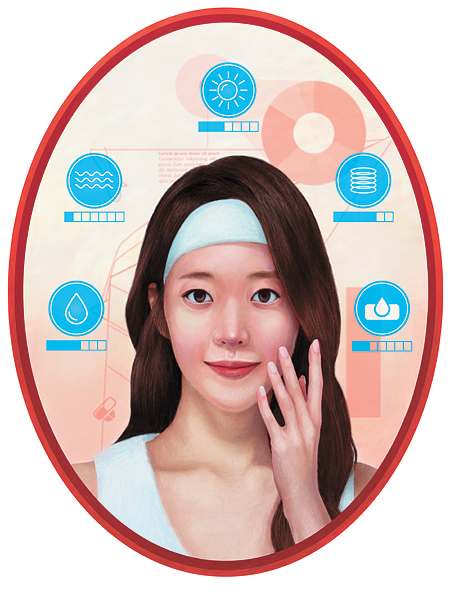 One corner of Aritaum’s flagship store in Gangnam, southern Seoul, resembles a scientific laboratory with white walls, a large desk, consultants in white lab coats and a device known as a facial skin analyzer.

This is the Iope Bio Lab, where people can take skin tests and receive Iope’s product samples to treat various skin conditions.

“If you see here,” one consultant told this reporter, “the skin beneath your eyes and by your cheek bones barely produces sebum so try to avoid these areas when you use peeling products because they can irritate the skin.”

The facial skin analyzer showed sebum inside the pores in red. The 60-minute course provided details about wrinkles, pores, pigmentation and moisture. Among the seven Iope Bio Labs nationwide, the Myeong-dong branch offers a 90-minute intensive course that includes a one-on-one consultation with skin experts who hold graduate degrees in pharmaceuticals and bio science. Reservations for this particular branch were fully booked through July.

In the beauty industry, bespoke products are the new trend and since last year, companies like AmorePacific, LG Household and Health Care have begun to provide customized skin serums, moisturizing creams and lipsticks. According to a report last year by the Korea Cosmetic Industry Institute, Korean woman typically express seven different concerns regarding their skin, including spots, darkness and wide pores.

“Because there are so many ways to care for the skin,” said a spokesperson at AmorePacific, “the younger generation seems to be increasingly drawn to personalized products.” 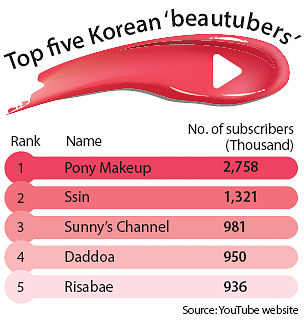 “The desire to find a product that perfectly fits one’s needs before actually making a purchase is more common in Korea than in other countries,” said Kim Jung-eun, founder of Powder Room, Korea’s biggest online community for cosmetics, with more than 1.7 million members. “[That’s because in other countries] there aren’t many individual review sites, just comments on e-commerce platforms.”

Kim added, “This is because Korea has a highly developed cosmetics industry and trend-conscious consumers, not to mention Korean consumers tend to enjoy sharing word-of-mouth information with one another.”

With the advent of smart phones and certain internet platforms, access to such information has become easier than ever before. Before YouTube, for example, cosmetics reviews were mostly made up of online blogs, but now many have shifted to video.

As a result, YouTube personalities who specialize in reviewing such products, such as Pony and Ssin, have reached incredible heights; Pony now has 2.7 million subscribers, while Ssin has 1.3 million. Both attach English subtitles to their videos and a lot of the comments below are from foreign fans written in English. Korea’s top five beauty YouTubers, called “beautubers” for short, all have at least 900,000 subscribers. For example, Ssin is famous for tutorials on how to imitate makeup used by K-pop celebrities, including boy band singers like G-Dragon. An outspoken character, some of her reviews are so frank that she does not hesitate to openly criticize poor-quality brands.

The growing popularity of these beautubers reflects a change in the demographics of those interested in beauty products. A recent trend in the Korean beautuber scene is the advent of male hosts, from former comedian Kim Ki-su, who uploads tutorials using bold color cosmetics, to Cosmetic Reader, who provides detailed lectures on skin care and acne - demonstrating the growing market of men’s cosmetics. Indeed, sales of men’s cosmetics at Olive Young grew at an average of 40 percent annually between 2014 and 2016.

Mobile applications that rank and analyze beauty products, such as Hwahae, are another way technology has made reviewing cosmetics easier. Hwahae, downloaded over one million times on Android’s app market, has over 2.2 million five-star rating reviews and ingredient analyses of over 87,000 products. For every product, the app shows a full list of the substances it contains with a one-to-three scale indicator of harmfulness to the skin. Most ingredients rated “dangerous” are additives used to impart certain colors or scents.

Son Min-young, 24, said she uses the application every time she buys cosmetics.

“Even in stores, if I find something I want to buy I check the product on Hwahae first to see if there are any harmful ingredients,” she said. Son added that as a result, she changed the foundation she had long been using after checking its ingredients using the app. 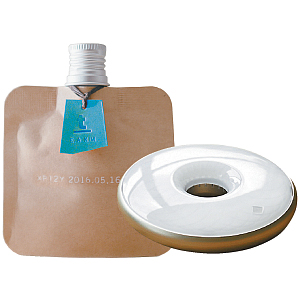 Beauty brands are also upgrading their products and services to satisfy consumers’ desire to understand skin in detail and therefore be able to use products with greater expertise.

WaySkin is a donut-shaped device that detects the moisture level of one’s skin when gently pressed against one’s face. Sensors on the other side of the device detect environmental factors like humidity or UV light. The smartphone app connected via Bluetooth then alerts the user when it is time to rehydrate the skin or reapply sunscreen.

“Unlike wrinkles or pores, moisture level is a factor that may change on a daily basis and an influencer to many other skin troubles,” said WayWearable CEO and Founder Jason Moon on why he chose to focus the device on measuring moisture as opposed to other skin factors.

Other devices use cameras to take measurements. Made by a Taiwanese company of the same name, HiMirror is composed of a large mirror-like screen attached to a round camera on top. Upon holding up one’s face in front of the camera for three seconds, the device will analyze the user’s skin on five criteria, including brightness, clarity and firmness, rating them on scales of one to 100. As it saves its results, the mirror also shows which skin factors have improved or worsened compared to previous tests, and if you register your products at home via the app, it also devises a personalized skin care regime based on those items.

One interesting recipient of this year’s CES Innovation Awards was a hairbrush. Co-developed by L’Oreal and French tech company Withings, the Kerastase Hair Coach identifies frizziness, dryness or split ends by capturing soundwaves made when the brush combs through the hair. It also detects movement and alerts users with vibration if their brushing motions are too rough. Users also receive tips on brushing habits and product recommendations through the Kerastase mobile app.

Conducting skin measurements in person is particularly spreading among leading companies at their brick-and-mortar stores. Like AmorePacific’s Iope Bio Lab, LG Household and Health Care’s CNP Cosmetics makes personalized serums on demand based on skin tests conducted on site. The 50-milileter bottle, later attached with a label of the consumer’s name, is made with one of three base serums and two among five functional ampules.

Local start-up Toun 28 took personalization to a new level by measuring different parts of the face along with environmental factors like temperature, humidity and UV to produce new products for each consumer. The company offers a subscription for which a consultant first measures four parts of the face - chin, forehead and the areas around the eyes and mouth - then sends products every one to three months according to the test results, combined with Toun 28’s algorithm, which predicts the consumer’s needs based on seasonal changes.

“Around half of Korean consumers have skin that is neither moist nor dry,” explained Toun 28’s co-founder, Jung Maria. “But it’s complex, which means parts of the same face have different skin types.”

The development of personalized cosmetics abroad is concentrated on color cosmetics, as regulations for mixing new skin care products on demand are restricted in most countries. U.S.-based MatchCo and Lancome both make foundations that perfectly match one’s skin color based on scientific tone assessments.

Lancome’s Le Teint Particulier is made and mixed at the store upon scanning shades at certain Nordstrom stores in the U.S. MatchCo enables users to send skin tones via smartphone and mobile camera.

Customizing products according to genetics analysis is another area beauty manufacturers are eyeing. AmorePacific and LG Household and Health Care both found partners in genetics research and bioengineering last year to boost research in this area.

The first local company to launch in this area is Hankook Cosmetics, which unveiled the brand “Generte” in April. The analysis is done after consumer gargle liquid, which is used to provide information on skin firmness, the degree of aging and pigmentation. Then consumers receive proposals of one among 120 skin care product routines.

Despite the marketing buzz and competition among local companies, industry insiders say personalized cosmetics in Korea is still in its infancy, and that there needs to be more data in order for customized cosmetics to truly cater to personal skin features.

One reason there is not sufficient data is because it has not been long since the Ministry of Food and Drug Safety officially allowed on-demand production of customized cosmetics. The system is still in its test-operation and only companies registered with the ministry in advance can offer such services. So far, only 30 have done so.

But regulating customized skin care products raises complex issues, the first being safety. If cosmetics are made differently each time according to the consumer, this may create a gray zone in terms of quality control, which for mass-produced products can be more easily done at once.

“For example, if a brick-and-mortar store mixed a ‘customized formula’ of brands and the consumer experiences skin trouble,” said a spokesman for the ministry, “who should be held responsible?”

The second question is the efficacy of personalized beauty products: Can the assertions of research institutes that develop these products, mostly part of big cosmetics companies so far, be acknowledged as scientifically objective? When discussing a product’s clinical efficacy on the skin, there needs to be a figurative measurement of how much improvement the product has incurred and whether that change is meaningful compared to other products. But because customizing skin products is still a new practice, there is not enough consumer data or a standard system to clinically assess how effective these products are.

Professor Kim Ju-duck of beauty industry at Sungshin Women’s University said that the skin features measured by companies today are too trivial to make customized cosmetics. “There needs to be more advanced technology,” he said, “like measuring the skin’s degree of aging, instead of simply recommending existing products based on small details of the skin.”

“Ensuring product safety and proving efficacy in comparison with mass-produced products are the first tasks I believe are necessary to enlarge the market for personalized cosmetics,” said Researcher Sohn Seong-min at the Korea Cosmetic Industry Institute. “Once consumers can be confident that they are more effective than the products they used in the past, expanding the market and consumer base will not be difficult. But in order to do so, marketing and science R&D should go hand-in-hand.”