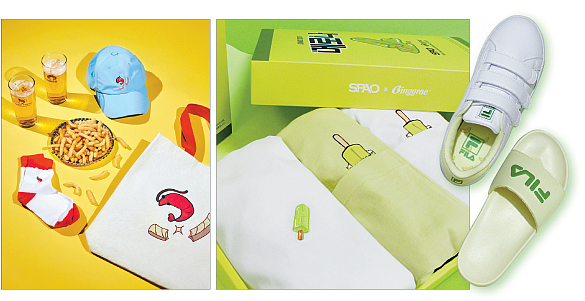 Old Korean snacks are making a comeback as food makers are collaborating with fashion brands to introduce shirts, bags and other accessories fitted with their retro logos.

First released in 1971, Saewookkang is Korea’s first mass-produced snack and has recorded eight billion sales through June, according to Nongshim. “The collaboration was planned in order to add a trendy image to the old steady seller,” the company said in a statement.

Rival food maker Binggrae did a similar collaboration last month with E-Land Group’s fashion brand SPAO. The series included 16 items, most of them T-shirts, designed with patches or patterns from the food maker’s famous ice cream products including Melona, B.B.Big, Samanco and Summer Crush, all classic best-sellers that were released over two decades ago.

Binggrae has been particularly active in working with fashion brands to feature its top-selling melon-flavored ice cream Melona. In May, the summer treat was used as the concept for Fila’s special lineup of shoes and slippers colored in Melona’s iconic pastel green color. The sneakers’ inside bottoms were printed with melon graphics.

According to the company, the first batch of 6,000 pairs was sold out in just two weeks.

The SPAO T-shirts have also been popular. Around 40 percent of the prepared amount was preordered before the official release, while other products of a similar price typically post 10 percent preorder rates.

Aside from fashion goods, Melona’s design was recently applied to other consumer items like kitchenware. In late June, 7-Eleven began selling green sponges shaped like Melona. They even come with a wooden stick.

A Melona toothbrush is set for release next month.

And on Friday, Lotte Foods announced a giveaway for sundries resembling its popular Daeji Bar ice cream released in 1983. The prizes include a canvas bag, mini electric fan, supplemental battery and stationery designed with images of the ice cream.

Food makers hope the collaborations will give their products’ staid image a fresh twist among the younger generation. Promotional events like giveaways for customers who upload photos of the food product on social media are frequently conducted simultaneously in line with the release of associated apparel.

“Most of the brands that organize collaboration projects and goods are old steady sellers that have been around for a long time, so there’s a limit to publicizing them in traditional ways like ads or simply talking about the products’ features like good taste,” a Binggrae spokesman said.