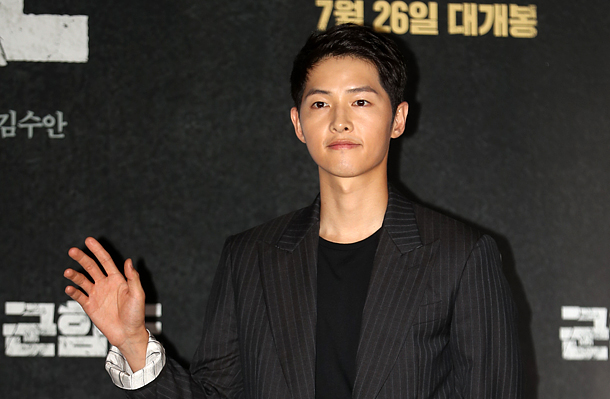 Song Joong-ki at the premiere of the upcoming movie “The Battleship Island.” [YONHAP]

Since his rise to stardom through “Descendants of the Sun,” actor Song Joong-ki has established a public image of a wholesome, upright and humble young actor. But that’s hardly the professional image he wants to settle with.

“The fans see the bright side of the actor Song Joong-ki, but I think I find acting out the dark side (of a character) intriguing,” Song said Monday in an interview with Yonhap News Agency.

The actor, who appears in the upcoming South Korean summer blockbuster “The Battleship Island,” said he wants to explore more complex emotions and try out “chilling” roles in the future.

“I want to try out chilling roles, and more chilling material in terms of genre.”

In “The Battleship Island,” Song plays Park Moo-young, a special forces agent with the Korean Liberation Army, who infiltrates the island to rescue a key independence movement figure from Japan’s Hashima Island during World War II.

The Moo-young character image overlaps a lot with that of his role of Capt. Yoo Si-jin in “Descendants.” Both figures portrayed by Song are highly talented and effective military characters. The 33-year-old, however, disputes such an interpretation.

“Back during ‘Descendants’ I filled the role with my usual image as a person. I injected by own image inside the sly-audacious image created by writer Kim Eun-sook,” Song recalled.

“But the Park Moo-young character in ‘The Battleship Island’ is a role that saves people in the face of death,” he added. “I’ve taken out the light aspect [of my own character] from the role internally and externally.”

Song also said his experience in filming the war movie has made him “learn and feel a lot” as a 33-year-old South Korean adult living in the world. The film directed by Ryoo Seung-wan is inspired by the atrocities and ordeals faced by hundreds of forced Korean coal miners and sex slaves at Japan’s Hashima Island during the war.

“From the influence, I read a lot of current affairs and political news on the internet. Before I primarily read entertainment news on internet portals,” said Song.

Earlier this month, Song made headlines after making a bombshell announcement that he plans to marry fellow actress and co-star of “Descendants” Song Hye-kyo in October. The announcement was made after the couple repeatedly denied rumors that they were dating.

“I thought I could spend my life with Hye-kyo since she is such a wonderful person. She is a senior in terms of acting and a fellow performer, but she has a profound mind,” Song said.

Song said he learns a lot by being next to his fiancee. “I think our values correspond.” He also added that he sees actor Cha Tae-hyun as his role model for fatherhood.

“I never really thought of getting married late in life. I’ve learned a lot from seeing Cha Tae-hyun. I think Tae-hyun is the most awesome person in all of South Korea. He’s a true family man but at the same time isn’t careless professionally.”

When asked whether he’s planning to have multiple kids like Cha did, Song replied with a laugh, “We’ll plan it as we live together.”