Many young workers skeptical if changes will affect conditions

Many young workers skeptical if changes will affect conditions 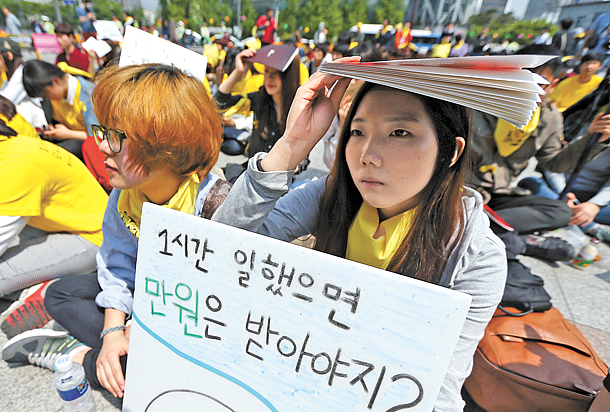 Students in alliance with pro-labor organizations and parties protest in front of Bosingak Bell, central Seoul, to push for legislation that would ensure teenage workers’ minimum wage and basic rights. [YONHAP]

This series features articles written by high school students participating in the Korea JoongAng Daily’s internship program. All articles were written under the guidance of our staff reporters. -Ed.

An 18-year-old high school student surnamed Kim, sighed profoundly and sat down in the office of Naeil, a social welfare center that specializes in adolescent labor rights in Incheon.

“I just got what the employer paid me; I did not know what else to do,” Kim told Rosa Lee, a counselor at Neil. Kim had been paid significantly less than the minimum wage at a small restaurant where his daily wage would be taken away in the name of “training.” If he were to quit the job within three months, Kim was forced to pay for the alleged loss as stipulated in the employment contract.

Today, countless teenage workers like Kim work hard without getting the wage they are legally entitled to. According to the Ministry of Gender Equality and Family, one out of every four high school employees were paid less than the minimum wage in 2016.

That is why teenage part-time workers, like 16-year-old Park Yong-ho are skeptical regarding the recent minimum wage raise; to them, their working conditions seem just as bleak as ever before.

“A drastic raise in the minimum wage will discourage honest employers from hiring more teenage workers [because of the] financial pressure it gives them,” said Park.

As he predicted, 80 percent of the employers registered on Alba Heaven, a job seeking website, now consider cutting employees in the next year due to the financial constraint inflicted by the minimum wage raise. Experts anticipate that high school students, who are relatively unskilled and inexperienced, would be most likely the first ones to be laid off.

“High school students, unlike adults, are left largely vulnerable without the necessary knowledge and education to avoid misleading employment contracts,” an official from the adolescent human rights center revealed.

She further claimed that contrary to President Moon Jae-in’s remark that the minimum wage raise is a historic turning point in workers’ rights, there is still a lot more to be done to improve high school students’ work conditions.

Advocates of adolescent labor rights, including Lee, also insist that the Ministry of Labor and Employment needs to increase minimum wage enforcement, until the new hourly wage is instituted by all employers.

“Until then, I will continue to pick up my pen and phone, listening to hundreds of students’ unfortunate first work experiences,” Lee concluded.