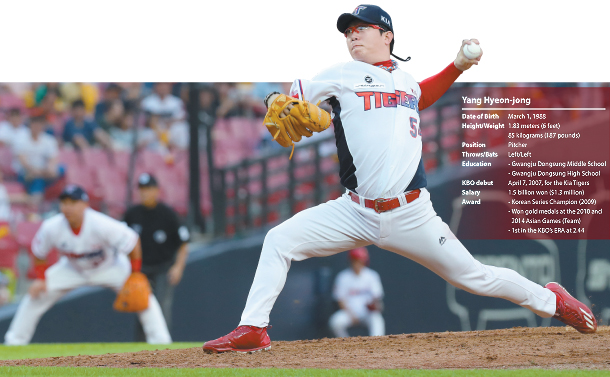 Yang Hyun-jong of the Kia Tigers pitches against the NC Dinos at Gwangju-Kia Champions Field on Tuesday. [YONHAP]

With another victory on Tuesday, Yang Hyeon-jong of the Kia Tigers is the leading pitcher of the Korea Baseball Organization (KBO) this season, picking up a total of 17 wins.

During the game against the NC Dinos in Gwangju on Tuesday, Yang only gave up one run and two hits in seven innings to lead the Tigers to a 4-2 victory. Yang’s 17th victory has allowed him to exceed his personal record for the most number of wins from his 2010 and 2014 season. Not only that, during the Tigers’ game against the Dinos on July 13, he picked up his 100th career victory, becoming the fifth southpaw in KBO history to do so.

Aside from Yang’s record this season, overcoming his weakness has received greater attention. Throughout his career, Yang failed to perform in the second half of the season, where he tends to lose speed and control in his pitches.

Yang started his role as a starting pitcher in 2010. In the first half of the season, he recorded 12 wins and three losses with an ERA of 3.43, but in the second half, his ERA rose to 5.88 while only picking up four wins and five losses. Then, in 2013, Yang picked up nine wins in the first 13 games and recorded a 2.15 ERA, ranking second in the KBO’s most number of wins.

But shortly after, Yang was off the starting rotation due to an injury, and once he returned, he wasn’t able to pick up another win for the remainder of the season.

Last season, Yang pitched 200 innings, and during the offseason, he had to undergo rehabilitation for a shoulder injury. Right before the season, he also participated in the World Baseball Classic representing Korea. As a result, he had a far more tiring season than many other players, but has managed to return stronger.

This season, Yang has a winning percentage of 85 percent. For the rest of the season, he is expected to start about seven to eight more games. Based on his winning percentage, it is likely he will pick up 20 victories in all, which hasn’t been done in the Tigers’ history since Sun Dong-yol, current manager of the Korean national baseball team, in 1990. Moreover, he’ll be the third left-handed pitcher in KBO history to pick up 20 wins in a season.

“Picking up 20 wins in a single season requires some luck,” Yang said. “But considering our record this season, I want to challenge myself for the record.”

In addition, Yang hopes to top the category for the KBO’s most number of wins for the first time since his debut. This may put his head-to-head with his teammate, Hector Noesi, but based on two players’ performances in the second half of this season, Yang is will likely maintain his spot at the top.

Right now, Yang is being given more responsibilities on the team, as Hector Noesi is struggling, recording a 4.13 ERA in four recent games as of Tuesday. Also, the young pitchers Im Gi-yeong and Jung Yong-woon have shown a lack of experience. And the Tigers aren’t as dominant as they were in the first half of the season, recording 11 wins, one tie and nine losses in 21 games as of Tuesday.

That said, Yang is focused more on staying healthy. If he pitches more than 200 innings this season, he’ll be the second pitcher in the KBO, since Ryu Hyun-jin of the Los Angeles Dodgers, to pitch that many innings for two consecutive years.

“I’m going to put aside the thought,” Yang said. “To do my best condition in the next few games. I can’t be obsessed about the number of innings I pitch. I just need to try my best in every situation.”