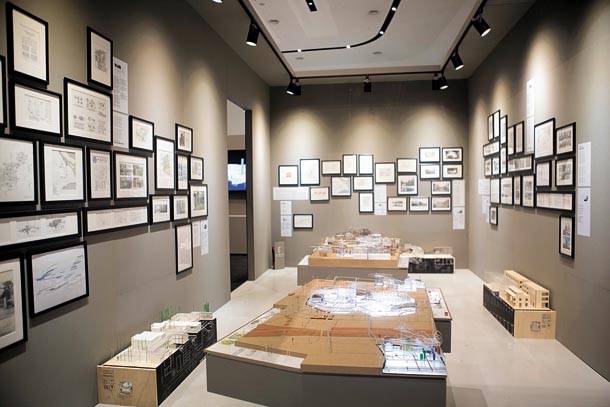 An exhibit within the Cities Exhibition at the Dongdaemun Design Plaza in central Seoul shows the current status of cities around the world, and how architects may overcome issues in a sustainable way. Pictured exhibit is by H. Koon Wee, Eunice Seng, Darren Zhou and Lam Lai Shun of SKEW Collaborative and University of Hong Kong. [SEOUL DESIGN FOUNDATION]

As the host city of the biggest architecture event in the world, the Seoul Metropolitan Government, in collaboration with the Seoul Design Foundation, has organized the Seoul Biennale of Architecture and Urbanism to create the city’s own large-scale architecture festival. Until Nov. 5, the event will utilize buildings and locations around the city to offer a deeper look into rebuilding the future of Seoul under the theme of “Imminent Commons.”

If the International Union of Architects (UIA) Seoul World Architects Congress is held for the purpose of gathering together the world’s leading architects to share their unique styles and visions for the future of architecture, the Seoul Biennale will focus more on actual architectural experiments that may be implemented in the near future.

The two main sections - the Cities and Thematic Exhibitions - will take place separately at the Dongdaemun Design Plaza (DDP), central Seoul, and the Donuimun Museum Village, also in central Seoul. As it takes less than 30 minutes to get to Donuimun from DDP, guests will be encouraged to take a look at both for a better understanding of urban architecture.

The Cities Exhibition starts with “Letters to the Mayor,” an exhibition of letters to the mayors of cities around the world from architects, urging for better architecture. The project began in March 2014 in Panama. The 1,216-square-meter (13,088 square feet) exhibition space is divided into separate rooms representing 50 cities around the world, from Seoul, neighboring Pyongyang and Shanghai to faraway cities such as Vienna, Oslo and Athens.

One of the most unique sections is the Pyongyang room, where visitors can see a model of an ordinary household in Pyongyang, made up of a living room, a bedroom and a kitchen with a balcony. “The room has been created after research by experts within the field, and some of the props, such as the telephone, have been brought in directly from Pyongyang,” said Choi He-jung, the curator of the Cities Exhibition.

“Regenerating the city involves solving a lot of problems that arise from the growth of a city, such as environment issues and the wage gap between classes,” said Choi. “The exhibits have been made either by the experts or government organizations to highlight their own problems, and start thinking about how to overcome those issues.”

The other main attraction, the Thematic Exhibition in Donuimun Museum Village, is no ordinary exhibit with work hanging on the walls. Rather, the whole village has been transformed into a block of galleries that each contain different contents.

Within the village are works by 38 teams that are centered around the idea of sustainable urbanism. “Driverless Vision” by the Spanish team of Urtzi Grau and Christina Goberna, for example, is a giant dome with projections that depict the visual field of a digital vehicle that drives on its own. By showing how artificial intelligence perceives and travels around the city, visitors get a sense of how artificial intelligence differs from human senses, and how it may change the face of our society in the future.

Other exhibits include a mini version of “The Lowline” underground park in New York which utilizes sunlight from outside to grow plants in the basement, the Biennale Restaurant which will use ingredients organically grown in its garden and the Biennale Cafe which will serve drinks in renewable bamboo pulp cups.

Other projects are available in different parts of the capital, such as the Sewoon shopping complex in central Seoul, Seoullo 7017 near Seoul Station in central Seoul and movie screenings at Ewha Womans University in western Seoul.