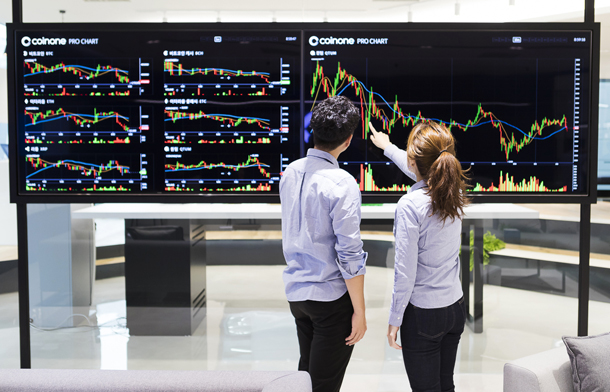 A screen at Coinone Blocks, a brick-and-mortar cryptocurrency exchange from Coinone in Yeouido, western Seoul, provides market information on six currencies traded by the company. Coinone Blocks is the first branch in the world that allows offline digital currency trading, the company claims. [COINONE BLOCKS]

Coinone, the company that runs one of the leading digital currency trading platforms in Korea, opened Coinone Blocks, a brick-and-mortar branch that enables offline cryptocurrency exchanges, on Monday in Yeouido, western Seoul.

Coinone is a fintech firm that specializes in blockchain technology. In addition to its cryptocurrency platform, the company operates Cross, a blockchain-based service that allows customers to send money overseas.

Coinone Blocks offers not only all the services that consumers can expect through the online platform, but other services including face-to-face consulting on cryptocurrency trading, the company said in a statement.

The company claimed that the offline branch is the first brick-and-mortar trading floor for cryptocurrencies in the world. Although the currencies are gaining huge popularity, especially in Korea which is one of the top ethereum markets in the world, all trading and exchange services are currently online. 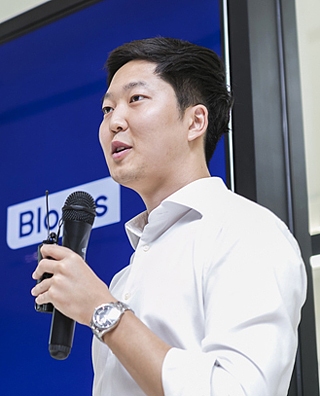 Coinone Blocks is intended to fulfill the needs of consumers who want to receive tangible services, explained a Coinone spokesperson.

Cha Myung-hun, CEO of Coinone, said that the purpose of Coinone Blocks is to create a healthy and transparent ecosystem for digital currencies.

Recent cases in Korea have raised concerns among market watchers that digital currency exchange, which is unregulated right now, may be prone to crime. Earlier this year, one of the top exchange platforms in Korea was hacked, leading to funds and user information being stolen. Last week, local law enforcement reportedly caught a group of drug dealers who used bitcoin as a way to sell marijuana.

As a result, consumers in Korea are calling for a more secure means to exchange cryptocurrencies. Solutions presented by Coinone to address such concerns at the physical branch in Yeouido included “hard wallet,” a digital wallet for cryptocurrencies in the form of a USB, as well as automated teller machines dedicated to bitcoin exchange.

The venue also has market trading screens that show the market information of six digital currencies that can be traded at Coinone, including bitcoin and ethereum.

According to Coin Market Cap the total volume of bitcoin traded in the past 24 hours as of 6 p.m. Monday stood at about $1.6 billion. In the same period $84 million was traded on the three leading trading platforms in Korea.

The global trading volume over that period for ethereum was $655 million. The three Korean platforms traded $170 million of the currency. For bitcoin cash the global total was $293 million. In Korea $144 million was traded.