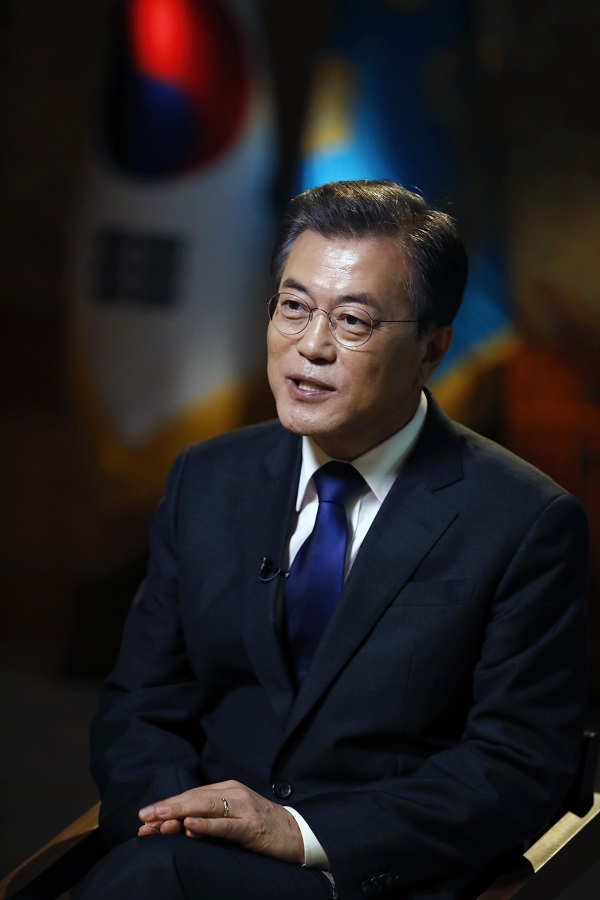 Korean President Moon Jae-in has an interview with CNN in the Blue House on Thursday. [YONHAP]

President Moon Jae-in on Thursday dismissed the idea of a nuclear-armed South Korea, rejecting growing public discussion of whether atomic weapons are needed to counter threats from the North.

It was Moon’s first interview since Pyongyang’s sixth and most powerful nuclear test on Sept. 3, following a series of missile launches. The North claiming to have detonated a hydrogen bomb that can be loaded onto an intercontinental ballistic missile. “North Korea continues to make very wrong decisions, so I’m very frustrated and I’m saddened to see this,” Moon told CNN. “It’s a very reckless choice made by North Korea that is not helpful to North Korea itself or inter-Korean relations and threatens world peace.”

Following the Kim Jong-un regime’s latest round of nuclear brinkmanship, calls are growing for a return to South Korea of American tactical nuclear weapons. Some conservative politicians even say that the South needs to develop its own nuclear weapons. “If we respond to the situation with an attitude that we will counter a nuclear-armed North with a nuclear-armed South, peace cannot be maintained between the two Koreas,” Moon said. “Furthermore, it will trigger a nuclear arms race in the entire Northeast Asia and hinder peace and prosperity of the region.”

While the North is pursuing nuclear arms program in defiance of an inter-Korean denuclearization pact and the Nuclear Nonproliferation Treaty, the South has remained nuclear-free since all American nukes were withdrawn in 1991.

Moon also addressed speculation that the alliance between Seoul and Washington is being strained after his U.S. counterpart, President Donald Trump, slammed his approach to Pyongyang. “South Korea is finding, as I have told them, that their talk of appeasement with North Korea will not work, they only understand one thing!’’ Trump said on Twitter in response to the North’s nuclear test. “I don’t think his tweet should be interpreted in a narrow way,” Moon said, dismissing the concerns about any rupture on the alliance. “I think President Trump wanted to emphasize that not only South Korea and the United States but also China and Russia all need to respond very firmly toward the North’s nuclear provocations.”

The interview took place ahead of a trip by Moon to the UN trip next week. The Blue House said Moon will visit New York from Monday through Friday. “We are planning bilateral summits with five to six countries, including the United States and Italy,” said Nam Gwan-pyo, the second deputy director of the National Security Office of the Blue House. “The summit partners were selected based on the need to seek their cooperation to counter the North’s nuclear crisis, bilateral relations and effectiveness to promote the Pyeongchang Winter Olympics.”

Moon will also deliver a speech at the UN General Assembly. The speech is expected to set the tone of his policy shift toward the North. In July, Moon made public in Berlin his desire to engage the North and proposed inter-Korean dialogue, efforts ignored by Pyongyang.