From left: The Lotte Giants greet fans after defeating the LG Twins 2-1 at Jamsil Baseball Stadium on Sept. 12. Lee Dae-ho poses for a photo after signing a four-year deal with the Giants in January. [YONHAP, JOONGANG PHOTO]

When Lee Dae-ho returned to the Lotte Giants at the start of the year he made five predictions, setting the tone for the rest of the season. Now, with the playoffs around the corner, Giants’ supporters are starting to suspect that Lee may just be able to follow through will all five of his promises.

It all started when Lee addressed the team’s weakness against the NC Dinos, their local rivals. The Giants concluded the 2016 season only winning one game and losing 15 against the Dinos. 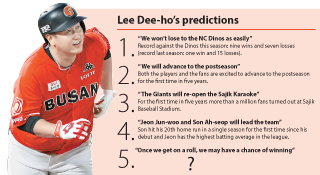 “The Giants were weak, especially to the Dinos,” Lee said during the signing ceremony. “[Now that I’m back,] there’ll be no result like last year’s. There’re a lot of Giants’ fans in Masan and Changwon. I’ll try my best to bring them back to Sajik.”

The NC Dinos are based in Masan and Changwon. Before the team was founded in 2011 the area swung strongly toward the Giants.

Coincidentally, the Giants had their opening three-game series against the Dinos this season. As if to prove his point, Lee hit his first home run of the season in his first appearance in the batter’s box, in front of 20,000 Giants fans at home. Throughout the games against the Dinos, Lee had a 0.382 batting average with five home runs and 14 RBIs.

Before Lee left the KBO and headed to Japan, the Sajik Baseball Stadium was known as the “loudest karaoke on Earth.” From 2008 to 2012, over a million fans passed through Sajik’s turnstiles every season. But after Lee left many fans stopped coming - the team’s record started to fall apart.

“We’ll prepare for our season well so more and more Giants’ fans can return to Sajik Baseball Stadium,” Lee said during the signing ceremony.

Lee wasn’t wrong. Despite the team struggling during the first half of the season, the Giants’ fans once again have something to cheer about as the team heads into the postseason. For the first time in five years, the team is nearing the one million fan mark. If just 30,000 more people visit Sajik this year, and with three home games left to play, it’s likely Lee’s prediction was right.

“I need to be the center balance in the Giants’ batting lineup,” Lee said.

Just as Lee boldly claimed, he has proven himself as the Giants’ key player this season, with 33 home runs and 107 RBIs. Lee’s record during the month of August shows the accurate correlation between Lee and the Giants’ performance throughout the season. In August, Lee hit the most home runs in the KBO and had the second highest RBI.

When Lee said that the Giants had to finish in the top three to avoid the wild card game it seemed like he had gone one prediction too far. The team was languishing in seventh place at the time, and showed no real sign that they had any chance of climbing up the rakings. But in August the Giants jumped forward, recording 19 wins and only seven losses.

Now, the Giants are only one win away from setting the club’s record for the most wins in a single season. There is even still a chance that the Giants could overtake the Dinos and take third place going into the postseason.

“Jeon Jun-woo, who is returning from the military and Son Ah-seop, who’s already a starting player, will play well this season,” Lee said prior to the start of the season. “Behind me, there’s Kang Min-ho and Choi Jun-seok. If we all work hard, our team will play better.”

Interestingly, Jeon and Son have both had by far the best season of their careers. Son, who made his KBO debut in 2009, hit 20 home runs for the first time in a single season and Jeon has the highest batting average in his KBO career, at 0.318.

“The only reason behind my return to the Giants is to win,” Lee said during the media day prior to the start of the season. “The players need to work together as a team and once we get on a stride, we may have the chance to win.”

Since four of Lee’s five statements seem to be coming true, fans and players are now turning their attention to his fifth promise - and by far his most important. Lee said that if the Giants can get on a roll they have a shot of winning the Korean Series. The team hasn’t won the title since 1992, but with Lee at the helm this might just be the year.