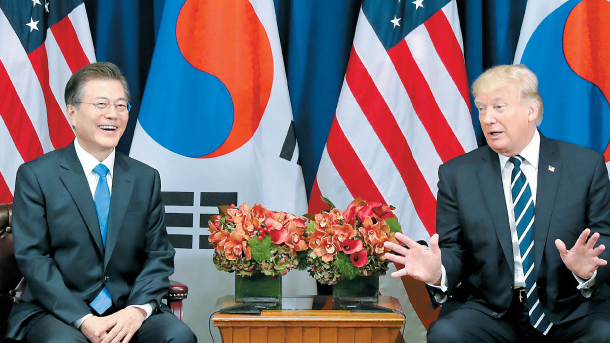 South Korea will beef up its military with advanced arms from the United States to counter North Korea’s escalating threats, President Moon Jae-in and U.S. President Donald Trump agreed during their latest summit.

The two leaders sat down for a bilateral meeting on the sidelines of the UN General Assembly.

“They agreed that maintaining superior military capabilities to overwhelm the North is critical,” Park said. In addition to the procurement projects, the two leaders agreed that the U.S military will expand rotational deployments of strategic assets to the South and neighboring areas.

A senior presidential aide said the leaders agreed to the principle of Seoul’s procurement of advanced arms. “No discussion took place yet on what specific systems will be purchased,” he said.

“There are issues concerning U.S. regulations on sales of strategic arms to another country,” he said. “Since the two presidents had an agreement, discussions will take place on what strategic assets will be traded.”

Moon has made public his ambition for South Korea to build nuclear-powered submarines to counter the North’s submarine-launched ballistic missile technology. He expressed the wish to Trump during a phone talk in August. Park, however, said it was not specifically discussed during the summit.

The two leaders agreed to continue their discussions in November when Trump visits Korea.

The agreement for Seoul to purchase advanced arms from the United States is linked to the Korean military’s plan to complete three systems to counter the North: the Kill Chain pre-emptive system, the Korean Air Missile Defense System and the Korea Massive Punishment and Retaliation program. Massive procurements are necessary to realize the plans.

Even if Seoul and Washington agreed that the South will build nuclear-powered submarines, transfer of U.S. technology is crucial. It will take at least five years to complete the project. Each submarine will cost at least 2 trillion won ($1.76 billion).

The biggest obstacle will be the Korea-U.S. nuclear energy agreement, which bars Korea from owning uranium enriched beyond 20 percent. Using low enriched uranium will require the submarine to replace the fuel at least once every seven years; cutting the hull of the vessel for refueling is a mandatory process. U.S. nuclear-powered submarines use highly enriched uranium of 90 percent; their refueling cycle is 30 years.

Following the summit, Moon also attended a trilateral meeting with Trump and Japanese Prime Minister Shinzo Abe. The three leaders agreed to put maximum sanctions and pressures on the North to force it to return to denuclearization talks, said Foreign Minister Kang Kyung-wha.

According to Kang, the three leaders agreed to seek the support of China and Russia. She also said Trump reiterated the U.S. commitment to defend Korea and Japan.

At the meeting, Moon expressed appreciation to Trump for signing an executive order to impose additional sanctions on the North and promised his government’s cooperation.

In a meeting with reporters inside the presidential plane before departing for Seoul, Moon said, “Right now, I see only one option,” he said. “It is the international community’s pressure on the North in one voice.”

Meanwhile, the Blue House strongly complained to the Japanese government on Friday over “malicious reports about the Korea-U.S.-Japan summit.”

“Japanese media reported that leaders of the United States and Japan spoke negatively about Korea’s decision to offer $8 million to help North Korea’s vulnerable population,” Yoon Young-chan, senior presidential press secretary, said. “An official accompanying Abe was quoted as saying that Trump was extremely angry. But a Korean official who attended the summit said the reports are completely groundless and there seemed to be an intentional distortion.”

Yoon said it is a diplomatic courtesy to not elaborate on specifics of a summit. “Such behavior can damage the friendship between Korea and Japan,” Yoon warned.

Earlier in the day, Nippon TV reported that Trump and Abe pressed Moon on the timing of the humanitarian aid plan. A senior Japanese official was quoted as saying that Trump was extremely angry and Korea will have to shelve the plan.

Earlier this week, Seoul decided to offer humanitarian aid worth $8 million to the North through UN agencies, without setting a schedule. “Moon explained the plan to Trump and he gave a simple response,” a Blue House official said.