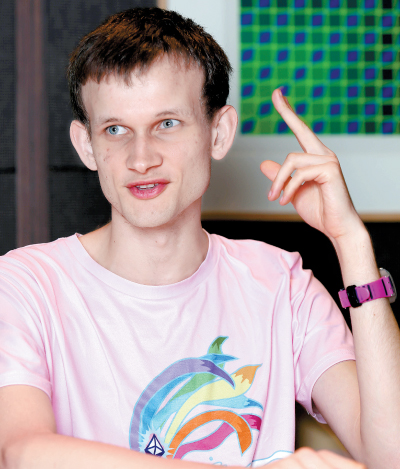 Vitalik Buterin, co-creator of the cryptocurrency ethereum, during an interview with the Korea JoongAng Daily and JoongAng Ilbo on Sunday at the InterContinental Seoul COEX in Gangnam District, southern Seoul. Korea is the largest market for ethereum, the second-leading cryptocurrency in the world by market cap after bitcoin. [CHO MOON-GYU]

Ethereum miners may have to find something else to mine soon, the cryptocurrency’s own co-creator, Vitalik Buterin, said during an interview in Seoul on Sunday.

The 23-year-old programmer famous for creating the world’s second-largest cryptocurrency by market capitalization said his research team is working on a system that will change the way people obtain coins to the point of possibly making miners obsolete, at least for ethereum.

Mining constitutes an important part of any cryptocurrency ecosystem and is considered a crucial factor in the survival of cryptocurrencies. Miners solve computational problems to obtain tokens, and the puzzles they solve ensure transactions are securely added to a blockchain, which splits and stores data from transactions among participants to make them nearly unhackable. The higher the number of participants, the harder it is to hack the transactions as hackers would have to pry open computers of all the participants to gain the end information.

Buterin, who was born just outside Moscow and raised in Toronto, has been working with a team on a system known as “proof of stake,” where coins can be rewarded based on how much ethereum one already owns. Theoretically, one could obtain tokens without having to solve any of the computational problems. 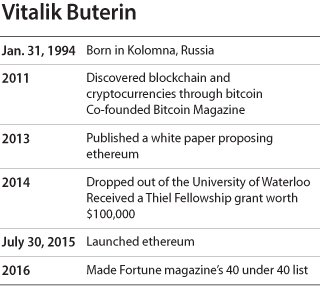 The Korea JoongAng Daily and JoongAng Ilbo exclusively interviewed the founder of ethereum on Sunday during his visit to Korea for an ethereum conference. Below are edited excerpts from the interview.

Q. You said you first came across bitcoin at the age of 17 and were completely captivated by it. What about bitcoin stimulated your interest?

A. I initially heard about it first from my dad, then again on the internet. I was curious enough to take a deeper look and try earning some bitcoins and spending them to buy a T-shirt online. I immediately found the idea of an open financial system, and the idea that a community of a few thousand regular people with a few thousand regular computers could all by themselves create and maintain such a system from scratch, very attractive.

While you started out as an avid supporter of bitcoin, you decided to create a whole new blockchain system and protocol. What compelled you to make such a decision?

Making an improvement on top of bitcoin requires getting the approval of the existing bitcoin development team, and I saw even in 2013 that many of them were very hostile to nonfinancial uses of the bitcoin blockchain, going so far as to make protocol changes to prevent such uses. So I decided to make an independent platform instead.

How did you learn programming and coding?

I started learning how to program when I was 10, largely by programming games that I would then play myself. I would spend a week making a game, then another week or two playing it, then go to making another game.

You received the World Technology Award in the IT software category in 2014, beating out competitors like Mark Zuckerberg, the founder of Facebook. What do you think is the reason behind you winning the award over people like Zuckerberg?

Zuckerberg deserves praise for making such a large and influential platform, but I think he has already received a lot of recognition for his achievements. I think that right now, many people are trying to see the next phase in technological progress, and they see the blockchain space as being the source of one of the main tech innovations of this decade.

Many people are also seeing the dangers of very powerful organizations such as governments and large corporations having so much control over our lives with so little transparency, and they are interested in decentralization as an alternative way of organizing things in society.

Satoshi Nakamoto, who claims to have created bitcoin, has never revealed him or herself, completely ruling out the possibility of the developer having any influence on the bitcoin community.

On the contrary, you get involved in the ecosystem of ethereum through the foundation. Who is Vitalik Buterin to ethereum exactly, and what role do you play?

I would say that my influence will naturally decrease as the ethereum community and team gets bigger. I have already had to reduce my role in maintaining the python client, and others are making many of the fine and detailed decisions in protocol upgrades such as Metropolis. I am still leading the research effort that is working on proof of stake and sharding, but this team also is now getting bigger.

Ethereum mining is on a rapid rise in Korea to the point where GPUs are sold out from a local electronics stores. What will happen to these miners in the future?

When we switch to proof of stake, many of the miners will have to drop off the market. Hopefully when this happens, we will have a reverse phase where GPU hardware becomes temporarily very cheap and gamers become very happy. Reducing these kinds of impacts is precisely one of the motivations of the proof of stake switch.

The prices of many cryptocurrencies have skyrocketed this year. In Korea, some investors unfamiliar with the concept of blockchain have decided to jump into the market for the sake of capital profit, raising concerns of speculation. Do you think such a price surge is a short-term bubble?

There are definitely bubbles, but it is very hard to predict when they will start or end.

Other than being a cryptocurrency, what are some of the fields in which ethereum’s technological edges can be well reflected?

I would say that ethereum’s main benefits are in its generality and in its utility to many kinds of industries. There are applications in finance, identity, supply chain tracking, health care, energy and many other areas. This is a result of ethereum deliberately being designed as a general-purpose programming platform.

Many people are paying close attention to the scaling solution that can expand the processing capacity of ethereum. In how many years do you think it will take for the majority of scaling issues to be resolved, making it possible for the general public to take advantage of the platform?

I would say two to five, with early prototypes in one year. The various scaling solutions, including sharding, plasma and various state channel systems such as Raiden and Perun, are already quite well thought out, and development has already started. Raiden is the earliest, and its developer preview release is out already.

Concerns about as well as regulatory measures to control initial coin offering (ICO) is on the rise. Are ICOs a necessary part of the process in the development of a blockchain ecosystem?

However, they also have their flaws, and I think many of these flaws arise from the fact that even though the ICOs are happening on a decentralized platform, the ICOs themselves are hardly centralized; they inherently involve many people trusting a single development team with potentially over $200 million of funding.

There are also not very good incentives for people to produce information to help people determine which projects are worth participating in. I think in the medium term, getting funds with ICOs will get harder, regardless of whether or not regulation is implemented.

China has decided to fully regulate ICOs. The Securities and Exchange Commission has also decided to allow ICOs only when they fulfill all the criteria necessary for initial public offerings.

ICOs are also likely to be banned in Korea. What do you think about the regulatory moves by the nation toward ICOs? Will the regulations hamper technological development?

I think banning ICOs completely will definitely hamper technological development, as we return to the problem that the open-source software industry has had before, which is that software development is very hard to monetize.

Imposing very specific regulations is also problematic at this stage, as rules that are not well implemented can often be either easily worked around or even counterproductive, as they encourage further obfuscation. Deliberate ambiguity, so as to keep open the option to go after truly bad actors, may well be the optimal strategy in the short term.

Central banks are scrambling to issue their own coins. Japan, for instance, is reportedly in preparation to issue J Coin, while a former governor of the People’s Bank of China talked about the need for cryptocurrency that’s controlled by the Chinese government. If blockchains by conglomerates or solutions led by governments do emerge, will they enfeeble the decentralization that public blockchain has aimed for?

What are the important tasks or elements that nation-states should consider in establishing policies for cryptocurrencies and blockchain?

I would say that right now, the space is still rapidly evolving and so it is important not to set policy too early.

What do you think about the possibility of cryptocurrencies replacing fiat currency?

There is a strong economic argument why this is excessive and not likely to happen. The main problem of cryptocurrencies in that niche is that the price of cryptocurrencies is highly volatile. Bitcoin at one point went down by 90 percent. I think as they become bigger, they will become more stable, but they will stay volatile like the stock market.

The problem is if you imagine people storing all of their money in something like this, the size of their assets can fluctuate greatly. A person being paid with two bitcoins may not be able to pay rent if the value of bitcoin plummets. Units of accounts or currencies that people measure things in have to be much more stable than cryptocurrencies.